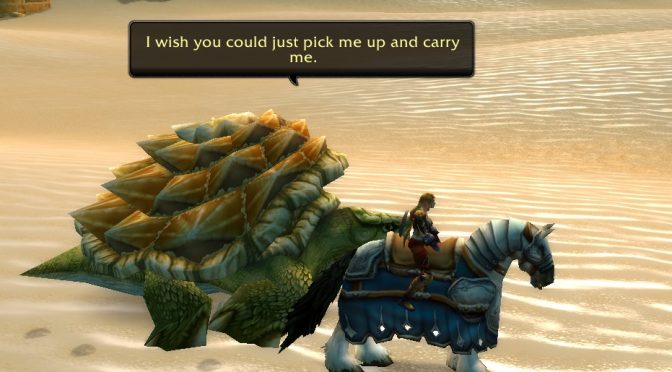 This week for Video Game Tuesday I’m covering my most disliked quest genre in all of gaming. It’s my Most Hated Mission Type!

What is it?: Escort Missions, or Quests. I freaking hate doing these missions because I almost always feel like I have to babysit the NPC I’m escorting, who will do nothing but get into trouble and cause me grief.

Really?: Yeah, so I guess my hatred of the mission first really appeared with my time playing Vanilla WoW as an Alliance player in the Westfall zone. As anyone who played during that time will probably remember, that is the first zone most Alliance players will be in that allowed PvP on PvP servers. There’s one specific quest chain that was in the zone that dealt with the first dungeon many Alliance players would ever encounter, The Deadmines. The very last quest before the one that led to you being instructed to actually venture into the dungeon required you to escort an NPC to the entrance of the building that led into the dungeon. You were required to defeat many spawned enemies, in an area that was full of annoying rogue and mage type enemies as well.

In addition if you were unlucky enough to do it when a Horde player was skulking around they could easily just kill your NPC causing you to fail the quest instantly. This would mark them for PvP, but as most of these people were Rogues who could use the skill Vanish it was rather pointless trying to deal with them even if you were of the same level, which you often weren’t.

But they can’t all be bad!: Well that’s true, Bioshock Infinite for example actually had a great escort mechanic, in that not only did your companion Elizabeth not constantly draw fire onto her (she couldn’t die thank god) she also used her powers to change the battlefield to your advantage. She also threw you ammo occasionally during a firefight which would instantly refill your currently equipped weapon. But she is one of the few exceptions. Most of the time, Escort Quests are still a pain in the ass.

That’s it for this week’s Video Game Tuesday. What are some of your least favorite mission types? Leave your answers in the comments below!