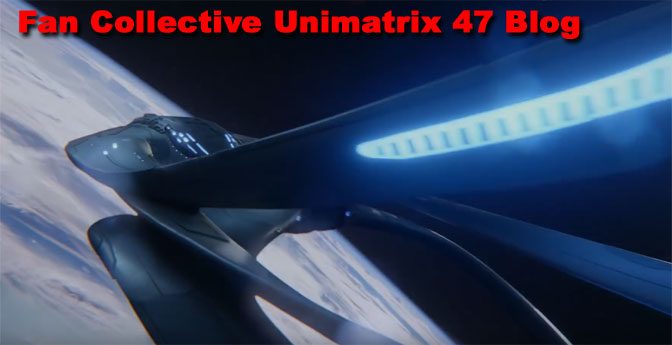 Much like the final two-parter from Discovery, the Orville pulls its title for this episode from Shakespeare’s oeuvre, in this case Macbeth. I could reproduce the entire speech for you, but I think I’ll send you to this version, which features a lesser known Trek actor named Sir Patrick Stewart. The point of the soliloquy is that Macbeth, having lost his wife, now realizes the futility of his actions. Death is coming, and all that he has done to achieve power is ultimately for naught. It’s a fairly dark source material from which to borrow a title for a dramedy, and I wonder if there’s a bit of self-reflection going on here on the part of the writing staff. After all, the central metaphor in the speech compares life to a play, highlighting just how false and ultimately meaningless life itself actually is.

For the Orville, the poor player strutting and fretting his hour upon the stage is Kelly Grayson. The episode opens with LaMarr and Isaac experimenting with a time travel device in one of the science labs because of course they are, and when Grayson comes in to ask LaMarr to turn his attention to another task, a shock wave hits the Orville because of course it does. The shock wave-cum-Macguffin interacts with the device, causing it to pull a much younger version of Grayson from her original timeline into the present. Lieutenant Kelly is seven youngers than Commander Grayson (which is how I will differentiate between the two Kellys), and she hasn’t met Mercer, experienced the failure of their marriage, or even made it into command track as yet. Rather, she’s the freewheeling party girl Commander Grayson has matured past, and weirdly, the show seems to expect us to accept that the episode’s major conflict is going to be whether young or old Grayson is somehow better?

The short answer to this question is that no one really wants to go back to being the person they were in college, and Commander Grayson mostly understands this truth. Mercer, however, struggles with it. He’s already asked Commander Grayson if she’s interested in rekindling their relationship, and she turned him down. Therefore, he opts to engage in a relationship with Lieutenant Kelly. The Orville does not have the best track record when it comes to establishing solid relationships, and while the Mercer/Kelly dynamic is perhaps not the worst relationship portrayed onscreen, there’s a really uncomfortable undercurrent to this May/December romance. If one Kelly won’t date him, certainly the other one will, never mind that there’s an experience gulf, a huge rank gap, and a creepy vibe to the entire thing. Frankly, I have absolutely no idea why Commander Grayson didn’t tell him to his face just how ridiculous his plan was.

Aside from the cringe-inducing relationship, which Mercer only terminates because young Kelly likes nightclubs and because he’s reliving something he’s already done, the episode does feature some pretty fantastic character beats for Palicki to explore. Lieutenant Kelly does not understand how Commander Grayson has seemingly failed to achieve the goals to which Lieutenant Kelly cleaves, and Commander Garyson has to square her current life with the one her younger self imagined. It’s a bit like finding the life plan you wrote in elementary school and realizing that not only have you not become the Rhodes-Scholar neurosurgeon you anticipated you would be, but in Grayson’s case, she actually has to justify where her life is to that younger, less experienced version of herself. The show lets her explore this reality over drinks with the ever-practical Dr. Finn, and between the two of them, they laugh a bit at how the vicissitudes of life alter the goals we end up pursuing because life is not a zero-sum game so much as a process of becoming, if I may borrow a phrase from Anais Nin.

Credit where it is due, Palicki handles both sides of the conflict with herself with admirable skill, which is important as she has to carry the episode with her performance. She portrays Commander Grayson as the slightly irritated voice of experience while adding a brash energy to Lieutenant Kelly that is believable without being grating, despite the legitimately terrible wig they plop on her head for her moments as Lieutenant Kelly. Unfortunately, so much of the good in the episode gets sublimated to the episode’s insistence that the Grayson/Mercer relationship is Very Important, not only to who the characters are as people but perhaps to the entire timeline. The episode ends with Lieutenant Kelly returning to her own time and refusing Mercer a second date, which is likely a set up for the final episode judging from its title: “The Road Not Taken.” I confess that after Season 1, I had hoped the writers room intended to move on from considering the relationship between Mercer and Grayson. I don’t think Palicki and MacFarlane have great chemistry together as far as romantic interests go; their friendship, however, is note perfect. I’d really hate to see the season end with such a heavy throwback to season one’s overarching themes.

Stray Thoughts from the Couch:
1. Bortus and Klyden on the dance floor was hilariously like catching your parents dirty dancing on their way to the bedroom. I love them as the comic relief, but I’m still waiting to see where their relationship goes.
2. If Lieutenant Kelly’s wig is terrible, it is only eclipsed by the awfulness that is Mercer’s pajama shirt.
3. I initially believed that this episode was further evidence that the Orville is a vanity project, but apparently, MacFarlane did not want the Grayson/Mercer relationship to be the main narrative for season two.
4. Congratulations to the cast and crew for being renewed for season three!