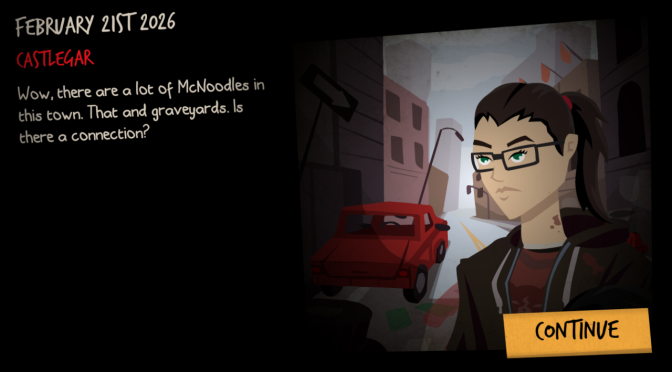 Recently I put Rebuild 3: Gangs of Deadville on my phone to play during quiet times at work.

I picked Rebuild 3 because I really liked Northway Games’ Rebuild.  I’m not really a zombie fan, but luckily I was assigned to review it for Hardcore Droid. and really enjoyed playing it. Rebuild 3 is still about a band of survivors reclaiming the world after a zombie apocalypse. Survivors can be assigned tasks for the day, like scavenging for supplies, repairing the power plant, crafting materials, or of course killing some zombies. This creates that addictive just-one-more-turn feeling we all love in Civ, but Rebuild adds character development and narrative to the usual strategy game experience. Oh, and I mean the old-fashioned kind of strategy game, where you apply strategic thinking to taking territory or planning attackings, not the appointment-style kind of “strategy game” where you have to wait in real time for development of buildings and units, or when you’re prompted to spend real money to get necessary resources. There’s no premium currency, daily check-ins or click-and-wait here. Yes.

New survivors can be rescued from zombie territory, or they can make their own way to the fort and ask to join.  Adults can immediately be put to work, scavenging, farming, killing zed or whatever the band of survivors needs. Lost childen can also be rescued and assigned an adult guardian to look after them. I found a lost little girl and adopted her, and it was the cutest part of the zombie apocalypse. There’s a particular trait that makes a survivor enjoy caretaking, and both genders are equally likely to have this trait. (My aesthetic is buff zombie-slaying dudes looking after cute lil babies. What?)

Survivors come with a randomly generated name, appearance, and outfit, but, as you play, you can give them a weapon and an offhand item for extra stats, and they’ll earn perks every so often. These perks are great, blending character backstory and stat improvements, but I had such fun discovering them that I don’t want to say anything else about them.Players can rename survivors, but definitely don’t take too much care with this because survivors, especially soldiers, don’t always have a long life expectancy. I actually felt really sad when some of my survivors died, especially if they’d been with me a long time, or they were born in the fort, or I got them killed doing something too risky.

My first Rebuild boyfriend got annoying. He kept asking me when we were going to commit to each other, so I felt him behind when I went to the next city.  NOT GOING TO MARRY YOU, APOCALYPSE BOYFRIEND! Except I met a new boyfriend in the next city and I decided to marry him. Moving on…

As your survivors reclaim territory and grow their base, they’ll encounter zombies and as well as other groups of humans. Gustav the trader is back, and so’s the biker cult from the first Rebuild. The Government, a new faction devoted to reestablishing bureaucracy in post-apocalyptic Canada, really reminded me of Maia Sepp’s An Etiquette Guide To The End Times.  Factions can be friendly or hostile, and relationships will be affected by your fort’s government choices. I had to the run the Last Judgement out of town a few times because they wanted our women to stay off dangerous tasks.

The tech tree is the weak spot in a really great game. Well, the tech itself is great, with clever names for useful upgrades. But in each new city, there are new available technologies to research, while the tech tree resets to zero, so players need to re-research technologies they already had. I was annoyed that I couldn’t research anything cool early on, and I couldn’t even see greyed out future techs in early cities. It also made no narrative sense that my engineers all forgot how to make zombie traps or watchtowers every time we went to a new city. Why, engineers, why?

Overall, Rebuild 3 is a great strategy game mixed with an open-ended, post-apocalyptic storyline.