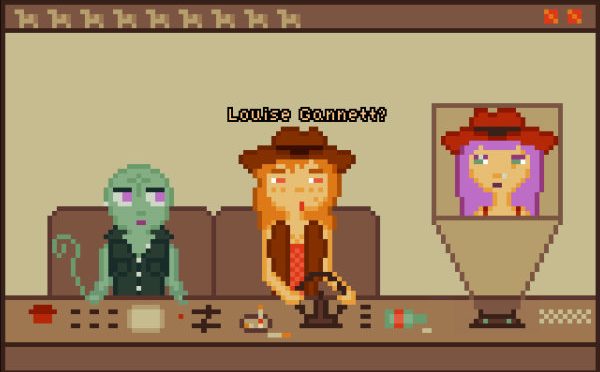 I’ve been playing tons of browser games to review for my students, which means spending a lot of time on sites like Kongregate. I keep getting Til Cows Tear Us Apart in my recommended games, which is probably because a retro space adventure about alien ladies is perfect for me. But I’m usually looking for games to share with my students, and one of the first player choices in Cows is whether or not to pretend to be hookers, and that’s followed by which kind of recreational drugs to buy, so even though I really wanted to see where it led, I realized this was probably not the best choice to introduce to my 10-year-olds.

Wah wah wah, I had to stop playing the game I wanted and go play a different game for work, wah wah, my life is so terribly hard. But I finally had the chance to play it at home, and this game did not disappoint. 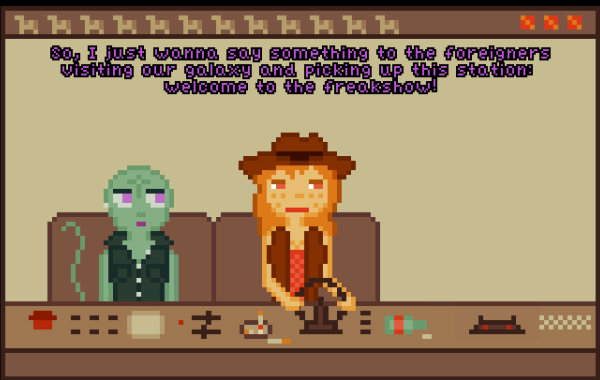 Til Cows Tear Us Apart is about two girlfriends, Enora and Quanee, and their struggles to smuggle a payload of cows across the galaxy to Truxon, where cows are super valuable because the citizens really, really like cows. Ahem. (Hmm, that part’s probably not kid-friend either.)

The spacefaring duo need sneak to past alien customs, battle bounty hunters or try fast talking out of trouble. There are multiple paths with different endings, depending on player choices, or whether you use the FTL drive to warp out of or into trouble. Along the way, the cow counter on the top of the screen keeps track of how many cows have been sold, given as bribes, teleported away, or otherwise disappeared.  In between conflicts, Quanee and Enora will flirt, discuss their heist, and listen to the radio, in a Cowgirl Bebop kind of way.

As I played, I unlocked achievements for reaching different story points, which made even goofy decisions (Should I land on this planet and try the peyote? Should I flirt my way out, or just nuke this guy?) seem more meaningful. Also, players can speed through sections in replays, which encouraged me to replay again and again, for different storylines that did not disappoint. So much blasting, romance, and listening to space music in this little game!

Til Cows Tear Us Apart was created by Pierre Corbinais for the Space Cowboy Game Jam. Even if you’re going to play the browser version on Kongregate, it’s worth checking out the game jam’s page to see how Til Cows Tear Us Apart ranked in essential space cowgirl categories, like Lonesomeness, The Void, and Romance. When I realized this was made in just a couple days, I started to notice that the images of Enora and Quanee at the ship’s console is the majority of the game’s art assets, but that’s ok, because the fun concept, the variety of music and the branching story options make it seem like a much more vivid gameworld.

Til Cows Tear Us Apart blends retro pixel art, choice-based adventures with a Cowboy Bebop / Firefly space bandit universe, which are pretty much all things I like. Probably why it kept coming up on my recommendations.

Crossposted from See Ya, Space Cowgirls: Till Cows Tear Us Apart on Simpson’s Paradox.