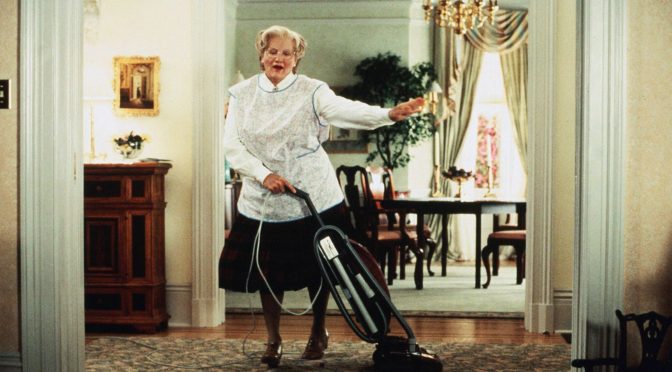 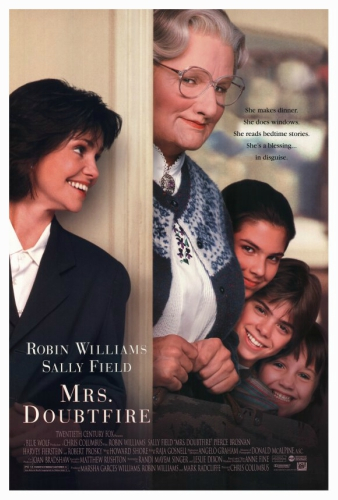 This week for Movie Monday I’ve got a movie that I loved when I was younger. It’s Mrs. Doubtfire!

Plot Synopsis: Daniel Hillard is a freelance voice actor in San Francisco. Though a devoted father to his children Lydia, Chris, and Natalie, his wife Miranda considers him unreliable. One day, Daniel quits his job and returns home to throw a lavish birthday party for Chris despite Miranda’s objections, creating a situation with their neighbors. Miranda files for divorce, and the judge gives sole custody of the children to her, but tells Daniel if he can find a steady job and a suitable residence within three months, he will agree to share joint custody…

Plot: The plot is pretty great, and while it’s a little cheesy by today’s standards it was quite impressive when it first entered theaters. That being said it’s no action flick. So if you want a heart-pounding thriller, you’re going to be disappointed with Mrs. Doubtfire.

Characters: Robin Williams as Daniel is amazing, and the entire cast is quite great. One thing I did forget about this movie was that Pierce Brosnan was in it, although I’ve never had the same memory for movies as I did for other forms of stories.

Cinematography: There aren’t any amazing special effects, but the film is still well done.

Overall: A must watch movie, probably one of the greatest of the last 30 years.

For those who like: Comedy, Excellent Plot, Awesome Cast of Characters, Fantastic Cinematography.