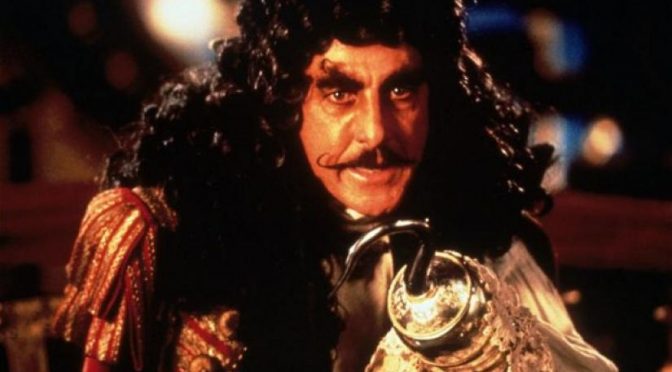 This week for Movie Monday I’m back with a cult classic. It’s Hook!

Plot: The plot is okay, and while Hook has critically received a incredibly low rating it’s still supposedly gained a cult following in the years since. Though whether that’s due to it being terrible or great I couldn’t really say personally as I’m not a huge movie fan as I’ve stated before.

Casting: The casting is good, although the script and directing did lead to actors not really doing their best, which is a pity when you consider that Robin Williams and Dustin Hoffman were the two big stars, with Julia Roberts playing Tinker Bell. The rest of the cast is okay, and if you pay close attention you might even see some other famous faces in some cameos, like Carrie Fisher.

Cinematography: The set pieces weren’t that amazing, and the special effects were merely okay, which considering that Spielberg directed this film is saying something since he usually does a pretty good job.

Music: The music is okay, but again not the best, and amusingly enough Hook lost the Academy Award for Best Original Song to a song from Aladdin, which Williams was a part of.

Overall: This is a decent movie, but it’s not super amazing and the special effects leave a lot to be desired.

For those who like: Fantasy, Peter Pan, Robin Williams.