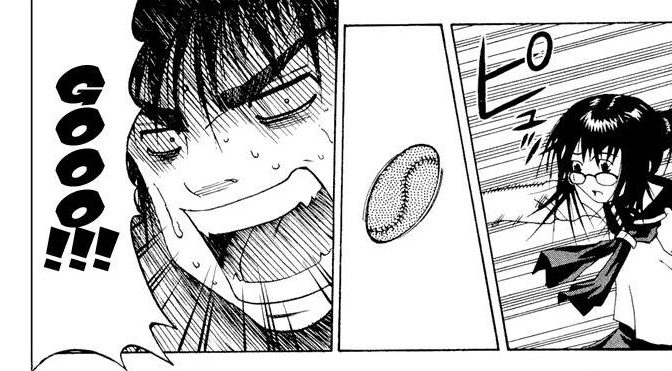 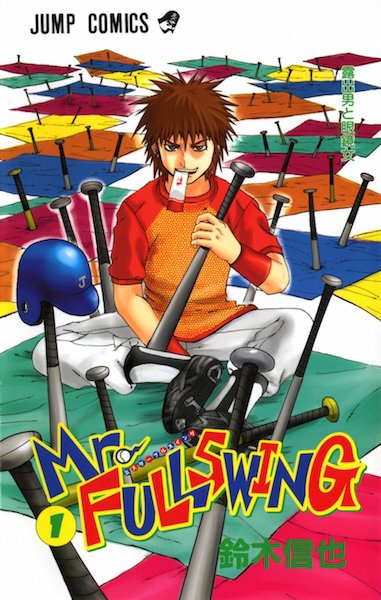 This week for Manga Monday I’ve got another Quick Review. It’s Mr Fullswing by Suzuki Shinya!

Plot Synopsis: Saruno Amakuni is a 15-year-old student of Junishi High School. As a teenage boy, he desperately tries to find a girlfriend. Being fed up with seeing all the girls fall in love with high school athletes, he decides to join a sports-club himself. He starts looking around at the different sports clubs with the guidance of his friend, Sawamatsu Kengo. They go to check out the weight lifting club (of which there is only one member, a large, frighteningly buff guy), only for Saruno to see a girl that he assumes to be the manager of the club and show off for her. After sufficiently hurting himself, he helps the girl, Torii Nagi , carry some weights off somewhere, and while talking to her finds out that she is actually a manager for the baseball club, not the weight lifting club…

Plot: The plot of this first chapter is full of gags, and it gets more than a little bit annoying. Frankly I’m really not interested in continuing to read this series. Maybe it gets better later on in the series, but basing my judgement off this first chapter (which is the whole purpose of my Quick Reviews) I’m not going to count on it.

Characters: Frankly I don’t like Amakuni, he’s a perverted brat who continuously makes a fool of himself. The rest of the cast isn’t that great either, in fact the only semi likable character is Nagi, but she’s pretty shallowly represented in this first chapter so I can’t get a good read on her as a character.

Art: The art is the only good thing about the series, which shouldn’t be a surprise as it’s published by Shueisha.

Overall: Based on this first chapter it’s an easily skippable Sports series.

Not for those who don’t like: Any of the above and/or Mediocrity.