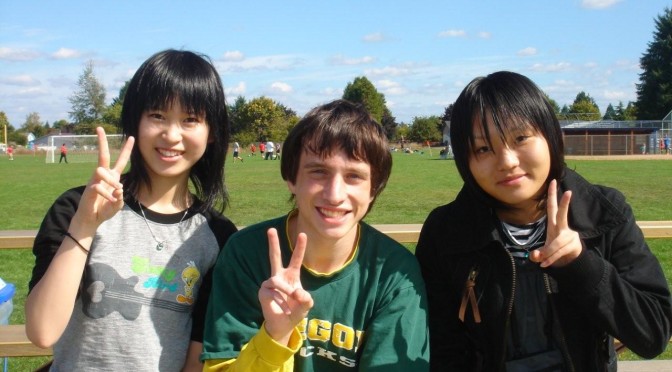 Hello there Game Industry News readers! My name is Michael Blaker, here’s a hint in case you couldn’t tell already I’m the nerdy looking white kid in between the two cute girls of the picture above. I guess some of my blog posts will be showing up on Game Industry from now on, which is kind of cool considering I’ve never taken any journalism classes and hated writing for most of my time in school.

That being said I’m not a professional reviewer, this is just something I do in my free time, and everything in my posts are my personal views on the subject and do not in any way reflect on Game Industry News or their official reviews. Shameless self plug incoming: That out of the way if you want to get in contact with me to do some reviews on your product head over to my blog and read the about author post, a link is always in the top navigation bar. I’m always willing to accept advance copies of games or any other medium and I’ll be honest about my thoughts on it.

I currently live in the Pacific Northwestern paradise of Oregon in the United States, although I have family all over the West Coast and in the New England area.

I’ve studied lots of things from game design to Japanese for a whopping seven years, although I sadly haven’t gotten a degree in anything. I’ve even traveled across the northern half of the United States in a car with no air conditioning in the middle of August, which is pure torture unless you are smart like me and my father and listened to Books on CD while you drove.

I’ve been playing Video Games since I was about 3 when I was traveling on the East Coast with my father and stopped at a relatives to stay the night in D.C. I was introduced to my very first video game, Donkey Kong Country on the Super Nintendo system and I loved playing the first level of the game, although my relatives would take over after that level was over.  After that I got my first Gameboy(an original one, although it was a green colored one) a few years later to keep me company on plane rides to see my father in California whenever I visited him. A few years after the Gameboy, me and my brother got a Nintendo 64 and I’ve been a diehard gamer ever since. When I turned 15 I started playing my first MMO, World of Warcraft and got involved in hardcore raiding at the very end of the Burning Crusade. I stopped playing after the first major content patch of the Cataclysm expansion and while I made a brief return last year, I stopped for good after New Year’s Eve.

My favorite genre of game is probably RPGs, and while I love games like Skyrim, the JRPG is still my favorite genre. The Tales Of game series is probably my all time favorite JRPG, because it fills the need for action gameplay while having amazing stories and plenty of hours of content. That said I’ll play just about anything on a console that I own (of the current gen consoles I own just the Playstation 4 at the moment) or that can play on my Mac Pro that I got when I entered Art college 6 years ago.

The game I’m most looking forward to right now is Destiny, after playing in both the Alpha and the Beta it firmly cemented itself as a game that is going to be great fun. I’m also looking forward to Assassin’s Creed Unity, as I’ve always been a fan of history and the series always satisfies my thirst for that subject very thoroughly.

I’ll read or watch just about any type of fiction, except Twilight, in any format I can get my hands on. My new favorite medium is the Japanese Light Novel, of which I love the Toaru series by Kazuma Kamachi the most. Favorite TV show is One Piece, in the original Japanese because 4Kids Entertainment scarred my enjoyment of localized Anime for all time. Favorite author is Brandon Sanderson with Jim Butcher a very, very close second. I can’t pick a favorite book of all time, because after I stopped counting after 2,000 books around the age of 12.

My favorite type of music is J-pop, because I listen to it while doing something boring like household chores and have another part of the brain doing something fun at the same time. Some of my favorite artists include, but aren’t limited to: Aimer, GARNiDELIA, Ikimonogakari, Kalafina, and YUI. In fact while writing this post half of my brain was enjoying the amazing vocal chords of Aimer, and it’s all okay because it’s in a different language I don’t get confused.

This year in late February as an exercise to keep my writing and English grammar skills sharp I’ve been posting daily content on my personal blog about different story mediums each day. I write about all kinds of different stories from Video Games and Book series to Anime and Manga, though if you want to read a quick review on Twilight you are sadly out of luck. I haven’t missed a single day of content since I’ve started and although I don’t write every day necessarily, I try to make sure I write at least one post a day.

All that being said if you want to stop by my personal blog and read some other posts I have one go up every morning, I’d be more than happy to hear your opinions on some of the stuff I post about.