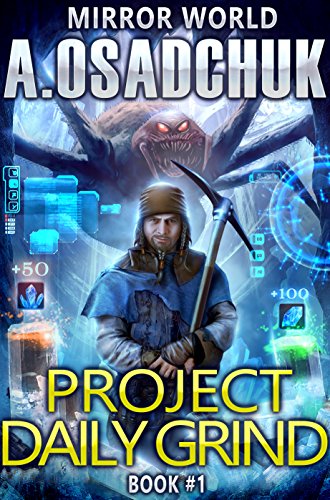 This week for Bookish Wednesday I’m back with another LitRPG series! It’s Project Daily Grind, Book 01 of the Mirror World series, by Alexey Osadchuk!

Plot Synopsis: The ads enthused, “The virtual lands of Mirror World await you! Live out your most secret dreams in our world of Sword and Sorcery! Become a Great Wizard or a Famous Warrior! Build your own castle, tame a dragon, conquer a kingdom! All those desperate, lonely and insecure – Mirror World offers you a chance!” But Oleg isn’t meant to become a great wizard or a famous warrior. He’ll never have a castle of his own. Neither will he ever tame a dragon. And he’s definitely not the type to conquer a kingdom, however virtual it may be. Oleg is doomed to toil away in the recesses of Mirror World’s mines. His goal is to raise enough money for a heart transplant for his dying six-year-old daughter. The clock is ticking. Will he make it?

Plot: This isn’t like other LitRPG series, our main character isn’t a combat capable class at all. He can’t level, he in fact can’t die at all. That isn’t to say he’s invincible though, far from it. I enjoy this take at a topic that is essentially relegated to either jokes or horror in most VRMMO LitRPG books, which is to say the pure grinding aspect of most MMORPGs. It even takes on the part where most grinders use bots to get over the dullness of the process. I personally feel a bit nicer towards those Chinese Gold Sellers spamming my tells tab in MMOs now, but just a bit.

Characters: Oleg, or Olger in game, is our main character and he’s a pretty smart guy, granted that if you are a person who goes around doing translation for businessmen as their job you’re probably pretty smart.The rest of the cast is great too, especially Dimitri a character I didn’t at all expect to like.

Overall: If you’ve ever been spammed by a bot in a game, you need to read this. Just for perspectives sake. It also doesn’t hurt that this is a must read for any LitRPG fan.