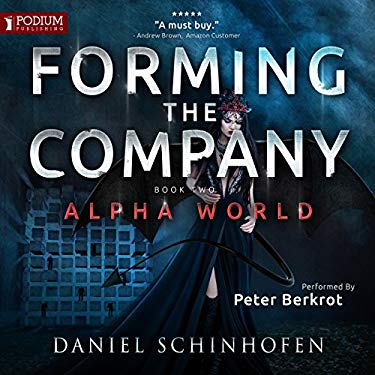 This week for Bookish Wednesday I’m back with the sequel to Gamer for Life. It’s Forming the Company, Alpha World Book 02, by Daniel Schinhofen!

Plot Synopsis: Having been given the option to live the rest of his life in the Virtual Reality game Alpha World in place of his prison sentence, Seamus is now known as the Summoner Alburet. He’s made friends and become close with multiple people, a thing he never thought to have again. However upon summoning his third demon it turns out to be Stacia…..

Plot: This entry in the series is quite good, but it also brought up a ton of questions about Alburet’s past and what really happened to get him into prison. The plot does keep plodding along and honestly was quite a fun entry.

Characters: We get to meet a few more people, including a certain expy of a favorite Archaeologist of mine and most likely many, many others. However my favorite has to be Alburet’s party. They are all great characters, and honestly I like the entire bunch of them.

Overall: A solid sequel and second entry in a series that’s shaping up to be one of the all time LitRPG greats.