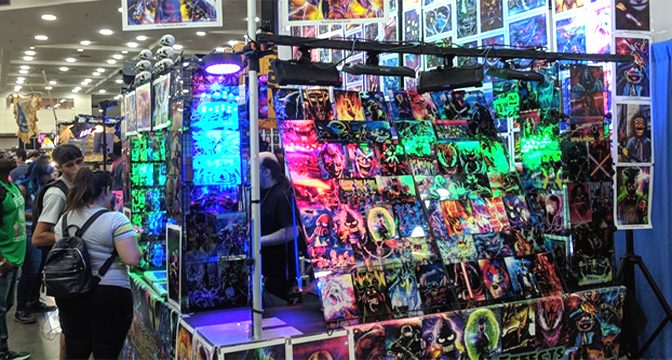 This was my third year attending Baltimore Comic-Con, so while I may not be a veteran yet, I had an idea of what to expect from the con. I went into this year’s Baltimore Comic-Con very excited. When I saw the announced media guests included Wil Wheaton, Mike Colter, and Tricia Helfer, I was thrilled. I am a fan of The Guild, Luke Cage, and Lucifer, along with some of their other works.

My excitement increased when I saw sessions titled “MeToo and Geekdom,” “Creativity and Mental Health – A Roundtable Discussion,” along with a diversity panel, on the schedule.

I was highly appreciative to see the comic community tackling issues that have been in the spotlight of late. The panels and spotlights did not disappoint! I particularly loved Wil Wheaton’s spotlight because it was so easy to tell that he has a close connection with his fans. Zachary Levi’s Spotlight was interesting because instead of following the normal interview and then Q&A format he chose to answer fan questions for the whole time.

The general atmosphere of the convention was as welcoming as always. The comradely and relaxed nature of those attending was very apparent when I walked in and up the large staircase. A favorite moment of mine was when I saw a toddler girl dressed as Rey from Star Wars. She was waving a much too big lightsaber around while her father, dressed as Luke Skywalker was trying to hold her steady for pictures and also make sure she didn’t accidentally wack him in the face. A small crowd gathered to ask to take their picture of the tiny and fierce Rey. The moment was precious and comical and was a good reflection of how this convention is for all ages. I also ran into a mother and daughter duo cosplaying as Rick and Morty. They told me that they made the remote prop using a 3-D printer.

I spoke with a few of the vendors and artists this year, to get a different perspective on the convention. I found them as easy to talk to as the people attending. An author  by the name of M.L.S Weech said this was his second time at Baltimore Comic Con but his sixth convention of the year. When I asked him about it, he said he attended so many conventions to promote his book. He explained “This is the only real place to talk to people in person, people go to conventions to find new things.” From my experience and conversations with other people, that is very true.

I made one purchase at Comic Con, I bought a Firefly bumper sticker that says, “Stay shiny.” When I purchased it I stopped and chatted with the owner of the vendor. I asked Felix how long it takes him to prepare for a convention and he told me that he doesn’t stop. He has a team of working people making the stickers, and he attends 45 shows a year. He quit his full-time job seven years ago and went into this all the way. Just like how avid convention goers run in the same circles so do vendors. Felix said that he knew most if not all of the other vendors at the show and a few of the artists.

My favorite conversation was with Derrick Johnson, a comic book writer and artist, with work published by Colored Comics. He spoke about the move to new formats for comics and that his work is featured on a phone app called Comixology. This was his first time attending BCC as an artist. He’s attended the convention a number of times. He summed up why Baltimore Comic Con is a special convention. “It is very much a real comic show. A lot of shows have evolved to be a catch-all for nerd culture, but BCC has been really good about keeping comics at the heart of it.”

When I said goodbye to the convention center on Sunday and headed out to my parking garage, I came across two people handing out copies of a hardcover book for free. I am always surprised by what I learn and take away from the Baltimore Comic Con.