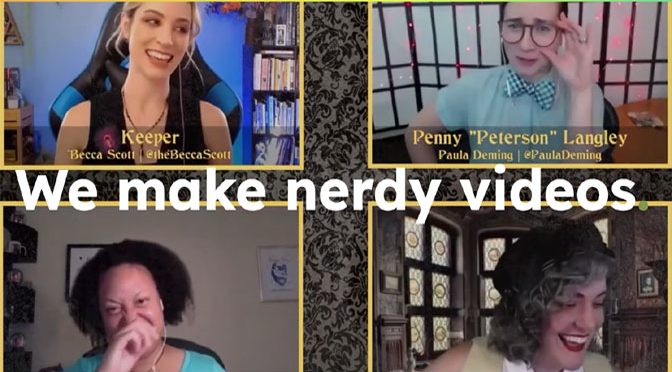 The Good Time Society is a gift to Table-Top Roleplaying Games (TTRPG). This group of YouTube Content makers, Twitch streamers, actors and a mash of the above, hyphened together, produce high quality actual play broadcasts. While many of us wish movies or TV Shows would take risks on settings, characters or casting, this group does it regularly. It does this through its How to Game tutorials, Gameplay’d Playthrough Videos, and Reviews.

The Good Time Society was co-founded by actor Becca Scott and director Jake Michels. Scott was an actress who came out to Los Angeles and joined the launching pad for many TTRPG Actual Plays, Geek & Sundry. The place that gave birth to the Dungeon and Dragons (D&D) sensation Critical Role and Vampire: The Masquerade -L.A. by Night (VtM).

While on Geek & Sundry she was the host for the Table-Top Instructional Series: How to Play and its sister series that did playthroughs, Game the Game. She was on many of the channel’s Actual Plays. She has carried this over into The Good Time Society with shows that highlight certain games.

Michels is a producer, director and writer who also worked on some of Geek & Sundry’s most popular offerings. Show like Game the Game, How to Play, the Deborah Ann Wohl (True Blood, Daredevil, The Punisher) D&D Actual Play “Relics and Rarities” and numerous shorts on the network is how he honed his craft. He is also in front of the camera on the Good Time Society for shows like, Victory Points or various play-throughs.

If you want to see one of its best one-shots than watch its take on the Call of Cthulhu classic scenario “The Auction.”

It features Scott as the Keeper (Game Master) with such great on-line content creators like: Erika Ishii, Xander Jeanneret, B Dave Walters and Josephine McAdam.

The costuming, lighting and camera angles are way above normal streaming. The players project high energy, and throw ping-pong quips at each other with practiced ease. They have worked together before and it shows in the trust they have to play characters vying for arcane artifacts across a high-stakes auction. Becca, as Keeper, both sets the scene and navigates the rules so well it feels like improv theater. She doesn’t get in the way as the players scheme, scream and fight for survival.

This channel is also good for those who just want to learn different games like Call of Cthulhu. The short introductory videos on these subjects are great for sending to those friends to explain. They are short, high energy and informative enough to teach without being exhaustive in their detail.

The Good Times Society gets its boost by not just its many game sponsors but by its many collaborators. Some of who are: Critical Role DM Abria Iyenger, Eric Campbell (Geek & Sundry), Jasmine Bhullar (SHIKAR, Relics & Rarities, Acquisitions Inc.) and Roll20’s Carlos Luna. The full list is on their website and shows the varied and talented people who have worked with them.

One of the playlists on their YouTube Channel is called The Calyx and it has many small scenarios that are spread out over a few session. It has a changing roster of Keepers and Investigators that all bring something different to the games. The first one I saw called “Embrujada” grew out of Aliza Pearl’s stories her family told her about 1940’s Puerto Rico.

So, if you are looking for some good Actual Play TTRPGs go to The Good Time Society. It will no doubt have something in its large catalogue to entertain you!