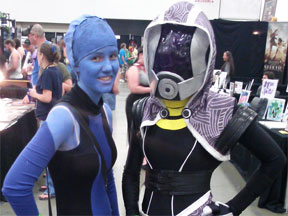 Before I made the six hour drive to Louisville, Kentucky to cover Fandomfest 2013, I reflected on the last convention I covered. It was a great gathering of gamers and comic book fans, but was in a smaller part of Ohio. Fandomfest was supposed to be gigantic. The city predicted forty thousand attendees.

Sure enough, there was no disappointment in terms of numbers. At one point the fire marshal had to shut the place down to new visitors because over 70,000 people decided to attend. Given that the city only expected 40,000 to show up, this was quite a surprise for everyone involved. Eventually those lucky enough to be inside got tired and left, making room for those stuck outdoors, though I would guess that the hours of delay probably lead to a few angry fans, though nobody I saw seemed to be too upset about it.

The convention was spread out between a large hotel and a convention center. Both areas offered a unique experience with many different things to see. I was mostly situated in the convention center where a lot of the famous people, authors, artists and vendors were. William Shatner and Stan Lee were among the tremendous roster in attendance. I actually got to talk with and shake the hand of Eddie McClintock from Warehouse 13. And yes, he was very cool and quite nice to everyone he met. In a way, he was surprisingly like his character from the show, only a lot smarter.

In the exhibition hall were a plethora of authors. Hydra publishing, Post Mortem Press and Seven Star Press were in attendance with their full range of writers and comic book creators to name just a few. Also Fandomfest held author panels where writers talked about certain subjects and answered audience questions. I was on three myself since my own book, Love, Fear and Holy War, is about to be published. I’ve never had so much fun answering questions, though that is probably because of the sometimes quirky subject matter. One panel I helped to moderate was about how authors should drink a lot of alcohol to help them manage the pressures we are constituently under. I was happy to demonstrate how that worked for the appreciative audience, though I don’t remember much after that one.

Over in the hotel side of the convention were many other fun exhibits like a horror room. Vendors and celebrities were hidden in this great area, which was kind of like a mini-convention in itself. The man who used to play Eddie Munster was there as well as a plethora of small horror movie companies. I ended up with an autographed piece of art from Steven Bejma while down there.

Then after wandering through this labyrinth of an event, I stumbled upon a video game fighting tournament. Unfortunately I was pressed for time and couldn’t attend, not to mention it looked like one I wasn’t even remotely good at so I moved on. I stumbled upon Vampire the Masquerade, Dungeons and dragons as well as a steampunk ball. The number of events were seemingly endless. I’m not sure how the convention organizers got so many groups to come together like they did. Where other conventions seem to struggle to even make a tiny ripple, the folks at Fandomfest had something like twenty really organized sub-events going off without a hitch, complete with their own stars and notable people. I’m sure that many people came just for those sub-areas that interested them, and probably weren’t disappointed.

Of course there is the cosplay, and that tends to define a convention too. This was by far some of the best cosplay I seen and I had a lot of fun meeting people in costumes from my favorite video games, comic books, TV shows and movies. I have a photo gallery to go with this review, and it shows some of the creativity. Also, every convention has a Stormtrooper, I think it’s a law, and I tracked one down and got a picture with him.

All in all this convention was busy, but it offered a lot of content assuming you weren’t locked out for too long. I would highly recommend it for anyone who likes, well, almost anything. But do yourself a favor and know what you need to see and where it’s at within the grounds. If you want to play a Brujah all weekend with the Vampire crowd, that’s cool. If you want to talk with horror film directors, that will work too. Comic books or cosplay or video game tournaments, it’s all there. But come with some type of a plan, because there is lots to see and do, and never enough time at a Fandomfest. I’m looking forward to next year, and I bet a lot of other people are too. They may have to find an even bigger venue to hold everything!