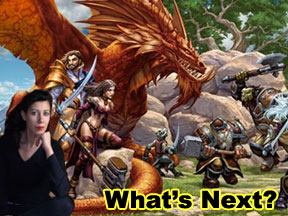 (and what we want)

Today, the MMO community finally gets some details on EverQuest Next, when the game makes its debut at SOE Live. Yes, that is the official name of the game. A bit of an odd one and it doesn’t give fans much to go on either. Rumors are in overdrive. I take a look at what we currently know about EQN and also ask some of the questions that need answering.

It’s All About the Sandbox

World of Warcraft (WoW) is the king of theme park gameplay in the MMO world. This is a model where gamers are given a string of content to play with. Developers feed them quests and elements that guide them through the world, taking them through the story and entertaining them along the way.

Sandbox gaming may be old news for offline gamers, but it’s the buzzword for MMOs and many see it as the future. EVE Online is the most successful sandbox MMO. In this type of game, players are given a world and a framework, but content is player created. The job for developers is to provide enough tools for players to create their own entertainment. Elements such as crafting and merchants, in-game economies, as well as features such as factions are necessary to make the sandbox vibrant and ever-changing, rather than empty, boring, and for newbies, confusing.

EverQuest Next has set itself apart from WoW by taking the sandbox route, but fans are going to be wondering how it’ll work and whether it’ll feel EQ enough.

A Return to the Old

SOE is definitely looking back at what they did right with EQ and EQ2. The return of Emily "Domino" Taylor as producer has made fans very happy. Taylor is largely seen as the driving force behind expanding the crafting system in EQ2. Her return could be a sign that crafting is going to play a large part in the sandbox design. With her at the helm, EverQuesters may be able to rest easy that rather than reinventing the wheel to deliver a watered down MMO experience. SOE aims to create a deeper game.

EverQuest Next details are the best kept secret in the games industry. I don’t know how SOE has managed it, but we really don’t know anything. However, recently, SOE unveiled some concept art to get fans salivating. Gobor Sziksai was hired to reinterpret the original EverQuest art by Keith Parkinson. Unfortunately, it leans towards the Korean styling favored by WoW. That means enormous weapons and oversized armor, especially shoulder pads, with baroque detailing. Elves are cursed with big ears and the women get huge knockers and minute armor. It’s all boobs and big swords, whereas the original by Parkinson had an understated quality, even if it is a bit old fashioned now.

Of course, we can read too much into a bit of concept art, but fans have been vocal about the WoW styling. Also noticeable, is that the only black character from the original has miraculously turned into a white guy. Whitewashing is never a good thing, but there we go.

So that’s what we know about EverQuest Next. Here are some of the things I’m hoping we’ll know after the SOE Live announcement, which starts at 12PM Pacific Standard Time, where the event is taking place. You can tune in to Sony’s Website at: www.everquestnext.com to see what’s happening.

How Will the Sandbox Work?

The success of a sandbox lives and dies on the tools the devs give players. SOE has said EQN will be the largest sandbox MMO ever, but what does that mean? Will there be non-instanced housing, allowing players to build houses on spare bits of land and create settlements, or even cities? Will EQN become a spreadsheet MMO, focusing on economics and politics, much like EVE? And will the story fit into all of this? Will players be able to create dungeons or even stories of their own for other players to complete?

Will EverQuest Next Offer Action-based Combat?

There’s been a trend towards more action-RPG elements in MMOs. Is EQN going to follow this path and offer players the chance to block attacks and aim at foes, rather than just tapping the ‘hit’ key? If it does go the action route, it’ll have to be very well done, otherwise it’ll just be a pig to play and could upset the old guard.

Is EQN coming to PS4?

There have been rumors that EQN is hitting the next gen console. If it’s true, players should expect more of an action element in the new MMO to keep console gamers happy. Whether this is a good or a bad thing is up for discussion. I can see the benefits of both.

What about Classes and Progression?

Taking the concept art literally, there are some questions regarding classes and races. Why does Firiona have a bow? And why do all characters have weapons, with no non-combat magic users? Tomorrow, we want to find out what classes are available and what the levelling system will be like. Is it going to go down the Elder Scrolls route and level up skills through use, rather than grinding through quests? And maybe there will be less focus on classes, allowing players to choose skills as they go, building their own character as they play. This will be good news for role-players, but how will PvP fit into all this?

So many questions, but thankfully only a few more hours to wait for the answers.