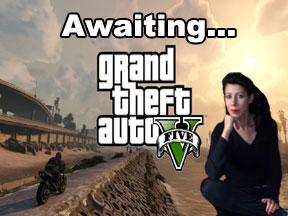 The first few seconds of the GTA V trailer shows a plane gliding over a reservoir, water glistening in the sunset, with a seemingly endless landscape of desert and rolling hills going into the distance. Don’t forget, this is an in-game trailer, so that is the actual city. No convenient swathe of mist on the horizon to disguise draw distances, just a thumb-smudge of smog on to indicate a thriving city below.

As the trailer takes us on a tour of Los Santos, we see mountains, forests, lakes and beaches. On top of that, the city itself sprawls with different neighborhoods and districts. Apparently, all areas are open from the start of the game, leaving players free to explore everywhere, from the gangland areas, to the mock-Hollywood district, through to the financial area, full of suits and glistening skyscrapers. This is way beyond San Andreas, my last foray into the GTA series.

Okay, so we already knew that the game features three characters, but this trailer gives us a bit more about their character.

Michael is the ex-bank robber with teenage kids and problems at home. Think Tony Soprano.

Franklin is a street hustler. As the black character, I thought this was a bit cliche. It might have been more interesting to make Michael, the family man, black. But I’m willing to hold judgment on this one until I’ve played the game.

Trevor is…a psycho, is the best way to describe him. We see him trying to flush a severed foot down a toilet. Nuff said.

As the player, you can jump between characters, who have different strengths and weaknesses. You can choose a character depending on how you like to approach a quest, whether that’s stealth, guns blazing or sharp-shooting.

In just a four minute trailer, the depth of customization was pretty astonishing. It’s a return to the feel of San Andreas, with the ability to go shopping for clothes and tattoos or whatever floats your boat. You can also customize your car, almost to the degree of an actual driving game. This is no simple pre-designed paint job. You can choose rims, colors and other details to pimp your ride.

More distractions than ever

GTA V is like Skyrim goes urban. There is just so much to do to distract you from the main storyline. How about a full blown golf game or maybe tennis? You can embark on road cycling races up into the mountains and then base jump off the summit. And if none of that takes your fancy, how about some hunting or SCUBA diving. Yes, you can actually go diving and discover wrecks and things under the water. Now that’s just cool.

You’ve also got more things to spend your money on, including stocks and shares and property. I for one am going to become a property mogul. Something tells me, this game is going to be a life eater.

It’s all about the heist

Everyone loves a heist movie and now GTA V is letting us play in one. The missions seem to be a series of heists, which I’m guessing become more and more audacious as the game goes on. The player’s job is to assemble a crack team of rogues, I mean experts, to help you perform the job. This is going to give plenty of scope for a cast of interesting characters. And if there’s one thing we know about Rockstar games, it’s that they can deliver a cracking script.

Rockstar have failed, yet again, to step up to the plate when it comes to casting women in key roles. The trailer featured two women. One was Michael’s teenage daughter and one was a picture of a possible NPC accomplice. On the plus side, there weren’t any hookers in the trailer, so that’s good right? With three lead characters, you would think Rockstar may break the GTA mould and cast one of them as a woman. Alas and alack, it wasn’t to be. Maybe next time Rockstar.

Although it was only teased at in the last trailer, GTA V will apparently have a robust multiplayer element. We saw the world from high above for just a few seconds, looking out a skyscraper window, and down below there were at least twenty people driving, shooting and performing mayhem. Then a jet flies by, piloted by yet another real person. Whether GTA V multiplayer is just going to be a giant open-world shooter or if they put something more behind it is unknown, but they promised to tell us more about that next time. Given how ground breaking the rest of the world looks, it’s probably a good bet that multiplayer is going to be something special too.

After seeing the GTA V trailer, Kojima, creator of the Metal Gear series hit twitter to give his impressions. He told followers, "GTA V new trailer was awesome! This free control is future of the game, way higher than anywhere, makes me depress as matter fact." And then went on to say, "I don’t think our "V" can reach that level. Rockstar’s team are the best. W/o question they will pull up the possibility of game."

So there you have it. From the man many consider an auteur, GTA V is the one to beat. You don’t get much better praise than that. Rockstar must be jumping for joy.

If you’re not looking forward to GTA V yet, you need to check your pulse. Clear the diary this September. It’s going to be big.