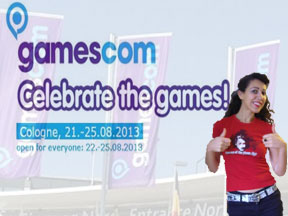 It’s August, which means the games industry is preparing to head to Cologne, in Germany for Gamescom 2013. This is Europe’s answer to E3 Expo and has become a firm fixture on the gaming calendar, attracting over 200,000 visitors last year. At E3, Sony came out the clear victor, winning the hearts and minds of gamers and critics alike. Microsoft will be keen to win back some ground this time around and has confirmed a pre-show conference. Many of the big names are at the show, which promises to be all about games and letting punters get some early access to upcoming titles.

Here are the expected highlights so far:

Ubisoft is showing an enviable list of big-hitting titles, despite not hosting a conference, instead choosing to focus on the show floor. Titles at Gamescom include Splinter Cell: Blacklist, The Crew and The Mighty Quest for Epic Loot, alongside the AAA titles, Assassin’s Creed and Watch Dogs.

My personal highlights will be: Assassin’s Creed: Black Flag ‘ I just can’t get enough of this at the moment. Everything I see looks amazing. Give me more please.

Watch Dogs: this is another sweet looking title and I expect Ubisoft will be using this and Black Flag to show of the next gen.

Beyond Good and Evil 2 ‘ could this be the year we get confirmation of a title in development? Let’s hope so.

Plus ‘ Ubisoft has also announced a new IP for next gen to be revealed at Gamescom. There’s no telling what this could be, as Ubisoft proved with the Watch Dogs reveal at E3 2012, that the best publisher when it comes to keeping a secret. Could the mystery title be Child of Light or something else? All we know about Child of Light so far is that it’s a small team with a small budget. The title will be showcased at the Games Developers Conference (GDC) Europe, which takes place in Cologne just before GamesCom.

Watch this space, as Ubisoft could steal the show.

The Elder Scrolls Online (TESO) will be playable at Gamescom giving us a chance to see what it’s all about. Sony Online Entertainment (SOE) really threw the gauntlet down with its EverQuest Next (EQN) reveal at the beginning of August. It’ll be interesting to see how TESO is shaping up in comparison to EQN.
EQN looks set to shake up the MMO landscape, with player-created content, multi-classing and a fully destructible world. Let’s just say, TESO has some serious competition on its hands.

Sony’s announced a press conference at the show, confirming that PS4 will be the focus. Will Sony announce some more exclusives or did they reveal too much at E3? Post-E3 reports suggest that Sony has more to reveal, so this should be an interesting one.

My most anticipated: Beyond: Two Souls – we still haven’t seen much on this paranormal action game. I’m betting GamesCom will give us more on this title, especially as it comes from the French, Quantic Dreams studio and France is the partner country for the show this year.

Rain – I’m keen to get more on this atmospheric, Ico-esque title.

The Order 1866 – this game wowed me at E3, but we only got a glimpse. I’d like to see more gameplay and just more.

Microsoft has a lot to do at Gamescom, but the good news is, it can’t be much worse than their E3 effort. This year’s press conference takes place on 20 August, the day before the expo opens to the public. I’m expecting a real focus on games, as well as details on the self-publishing capabilities of Xbox One, making this a crowd pleaser for indie developers. Rumor has it Microsoft will reveal a previously unannounced exclusive ‘ so it’s all to play for. My most anticipated: Microsoft really failed to excite me at E3, so I’m keen to see the exclusives and some of the indie titles coming to XBL. I’m ready to be wowed.

With GTA V hitting retailers on September 17th, the Rockstar booth will be mobbed with people keen to get a hands on. Nothing yet on whether it will be available to play, but it makes sense.

My most anticipated: I’d really like to hear news of the next Red Dead. I don’t think we will, but it would be nice.

The best kind of show is the one that dishes up lots of surprises. With the next gen consoles around the corner, anything could happen at Gamescom this year. EA has press conference, showing Titanfall and Nintendo is also hitting the show floor, along with Konami, Bethesda and Let’s hope Microsoft manages to level the playing field, setting things up for a good, old fashioned console war. Either way, it’s all eyes on Cologne for the next couple of weeks.