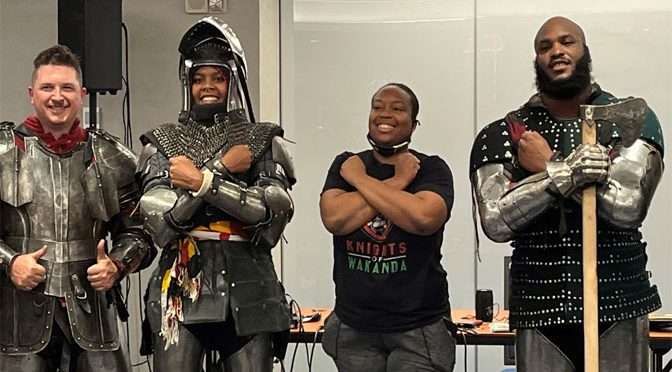 Editor’s Note: Check out more of our BLERDCON 2022 coverage!

It was a challenge for me as a black kid in my twenties in the alternative rock and punk scene. Dancing in the clubs and thrashing around in the mosh pit in my spiked hair, doc martins, stud belts and wrists in my favorite band t-shirts, I was too black to be white, too white to be black.

I was Afropunk before there was such a movement.

It has been refreshing for me to witness the thousands who descended upon BLERDCON 2022 this weekend, comfortably cosplaying in a safe space designed for their diverse identities of color, culture, gender, and sexual identities.

“I haven’t seen too many anime conventions directly tailored to the black community. I’ve seen videos, and it showed the black community as well as the things that make black people unique even in the community,” said Baltimore native Tyler Bacon. “We have hip hop, trap music combined with all of the video games. It’s just a unique feeling to have both of those things come together, and I was really excited knowing that it is in the DMV area. “

I relish in the day that there are more characters and storylines that range from Morpheus to Black Panther, Luke Cage and Black Lightning, Storm and Solarius. Similar in the music scene, there needs to be more black rock and roll bands than Living Colour, Fishbone, 24-7 Spyz, Lenny Kravitz, and TV on the Radio.

Swarms of attendees adorned in science fiction, fantasy, and superhero familiars along with their own original imaginative costumes posed for pictures, sang, danced, played video games and Dungeons and Dragons, participated in panel discussions, and supported independent vendors selling their wares.

BLERDCON weathered the pandemic storm, and this year was bigger than before, boasting between 5,000 and 8,000, who declared that it is past time for such industries to ramp up their inclusivity and equity. This includes more writers, directors, actors, producers producing content and enjoying widespread distribution.

Like in every sociocultural group, these cosplayers have been involved in the genre since they were tots. “My cousins would watch Dragon Ball Z, Sailor Moon, you know the classics, and I thought it was so interesting, just the animation. So, I turned to video games for comfort and keeping my sanity, and that always stuck with me,” said Bacon.

What was clear this year is that there is a thriving and growing scene, and judging from the robust conversations in various panel discussions, there is more demand than ever, with the younger generations committing to picking up the mantel and moving it forward.