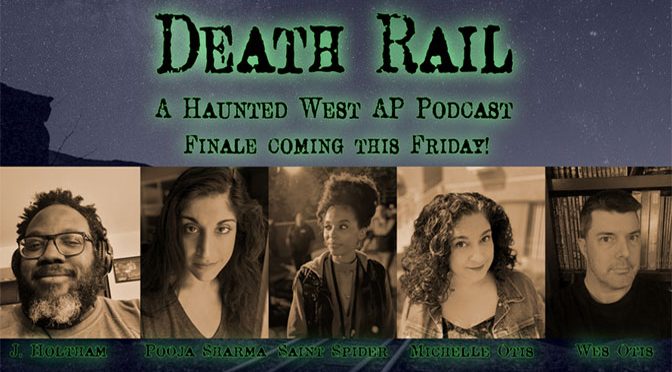 The Table Top Roleplaying Game (TTRPG) Haunted West has now appeared on two Actual Play broadcasts since its official release. We covered this innovative game release in a previous article.

The first broadcast was on January 21, 2022 with Battle Bard composer Wes Otis (SpongeBob SquarePants, Hellboy Animated) acting as the balladeer (Game Master). This ensured it was well scored (lots of sound effects, and a little music) and well edited. For a listener it means the lag time between dice rolls and results is shortened and the rules are given quick explanations and little wrangling between players and GM.

Two of these players, J. Holtham and Pooja Sharma are also on the long running TTRPG show Happy Jacks. It should be noted that Happy Jacks has been around since 2009 and many of those players who have been on the show are known throughout TTRPGs got their start on that show. 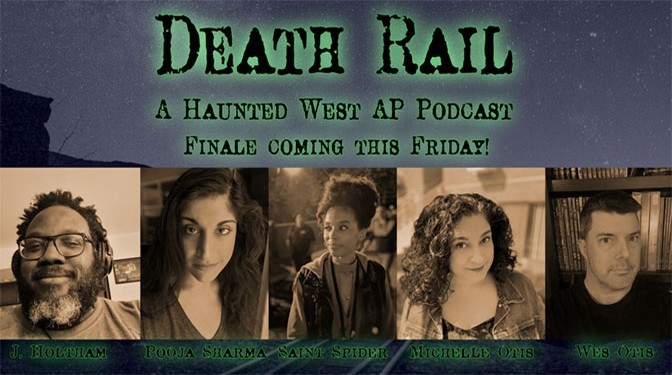 They jumped right into the game and gave a great narrative opening to the setting. A wild and weird west where the post-Civil War Reconstruction was given lots of assistance and opened up opportunities for peoples ignored by regular recorded history. This plays right into the adventure, a railroad heist and not your typical western stick-up for cash. This is a train filled with gold and weapons for General Custer, heading up from Mexico.

The characters are Cooper a Gadgeteer, Chetna a Gunslinger, Marisol a Cowpoke (a Drover) and Mary O’Shannessy a Grifter. These player choices highlight four of the twelve different Paragons you can play. The railroad heist and is in two episodes, both under an hour.

If you want a quick experience on both the setting and the gameplay then this is for you. It won’t give you a tutorial on character creation but it does give you the experience of the game. It will tell you if it is something you want to buy.

The next playthrough was on February 15, 2022. on Roll20App Channel on Twitch then did a playthrough on February 15, 2022. As of the writing of this article has had 458,300 views. It was live and went through the lifepath character creation. It is also on the Darker Hues YouTube Channel. If you want to actually see people learning and making decisions on how to make a character then this is a good one for you to watch. It is a commitment though, since it clocks in at two hours and eleven minutes.

The GM/Balladeer is TrooperSJP. This streamer runs many games, his most prolific being set in Paris, during World War II. He is known for trying new games and tweaking existing game systems to create his own unique campaigns.

His players were Danny, Honey, Brandy, and Quinn.

TrooperSJP also used his stream to highlight a “Session O” and the use of safety tool so that the players will feel comfortable about what elements could be in their game. He utilized a set of questions and a spreadsheet that is available on Roll20 called “Lines and Veils.” 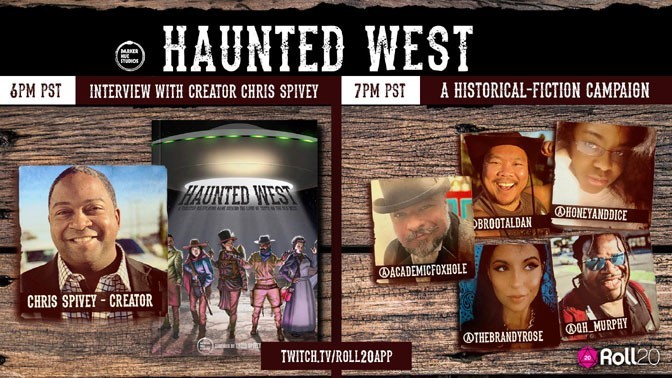 The concept of “Lines and Veils” is an analogy that there are certain lines you won’t cross during play and that some scenes would be veiled so as to lessen the impact. If you ever wanted to see how such a process can play out, this is it.

This was not an edited stream and it pauses the action as players think over decisions, the GM checks a rule or an internet connection gets weak, just like in any on-line game. If you want to see the gears of the game during character creation this is the stream to see. It showed that during character creation you can roll randomly to get a characteristic, but you can make a decision to switch the result. It won’t unbalance the character, just put it down a lifepath different than the random one the dice roll derived.

There will no doubt be more of these Actual Play games of Haunted West in the future but these two will give you different views of the game so you can decide if you want to try it and, and if you do, have a better understanding of the game than just reading the book alone.