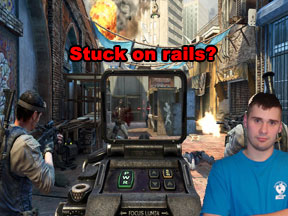 Today, first person shooters such as Call of Duty and Battlefield dominate both the market and award shows alike. Both of those series have rabid fan bases who pre-order every new installment without a second’s pause. Call of Duty by itself has more awards than most Bethesda titles, and the stack is only getting larger. Black Ops 2 even won for GiN Game of the Year, and of course, for top shooter. That’s all well and good, but something kind of struck me as odd when it comes to not only Call of Duty, but the genre as a whole.

Of course it’s always best to start from genesis, the beginning. In this case I was at local game store called Game Scape where I was picking up a copy of Singularity, a first person shooter. I started talking with the guy at the counter, just passing time as most of us do in our local game stores, when we got on the topic of the Call of Duty franchise.

The guy said, "Call of Duty is nothing more than a glorified rail shooter."

I thought about this, and decided that he was right. If you think about it, that is all the genre itself is about. It’s an amazing special-effects laden rail shooter, but a shooter on rails nonetheless. For those who don’t understand what I mean by a rail shooter, think of Star Fox 64. In Star Fox you can only go forward. Now think of campaign mode for every first person shooter not named Far Cry. Of course there might be a odd ball here or there, but for the most part, all of the campaigns are on rails. You can only go forward and never take a detour. Even if you are allowed to backtrack a little bit, you are still basically confined to small areas, like a shooting gallery. Even the much-praised BioShock Infinite is basically a series of rail shooting levels strung together in a beautiful package.

I understand that getting off the rail requires a lot more work, yet the FarCry series had no problem doing it, and doing it well. So if FarCry is blazing a path, why is no one following? Honestly I think it’s just laziness on the part of Call of Duty, Battlefield and games like that. If they know people will buy any game they crank out, then why put in extra effort.

Even people who don’t like rail shooters love CoD and the like. Why? Because everyone says they just buy the games because of the multiplayer. For verification, I asked a bunch of people buying CoD in that store if they really dropped sixty dollars just to have access to the multiplayer. More than half of them agreed that they had.

I spoke with a local gamer named Dakota Thomas and I asked him what his thoughts were on the state of the first person shooter genre. He told me, that in his mind, if the genre keeps going the way it is, he thought it would fade away. It’s not impossible. Remember when other genres held sway in the industry? There was a time when simulations were the biggest thing on the planet.

I hate to sound like I’m calling out Call of Duty on this, but every game seems to be a shined up version of the last game. It strikes me that this is why the genre will never grow. Unfortunately even games I love, like the F.E.A.R. series, suffer from the same concept.

As gamers, we have to snap out of just accepting it when game companies give us rail shooters and think its awesome. Normally GiN’s own Todd Hargosh and I see completely differently on many issues, which our podcasts in the GiN Lounge show in abundance, but I’m agreeing with him on something now. We as gamers have to learn to say no. When they started making people buy season passes we should have said no. This same thing applies to the games themselves. Game companies answer to the players, and if the players make what they want clear, then the companies will have to listen. Ultimately, the companies want to make games we will enjoy, and ones that will make them money. You can’t really blame them for the same old thing if we don’t demand change.

I’ll be honest, I loved the old World War II Call of Duty games. Even when the first Modern Warfare game came out, I was excited and had fun with it. But now every shooter, not just CoD, looks exactly the same, and the genre is suffering for it. I can only hope that companies decide to follow the FarCry model and drop the rail. As gamers, we deserve a game that has had time and effort placed into it, trying to make it innovative. I know this article is going to ruffle a few feathers and I’m sorry. Nevertheless, I think the genre needs an overhaul. If you think I’m wrong, by all means feel free to post in the comments section below or email me at neal@gameindustry.com as I’d love to know what you all think.