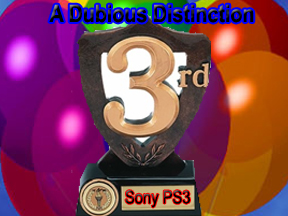 Sony, I have to ask, "What were you thinking?"

So another E3 has come and gone, and by almost all accounts, it was a good show. Not just in terms of the show, but for the companies that participated. Like with most years, the biggest news was generated by Microsoft, Sony and Nintendo. And after seeing all three press conferences and reading every scrap of material the three companies produced, I can make two predictions. Microsoft will challenge Nintendo for the top spot in new console sales, which was pretty obvious with the revealing of their new Natal controller-less technology. But the real surprise for me was what didn't happen at the show. And it's the reason why I think Sony will not only lose more ground, but may fall out of the market all together.

You see, despite the numbers they tried to throw around at their press conference (and isn't it telling that the other companies didn't need to resort to that) Sony came into E3 in a huge position of weakness. There are far more Xbox 360s out there than PS3s, and the Wii console is number one in new sales. That puts Sony third by any account.

But it's worse than that. The most recent sales figures show that the PS2 outsold the PS3. That means that their brand new console is lagging behind their old system. Kudos to them for building a system like the PS2 that still has new games coming out for it that are fun to play, and can be snapped up cheaply, though it's not exactly a great way to push people into the new console realm.

So at E3, I was expecting Sony to try to do something to rectify the situation. You see, I'm exactly the target market that Sony needs to capture. Despite being very technically savvy and loving video games, I don't own any of the three major new consoles. That means that I'm part of the potential install base for every company. And with The Beatles game coming out, the pressure is on from my wife to upgrade so she can play it. It's coming out on every console, so any of them would work for that.

I had already ruled out the Wii as a potential contender for my money. It's a fine system and looks like a lot of fun. At the senior center near where my wife works, the elderly people line up to play Wii bowling, and look to be having a great time with it. But I'm more of a hardcore gamer, and whereas the bowling and sports titles might offer a momentary diversion, I don't think they would hold my interest very long.

So that leaves the 360 and the PS3. Since I do own a PS2 and am very happy with it, my inclination was to go with the PS3. A lot of my friends have had manufacturing errors with their 360s, requiring that they ship them out and wait for repairs. So the PS3 looked like a better system.

The problem? Like some politicians are fond of saying, "It's the economy, stupid."

The PS3 costs too much. Sony has stubbornly refused to drop the price down to reasonable levels, or even to mach the 360 price. I can't see why they wouldn't do this. If a consumer like me is looking at upgrading to a new console, and one costs $100 more than the other, that is a huge hurdle, especially now with everyone tightening their belts.

So naturally, I thought at E3 that Sony would reduce the price of the PS3. Then with all else being more or less equal, they could capture a larger share of the market from those people who own PS2s, had good experiences with them, and want to stick with the Sony platform. And if they could make their unit cost less than the 360, well, the battle would be over.

But instead they spent the entire time at their conference talking about a new PSP. Excuse me, but how is coming out with a new version of the PSP going to increase sales of the PS3? One is a handheld gaming platform. The other sits in your living room or den. When I used to ride the train to work I would look on enviously at the few people who were playing with PSPs. They looked like a lot of fun, even though the game selection was a little limited. But there were a few RPGs I would have loved to try.

Even so, I always saw that as a separate thing. I mean just because someone owns a DS doesn't mean they are going to pick up a Wii because they are both from Nintendo. It's two separate areas. Handhelds are used on a bus or a train, while consoles are played in the living room with all your friends gathered around, either in person or virtually. I realize that Sony is trying to say that the new PSP is tied into the PS3 because you can download games on your PS3 using the network and then put them on your PSP. But so what? I would like a PS3 regardless of any extra handhelds or features.

Now, counter that with Microsoft, which made no bones about having The Beatles game on their console (and did it so skillfully and with so much star power that it almost seemed like it was an exclusive title) and also introduced the Natal technology that is far better than anything the Wii can offer in the field of motion capture. Plus, you are supposed to be able to make Natal work on any existing 360. So they played to their existing install base, while trying to lure new buyers in at the same time. In marketing terms, we call that brilliant.

The bottom line for me is that I've changed my mind about getting a PS3. To me, it seems like the 360 is a much more advanced console now, with plenty of cool games like The Beatles one that I want to play. And it costs less than the PS3. This is exactly the opposite of what I thought would happen.

Sony may still be considering a price drop, but they likely want to rack up as many full price sales (from people who will feel really cheated afterward) as possible before that happens. So they end up being like the dog in the fable with a bone in his mouth that sees his own reflection in a lake, and tries to grab the phantom bone down in the water. The dog loses both bones and ends up with exactly the same thing Sony is getting from me – nothing.

If the market follows suit, which I suspect it will given the state of things, we may be witnessing one of the greatest falls in the console market: Sony going from the undisputed champion of the world, to a distant also-ran beaten by even their own older technology. Being a fan of the PlayStation, I hope that does not happen. But I was a big fan of Sega too back when they were on top, and we all know what happened to them.

Editor's Followup: I've gotten several e-mails from people who think that I hate Sony, but nothing can be further from the truth. I've owned a PS2 since day one, and even upgraded to the slim version a few years ago. It's because I really do love Sony that I'm so concerned over their reluctance to drop the price. The market is slipping away from them and a small price drop (that everyone knows has to come before the holidays) could help them gain ground. I would love a PS3, but I also don't want to be that guy who buys the system for full price on Friday night, only to find that the price has dropped on Monday morning. There are many other people in the same boat, and if Sony waits too long, they may go over to the 360 to play games like The Beatles Rock Band.