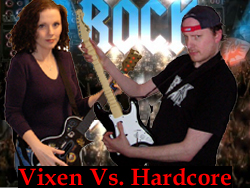 Several months ago, I introduced you all to a friend of mine who, through playing Guitar Hero 2 (and eventually 3) found a way to deal with the symptoms of multiple sclerosis. Since then, Kelly has become somewhat of a celebrity in the gaming industry. Between interviews with Activision and RedOctane to name a few, she is currently taking her story all the way to the National MS Society.

But despite all of her newfound popularity, Kelly is first and foremost a correspondent for GiN and I have brought her back to settle a debate I have had with her on which is the better game: Rock Band (my choice) or Guitar Hero III (her choice.)

Kelly: Thanks Todd. As many of you know, I’m a big fan of the Guitar Hero franchise and am very excited about the upcoming Guitar Hero: AeroSmith coming out in June. However, I recently traded in some old games and purchased Rock Band for the 360. I do have to admit I am a bit disappointed with the guitar.

Kelly: On GH3 I liked how the notes are larger and easier to follow. Goes double for performing hammer ons and pull offs, as they are more clearly defined with a white color in comparison to RB’s smaller note size.

Todd: True, but maybe it’s just me but I feel the RB guitar feels a bit more natural to me. Don’t get me wrong, I really like the Les Paul from GH3, but when it came to playing on hard difficulty, I had trouble sliding my hand down to get the orange fret button. I literally had to feel where it was. Not with Rock Band. Since the fret buttons are recessed it’s much easier to slide my hand up and down to reach them. I was finally able to break free from the security blanket of medium difficulty and start joining my colleagues on hard. The lower fret bars are also quite useful, especially when performing big finishes as I do not even need to worry about strumming.

And speaking of strumming, I do like how I don’t have to hear that darn clicking sound every time I use the strum bar in RB. The only problem I seem to have is that I broke my guitar in too much, so that at times I’m ending up with double notes, which is messing up my multiplier.

Lastly I admit I’m somewhat of an audiophile, and I enjoy using the effector switch on my RB axe. While I use the flanger most of the time, adding a little wah-wah effect to the cover of Paranoid really makes a difference. I know it doesn’t do much but it is just fun to add a little personal touch to my playing.

Kelly: I would like to add that I also have issues with RB’s background effects. The background, particularly the laser light shows and strobe lights distract me, and having a translucent scrolling track bar makes it a bit difficult to concentrate. I’m not the only one who has noticed this. Both my husband and nephew have the same issues as well.

Todd: Maybe I have some sort of tunnel vision when I play but I seem to be able to phase out all the background effects. I would also add that one of the issues I had with GH3’s track bar is when engaging in Star Power/Overdrive. The notes all turn blue, and while it might not be much of an issue for me, anyone who has spatial awareness issues might not be able to recognize the note placement, something that is not an issue with RB, due to the notes keeping their original color. Only the track bar has an effect (the yellow pulsating.) I will admit the white/blue notes to earn Star Power/Overdrive can be an issue for both titles. Again spatial awareness will be necessary for that.

Kelly: Now Todd, I know you talked recently about RB’s downloadable content. Like you I look forward to all the new songs, but it’s slowly sucking up my hard drive space”

Todd: Not an issue for me since I have the 120 GB hard drive on my PS3, and with songs being about 20-30 MB in size, I have nothing to worry about.

Kelly: But not everyone has an Xbox 360 Elite or can afford the larger capacity hard drive, and have you noticed that the more songs you get, the longer the game takes longer to load? And how many songs did you say you had?

Todd: One hundred and six, and yes I have noticed the load issues. Hopefully there will be a patch out to fix it soon. In the meantime I am still in favor of the way Harmonix does their DLC, offering the choice to purchase songs individually for 160 Microsoft Points ($2) or to offer a three pack at a discounted rate of 440 MSP ($5.) Now I will admit that Activision was generous to offer some new songs for free, the most recent being a rerecording of Dream On by AeroSmith to promote their newest GH title, but once again, with the release of the No Doubt pack today, it’s back to the 500 MSP ($6.25) for three songs, without the option to purchase the songs you want.

Kelly: Then of course there are the drums. They have really helped me with my treatment, which I will get to in a moment, but I did have an issue with them.

Kelly: I didn’t buy the $170 Special Edition of RB (and as a result I don’t have the RB axe,) nor was I able to play any in-store demos before purchasing the game, so I purchased the drum set when it was released and was excited to get it hooked up. But once everything was set up and ready to bang away, we discovered that our blue pad didn’t work. I was hoping to return it to the store and get a replacement, but that wasn’t the case. We had to go through Electronic Arts to get a replacement, and that required me to give my credit card number and place a $125 security deposit so a new set can arrive via 2-day air.

Todd: I’m sorry to hear that. Did they arrive when they were supposed to?

Kelly: They sure did and after playing the drums, as well as singing, that was the true aspect that sets the two games apart.

Todd: Couldn’t agree more. I would add also something that follows up on what GiN European Correspondent Chella was writing about last week. I’m sure being a female gamer you’ve had issues on Xbox Live with immature gamers. Seeing that Rock Band is more of a cooperative game than competitive, it’s easier for other Live members to get along without having to deal with the whiners and the 14-year old ingrates calling you a “gay noob” or quitting when the going gets tough.

Kelly: So true, and being able to play the drums with others online is more beneficial to my rehabilitation purposes. I now use both GH3 and RB to help with my dexterity, cognitive, and hand-eye coordination, all affected from multiple sclerosis. The Rock Band drums are helping me build more muscle tone in my right arm, which has spastic monologue, a mild form of cerebral palsy that gives me limited motion.

My YMCA trainer has even noticed how well my tricep and deltoid muscles are developing. She praised me for continuing my workouts and therapy at home, but when I told her that I was playing the drums on Rock Band as my means of working out, I think she was shocked. In the end I don’t feel like I’m working out, but actually having fun.

Todd: And that’s the most important thing. That you enjoy what you’re doing. Now while Activision/RedOctane might be fighting with Electronic Arts/Harmonix, we should actually be grateful to both companies for helping out. They are both providing a great method of therapy and hopefully by us writing this, more people will get involved. Kelly, your annual MS Walk is coming up soon. Do you have any final words you’d like to say about it?

Kelly: Yes I do. Anyone who is interested in helping out, please check out my pledge page.

Combined Rock Band Playlist: The Perfect Drug, The Collector, and March of the Pigs (all master tracks by Nine Inch Nails)