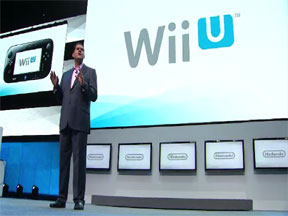 As the only major company with new hardware in the works for the coming holiday season, it was little surprise that the bulk of titles shown by Nintendo at their E3 press conference were centered on the Wii U.

The conference opened with Shigeru Miyamoto explaining the concept behind the Wii U. He said Nintendo wanted to make a gaming system that was not dependent on the television sitting in the room, and that meant having an independent screen, even if it had to be a small one. However, the screen in the controller needed to work as an enhancement to most games, as it did in the many demos shown. It could also run some content independently.

Miyamoto then went on to show Pikmin 3 running on the Wii U. The Pikman were displayed perfectly in HD graphics and their movements flowed like a pack of life-like ants. The controller screen showed a map while the TV screen had the main gameplay.

Next Nintendo President Reggae Fils-Alme took the stage and seemed to be trying to sell the concept of the Wii U for the rest of the conference. He said the Wii U had been designed to change gaming, change the way gamers interact socially, and change the way people interact with their TV. He also mentioned that even though the demos shown would use a single controller, that the Wii U could support two of them.

The most revolutionary aspect of the Wii U was probably the Wiiverse, a social network for players on the Wii U. When the Wii U is first turned on, players will see a bunch of toons milling around main street, which are actually other players. Their icons cluster around signs for games that represent what they’re playing or what is trending. Players can scribble notes onto their controllers to send a thought bubble balloon into the network, to make their toon say something. It was nice that it was the boot screen for the Wii U too, which really emphasizes the social aspects of the new console.

The next game shown was Super Mario Bros. U, which allows for multiplayer Mario play. With four people playing, a fourth person with a controller can act as a helper, throwing down blocks in places to give the players a boost through the level. I suppose they could also hinder the players, but that aspect wasn’t mentioned.

An exclusive title for the Wii U, Batman Arkham City Armored Edition, makes use of the LCD screen in the controller as part of the game. When you use the new batarang weapon, you can control its flight using the screen on the controller. You can also plant explosives and detonate them using the separate controller screen. And you can access all your weapons and gadgets from the armory right on the pad.

Scribblenauts Unlimited also made use of the controller in a neat way. You point the camera at objects, everything from a flower to your dog, and then it transports them into the game where you can modify them. In the demo shown, a dog was turned into a race car. There is also a multiplayer mode and of course the game runs in HD.

In terms of third party titles, the biggest surprise was Mass Effect 3, which is moving to the Wii U. That really shows that the system’s power is on par with the PlayStation 3 and Xbox 360. And Aliens Colonial Marines showed that they are not afraid to get bloody.

Tapping back into its core audience, with 43 million Wii Fit games sold, fitness titles will also be big on the Wii U. Players were shown playing Wii Fit U and jumping on trampolines, shooting and racing on a luge. As a bonus feature, you can exercise using the controller’s screen while someone else watches the TV.

A game called Sing by developer FreeStyleGames was also featured. Its claim to fame is that the lyrics are displayed on the controller, so people can face each other instead of a TV. And everyone can sing at the same time and get recorded by the game, so it could very well be the ultimate party title. Along those same lines, Just Dance 4 was shown, with the person holding the controller telling the dancing players what moves to make. Fils-Alme had a little too much fun forcing the dancers into weird poses, but the game looked like it finally added a new twist to an increasingly stale dance genre.

Not to forget their other platforms, a brief few moments were devoted to the 3DS. New titles there include New Super Mario Bros. 2, which is due out on August 19, Paper Mario Sticker Star, due out over the holidays, and a new haunted mansion game featuring Luigi.

After that brief stop on the 3DS, it was back to the Wii U with a title that likely stole the show for a lot of people, LEGO City Undercover. With an open world, you play a LEGO cop fighting on the mean brick streets of a LEGO city. The game appeared to have an open world, with elements of Grand Theft Auto, but with a cute LEGO theme. A dispatcher gives you missions via the controller, and it can also be used to scan for hidden enemies. Created by Tt Games, they said a 3DS version is also in the works.

Zombie U was one of the last titles shown. It’s a horror survival game where one bite from a zombie means instant death. The Wii U controller is used extensively in the game to do just about everything including managing your inventory, picking locks, scanning for enemies, acting as a sniper scope and even a weapon itself to club the undead.

The conference ended with a walk around NintendoLand, which is basically a theme park where gamers can partake in one of twelve attractions based on Nintendo games.

Fils-Alme ended the show by saying that the Wii U would be available this holiday season. Sadly, we were not given detailed pricing information or any possible bundling options, just an invite to head over to e3.nintendo.com for more information.