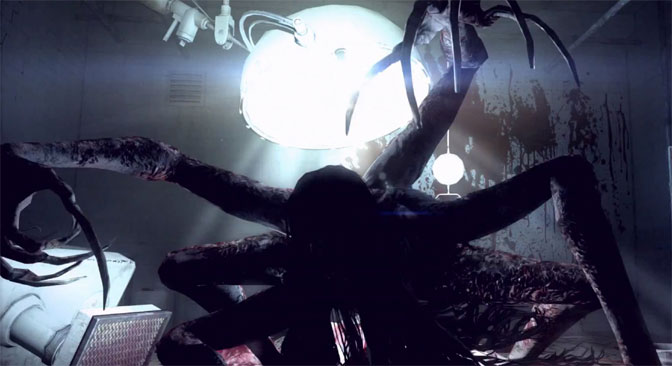 Since it is that time of the year when I get down and dirty with the horror titles this year, I wondered what my angle would be this time around as I delve into the state of horror gaming today. I have decided to talk about the creatures and death in the latest batch of horror titles. Also, this will be the first time in my four year tenure that I am writing a positive article this Halloween. It really helped I got to play a solid title in Bethesda Software’s Evil Within (my review will post later) and the trailer for Resident Evil Revelations 2 looks extremely promising.

Mostly I want to focus on The Evil Within for the creature development. It seemed that many horror games were trying to make the monsters scary, but it usually came out comical. Resident Evil 4 and 5 are REALLY guilty of this one. I can never take a “horror” game serious when the main villain looks like Napoleon Bonaparte. Resident Evil 5 at least brought back Albert Wesker, however even that digressed quickly to pulling inhuman shots and then battling a blob of, well, everything.

Evil Within starts out going back to the glory days of the Silent Hill series. Everyone remembers the pyramid head, an invincible enemy with a larger than life ax that terrorized players every chance he got. Evil Within introduced their own version in a man with a safe over his head and neck.

Armed with a chainsaw, he chases you around the start of the game and you are not allowed to defend yourself. Your character is limping, you have no weapons and his imposing figure is roaming around looking just for you. Since you can’t out run him, you sweat bullets hoping you are never seen. I prayed more during the opening twenty minutes than I ever did at church.

Additionally, there were cut scenes when barbwire emerges from a man’s throat and tightly wrapped around his face, adding a creepy element to an already scary game. The graphics were vivid enough that you almost could see it happening to a real person in front of you.

These days, many games confuse gross for creepy, and think that blood and gore are what make a great horror title. Evil Within made some parts of the environment that you were afraid to touch because you didn’t want to know what was, or could, be inside of it. But the gore was never the focus, just one element of a complete package.

The Resident Evil Revelations series is also making great strides in monster development. By excluding the Las Plagus pseudo zombies with military tactics and assault rifles, the title is returning well to its survival roots. Capcom has learned from their mistake in trying to go back to the very beginning after Operation Raccoon City sank like the Titanic.

Both series have been increasing the amount of varied deaths you can have. Even Tomb Raider, as far away from horror as you can be, included a long list of ways to kick the bucket. Evil Within makes sure you could picture your fate as vividly as possible. My buddy with the safe for a cranium caught me hiding in a locker and dug his chainsaw right in the center. All I got to see was parts of my brain fly out of what was my hiding place. Some of these death scenes give you chills, which is the point of horror.

Overall this was a great year for horror games and it looks like the arrow is finally pointing up. While there were a few flops like Pineview Drive (which tried for greatness), this was much better than 2013 was. So far only Silent Hill is unable to recapture its former glory, though the PT demo looks really promising, so we may have a return of the king yet. Resident Evil is getting closer every year, and now Evil Within sets the benchmark.