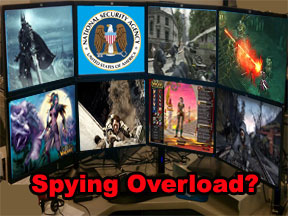 Recently the news broke that the NSA was spying on World of Warcraft and Xbox Live, looking for terrorists. After I read the article, my jaw hit the floor and my blood started boiling. Anyone who knows me knows I like doing a minute amount of online gaming. So when I see government agencies taking a peek at the gaming world I get nervous.

I want to start with World of Warcraft. According to the documents released, the NSA said that terrorists could “be hiding in plain sight.” A terrorist hiding on WoW is about as likely as me getting attacked by a shark in Lake Erie. (For those who don’t know I live in the state of Ohio). The NSA even went to the lengths of having people go undercover as orcs and trolls in the game hoping to pick up terrorists conversations. If terrorists were talking on WoW, why would they be doing it out in the open where spy orcs could overhear their conversation?

When Blizzard caught wind of this, they said, “We never approved this and if they were doing this it was without our consent.” So now at this point we have to worry about every game we are playing having potential spies roaming around digging for anything illegal. While I found this disturbing, it was nowhere near what I felt about the Xbox Live situation.

I do own an Xbox 360, and it got me to thinking about the initial act as well as the next steps. In regards to the present, we have a national intelligence agency listening to what we say or do on Xbox Live. Really? They have nothing better to do than to play Call of Duty or Battlefield and look for actual terrorists? Any word on how many terrorists plots have been broken up by NSA spies playing games? And only on Xbox Live? Is the PlayStation Network terrorist free?

So does this mean that any time we say something that has one of their “trigger” words, you know what they probably are, over a private chat we’ll have the FBI at our door in a few hours? What if I’m playing Call Of Duty and I yell ‘Headshot,” am I tagged as someone to watch? Just the fact that the NSA was digging their talons into Xbox Live was worrisome enough before a thought occurred to me. What if they use this for profiling purposes?

Think about it for a moment before you dismiss it. They could easily look at someone’s gaming history and draw conclusions. Things like ‘Oh this guy plays eighty percent shooting games’ or ‘wow, this girl played Postal and Grand Theft Auto a lot.’ This may come across as paranoid, but then again it has been leaked that this stuff is happening. All of this brings me to my main point.

Online gaming is the direction the industry is going, in fact it’s almost already there. Despite all of the convenience of having stuff on demand, do we allow ourselves to be security risks? Sony kept getting hacked and Xbox live is being spied on, so are we really sure we want the game industry to go this way? As gamers we have a right to privacy, and making sure our money is safe.

In closing, while you’re online, make sure you think that maybe, just maybe, someone is in fact watching you.