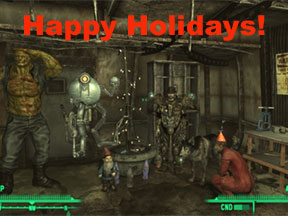 Merry Christmas gaming fans. Or Happy Hanukkah. Or Merry Kwanza. Basically, Happy Holidays from all of us at GiN to all of you. However you celebrate, we hope you have a safe and happy time.

Every year around this time I take a gaming holiday where I devote two (or more if I can swing it) straight weeks to playing computer games. And every year I try to make a screenshot of the holiday cheer within that game. It all started with EverQuest II. Then it was Oblivion. Last year it was Lord of the Rings Online. And this year Fallout 3 took up the majority of my holiday fun time.

Let's face it: this is not a super happy holiday for most of us. The financial crisis that started out in the U.S. has spread to pretty much the entire world. No matter where we work, all of us are probably worried about our jobs, if our pay or hours will be cut, and whether or not we can somehow make ends meet. The world seems bleak, but remember, it's always darkest before the dawn. I have a lot of faith in our incoming president and people in general. We may have to tighten our belts for the short term, but the world will get better. It always does. So hang in there. We are all in this together, and together we will come to the light at the end of the tunnel.

In the meantime, I can't think of a better way to lose yourself than to play some in-depth computer games. Let the mundane world wash away amid the onslaught of monster hoards, marauding battlecruisers, zombie infestations, nefarious crimes that need solved and adventures to be had.

For my gaming holiday this year, I ventured into the capital wasteland world of Fallout 3. Without a doubt this was one of the best role-playing experiences for me this year, even if the game world is a little bit shorter than those of us used to Oblivion-like games expect. But the game world itself is intense and almost living, such that you will really believe in it, and want to make the wasteland a better place.

In the little photo are some NPC friends I met in the game, though getting them to pose was like herding cats. I feel like they are almost like real friends, so I thought I would introduce them. The big yellow guy on the left is Fawkes. He's a mutant who retained his intelligence after the forced evolutionary virus failed to make him a bad guy. He insists on following me around the wasteland to pay me back for rescuing him. And he's great to have along, though not so much for my enemies.

The robot beside him is Wadsworth, my butler. Always quick with a glass of purified water or a highbrow joke, he's a part of the family.

The garden gnome under the dead Christmas tree is one of my collection. Finding undamaged ones after a nuclear war is tough, but I have found four so far, plus a bunch of broken ones. He's guarding the Nuka-Cola under the tree and the Nuka-Cola Quantum in the bright blue bottles.

Editors note: My consumption of Coca-Cola has increased dramatically since I started playing Fallout 3. Coke should pay Bethesda for the subliminal advertising.

That's me in the power armor and fedora. It's kind of small in the picture, but my character's face looks just like mine.

The dog is Dogmeat. You will recognize him from Fallout 2 as your faithful canine companion, even though he likely got killed at the end. I mostly leave him at home because I don't want him to get killed this time around, though there is a command line cheat to make him invincible. I just haven't used it. He's the best friend a wastelander could hope for.

Finally, the guy in the suit and hat is Sticky. I was escorting him from Lamplight where the kids live to Big Town since he turned 18 and thus was kicked out, and figured I would invite him to the party. He's wearing the slaver Eulogy Smith' best suit, and no, Eulogy didn't part with it lightly. Trust me though; Eulogy won't need it anymore.

Radiated worlds seemed to be a theme with me this year, as I also spent a good deal of time playing S.T.A.L.K.E.R. Clear Sky. Although I enjoyed the game, the ending blew chunks, though because this was a prequel, the ending was already set in stone. The open world concept was great, though I think more could have been done with the faction wars angle. Still, it kept me going for a few months. And the single player game was awesome (thanks for letting us repair our weapons finally) right up until the very end.

And then there was Farcry 2. The African world portrayed in the game was not the subject of a nuclear disaster, but it might as well have been. The desolate landscape is wracked by poverty, and there is always someone trying to kill you for whatever you might have. The fact that you play a scumbag mercenary too, working for conflict diamonds no less, was a nice twist if you like playing the bad guy. And even though you're a really bad person, everyone you meet in the game is worse, almost.

Near the end of the year, I was surprised by Left 4 Dead, a zombie shooter that was very much like a movie, with four survivors trying to get out of bad situations involving hundreds of killer undead. But the real joy comes when playing the game online, with some players being survivors and others taking the role of zombies. For a quick adrenaline rush, there is no better drug than Left 4 Dead. Although it's single player mission is a little shallow, the multiplayer more than makes up for it.

On the bad side, we have the horrible mess that is the PC port of Grand Theft Auto IV. Whoever ported this thing needs to get into another line of work. The game refuses to recognize high-end PCs, instead confining game settings to minimum. Trust me, if my gaming PC can play Clear Sky, it can handle GTA, whatever your stupid diagnostic program says. And after applying the patch, instead of fixing the problem, it caused my character to spin in circles endlessly. Rockstar's solution: unplug your human interface device and play the game that way. Guess what numbskulls, my human interface device is my Saitek Gaming keyboard! You can't play without it. From the boards I saw, PC gamers are livid with this unplayable mess. Hopefully Rockstar will fix the problem, though they have been terribly slow to do so, or even acknowledge the problem so far.

Getting away from the murder and mayhem, I was pleased to spend hours and hours with King's Bounty: The Legend. The game is a remake of the classic hit that my friends and I spent hours playing in college. The hand-drawn graphics are gorgeous and look ripped from the pages of an expensive storybook. The tactical battles take keen wits instead of twitchy trigger fingers, making it a perfect game for the strategists among us who enjoy a little eye candy.

Mount and Blade also impressed me this year. The medieval simulation literally lets you do anything in the game world. And you actually command hundreds of troops in combat in real time, with you taking the role of one of them too. Fight in tournaments. Help poor villagers in need and train yourself and your troops into an elite fighting force. Although the graphics are a little dated, the complex world and open ended choices have been growing quite a huge audience, myself included.

Of course I'm still playing Lord of the Rings Online with my guild, The Keepers of the Red Book (you know, named for the book that Bilbo wrote and Frodo added his own adventures into). We play on the Meneldor server if anyone wants to hang with us. My character is Circee the super-hobbit guardian, protector of the weak. Now that the mines of Moria have been opened, expect me to be away for a while trying to explore down to the 21st level and beyond.

Although 2008 wasn't the stellar year in gaming that 2007 was, there are still a ton of great choices out there for gamers of every stripe. So do yourself a favor and grab one. You deserve a gaming holiday, even if it's just a day or a few hours. You'll be surprised how the cares of the real world will melt away.

So that was my year in gaming. Till next year, I'll keep the wasteland safe, and put a present under the tree for you.