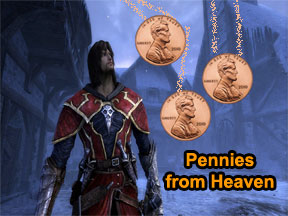 With the economy the way it is, many people are really picking and choosing their titles. I’m in the same boat where I am unable to purchase every single game that shows promise. Nevertheless, I always take a chance here and there on a no-name title or two. Over the past few weeks, it dawned on me that there are some good values out there in the game market. Here is a short list of some great games to keep you entertained on a budget. Some are under the radar, while others have some name behind them. A few are just getting a bit long in the tooth, and can be found in the used game market for a fair price.

This is by no means a complete list, but if I can help my fellow budget travelers find some fun titles to keep them entertained, so much the better. If you have some similar suggestions and approximate prices, feel free to e-mail me, or simply post your suggestions in the comments below.

Here are some titles that are keeping both me and my wallet happy.

One of many games to go almost unnoticed is the first person shooter genre is Singularity. I picked this game up for my Xbox 360 for about $10 in Ohio. Singularity takes place on a Russian island where a new material called E-99 was located. You are an American soldier going to investigate some strange activity, only to find out there was a tragic incident and the E-99 caused a rip in time. With an engaging story and solid mechanics, this makes a great pick up. While nothing to say Game of the Year about, for ten bucks I found it better than most full priced games I bought.

My most talked about AAA title of 2012 makes yet another list. It surprised me to see how far the game has fallen in price. Amazon had this game listed for barely over thirteen dollars. While Blades Of Time may have fallen between nearly every crack in the industry, it still deserves a second look. If you need a hack and slash or fantasy fix, then go ahead and join treasure hunter Ayumi on her time manipulating adventure through a well-drawn map. Just be prepared for some off-timed voiceovers.

That’s right everyone, a GiN game of the year award winner in best musical score for under twenty dollars. I will admit I was shocked to see that low of a price tag attached to this game. Regardless, there is a great amount of play time and a top notch story in one of the most popular Final Fantasy series games in years. Even if you never played the first game, you can still get a great amount of entertainment value from this one.

The original Baldur’s Gate won for RPG in the very first GiN Game of the Year Awards back in 1998. Then we got treated to expansion packs and of course Baldur’s Gate II. But then top-down view RPGs fell out of favor due to the 3D craze, and this deep Dungeons and Dragons-based title went away forever.

Only it didn’t. Like a litch, it came back in the form of the re-vamped and re-tooled Enhanced Edition. Not only does the game run on almost any PC of any level, from today’s gaming rigs to yesterdays older hardware, but new content and characters have been added to the game. The Tales of the Sword Coast pack was thrown in for free too. No wonder readers voted it RPG of the year for 2012, a full 14 years since it originally came out. Let’s see Skyrim pull off a similar feat a decade from now.

Castlevania’s first game on the Xbox was a solid title, and now is great time to pick it up and try it out. On the 3DS, a prelude was made called Mirror of Fate which leads up to the second game. So with the first one hovering around twenty dollars, you can see if the second game would look appealing. Lords of Shadow has a well developed story and environment, and Gabriel is one of my favorite characters in the series thus far, because he seems like an actual human being instead of some predictable "I will cleanse the earth" vampire hunter.

This one has retained it’s value better than most, and once you pop it in you will see why.

So that’s how I’ve been occupying my time on a budget, and I wanted to pass on those suggestions to you. If you are also trying to pinch some pennies, consider these games. Because you shouldn’t have to give up fun just because of a little thing like an economic downturn.