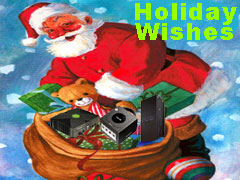 The holiday season is here in force, and for once the predictions about gloom and doom in retail sales seems to not be coming true. In fact, the last report I saw come across my desk before leaving for a long winter’s nap said that holiday sales were stronger than expected and much better than last year. And the GiNDex keeps slowly creeping up a bit, which is a good sign considering last year we took a nosedive around the holiday season.

But what to buy?

Chella saved us all from the obligatory Christmas wish list story, choosing instead to host a holiday party for a few of her more eccentric friends. But don’t think that means you are getting out of this that easily. Here are some of the coolest games that I have played this year that I think would make a fine addition to anyone’s tree.

First off, let me say the depression at having solved Morrowind has yet to end. You put 800 hours into a project and it makes it hard to say goodbye. I have resisted the urge to make a new character and challenge Bethesda Softworks epitome of excellence again, but only just. Those of you who own Xboxes and have not had a chance to try the epic RPG before should make sure to request the new version of the game – with both the Tribunal and Bloodmoon expansion packs included. PC gamers should give Bloodmoon a try. By the time I hit that pack I was pretty powerful, but it still gave me a good challenge and has a lot of nice plots for some really in-depth computer role-playing.

I am not much of a puzzle gamer. I hated Riven with a passion. I think I had more fun preparing for my SATs back before college. But the newest game in the Myst series Uru: Ages Beyond Myst, is quite a change. First off, you play the game in first person like a shooter, or third person like an adventure game. Some puzzle gamers may not like the addition of jumping puzzles and action-based puzzles, even if they are rudimentary. But it shows that Cyan is willing to evolve beyond slide show games and break into the modern world. Plus, the brilliant visuals and the beautiful soundtrack will keep you enthralled with this exploration-based title. When the massively multiplayer online game comes out in January, bookworms everywhere will unite. I anxiously await Greg Crowe’s analysis, our resident puzzle expert, of the game.

My perception of the world is a bit skewed. I play games on my PS2 some, but I have always been a PC gamer. So when Halo came out for the Xbox I thought it was no big deal. This year when it jumped to the PC, I got to try it in my environment with my right hand on a mouse and my left working the keyboard. I was in my element, and found out why Halo has so many fans. The combination of vehicle and foot combat is really amazing, along with the interesting and graphically pleasing world.

Another jump from the Xbox that I absolutely fell in love with is Star Wars Knights of the Old Republic. I will admit something. I have been turned off by a lot of recent Star Wars titles. Even Bounty Hunter just seemed like a normal shooter that happened to be set in the Star Wars world. But Knights is different, way different. This game is amazing. Our publisher Nate Wooley said "I actually believe that there are little people in my Xbox talking with and interacting with me." And he was right. When I played the PC version it not only had great RPG and combat elements, but also one of the best storylines I have ever experienced in a computer game. Other than some really top heavy system requirements, I don’t see how anyone could be disappointed in this title.

I spent a lot of the year playing Grand Theft Auto: Vice City. It helped that I hooked my PS2 up to a projector and played on a 15-foot screen – which annoyed both my wife and my cat for weeks. But where GTA3 got too difficult for me to play, Vice City seemed to have just the right amount of difficulty and fun. Missions were hard, but not so hard that playing them over and over again would not eventually lead to success. And come on, there has never been a game with a better soundtrack. All those 1980’s songs rock! I would sometimes just find a car with a good stereo and sit there listening to my favorite stations. I’ve asked for the soundtrack for Christmas, so we will see what happens.

Silent Hill 3 wins the award for spookiest game from me. Not since Realms of the Haunting has a game creeped me out so much, to the point that I could not play for more than an hour or so at night without getting too freaked out.

Space Colony, which is the follow-up title for FireFly (the folks who created the Stronghold series) turned out to be a real sleeper hit. Nobody much knew about it, but the humorous gameplay and wacky characters keep people playing. I generally find The Sims to be a bit on the boring side, but if they had attitude like the characters in Space Colony, it might shake things up a bit.

I would get beat up by Nate if I did not mention Railroad Tycoon III. I’ve not played the game yet, though they sent me an extra copy, but from what I hear it is the most amazing simulation of its type ever created. I may pop it in over the break just to see what all the fuss is about, but we will have to see.

Honorable mentions go to both Temple of Elemental Evil and Armed and Dangerous. Temple of Elemental Evil is one of the most beautiful RPGs with a traditional top-down view ever created. If it weren’t so riddled with bugs it might have scored better. I think I actually ended up playing Icewind Dale II longer, just because the game was more solid and I had no crash worries. Armed and Dangerous is a shooter from LucasArts. It is incredibility funny, perhaps the funniest shooter ever. The only problem is that it is really difficult to play. You don’t get a lot of rest during levels, so you are constantly in combat. Some might find this to be a great feature but without even a friendly corner to hang my hat for a few moments, I can only play in shorter doses.

So there you have my picks for the coolest games of the year. We will be starting the nomination process for the annual Game Industry News Game of the Year contest, so you will soon have your chance to cast your ballot for your favorite titles.

But whether you are a puzzle gamer, a shooter, an RPGer, a horror gamer or like your fare more casual, take time to enjoy life this holiday season (and time away from your in-laws) to play something. I am convinced that if everyone in the world was a gamer, there truly would be world piece. Nobody wants to go to war with someone whom they can talk for hours about how Pazaak in Knights of the Old Republic always cheats you by forcing you to go first, or which Jedi powers are most helpful.

So here is my Christmas wish: Games for everyone. (And through that, world peace.)

Have a happy holiday everyone!