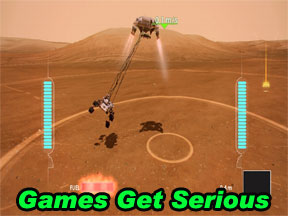 This week I had the good fortune to sit in on a seminar conducted by Eric Hackathorn, the program manager of the National Oceanographic And Atmospheric Administration’s Fragile Earth Studios. The topic was how well computer games entice their users, and how the federal government could do a better job at being similarly engaging. It seems the game industry is finally doing something right according to the feds, so much so that they want to copy us.

To show how well games do what they do, he used Blizzard’s World of Warcraft as an example. He asked the question ‘How much collective time has been spent by everyone playing WoW since it began ten years ago?’

Now, I know that WoW is the most popular MMO, and has been for sometime. So I thought the answer would be something like 10,000 years, perhaps even 100,000 years on the high end. Pretty much everyone in attendance thought along the same lines, though most people guessed much lower than me.

So what do you think?

I’ll give you a couple lines to think about it.

The answer is an astonishing six million years has been collectively spent playing World of Warcraft! Good gravy! That’s longer than creationists think the Earth has been around.

Hackathorn then asked, ‘What if we could put that same effort into something real?’

It’s an interesting question. One would think that we probably would have USS Enterprise like space travel, the cure for cancer and the Matrix by now if we did. Six million years worth of research would certainly yield some results.

The point of the seminar was to convince feds that the technology and methods used in games can be brought to bear for things other than saving the world of Azeroth. For feds not used to gaming, that meant teaching them things like leveling, badge earning, leaderboards, and the joys of getting loot and becoming elite. Successful game developers also know how to let their players ride the sweet spot between too-easy and too-hard, letting players get into the ‘flow’ of a game, where all track of time is lost and it becomes all about the journey.

Not every game successfully does that, but enough of them do that even the ‘adults’ in the room are starting to take notice, and give the game industry the respect it deserves. We are already starting to see this type of movement from some government agencies. Just this week NASA released its Mars Rover Landing Game as an Xbox exclusive. The game lets you try and land the new Mars Rover Curiosity safely on the red planet. And yes, you can earn gear for your avatar and badges for doing so. Since the game is free, and looks pretty fun, it will likely drum up a lot of support for NASA, an agency that relies on public support to escape the yearly budget axe that falls into most agencies these days.

There are many other projects like that in the works. In fact, the Website at Fragile Earth Studios pretty much looks like a game studio. Some of the things they are doing, like a virtual Alaska Exploration Game promises to let users fish for King Crabs, survive a winter storm on the Bering Sea and climb to the top of glacier. Kind of sounds like WoW without the elves?

So there you have it. Other industries and even the government knows that the game industry has put lightning in a bottle. We know what people want, and provide it for them in great heaping amounts. Collectively, players have spent six million years concentrating on one game. If all gameplay was added up for every title, it would stretch into the billions of years quite easily, even without adding in my personal hours on Skyrim and Oblivion. And if Uncle Sam wants to use those same game techniques we know and love to do some good, so much the better. Just don’t let forget where all those ‘fresh new ideas’ came from first.