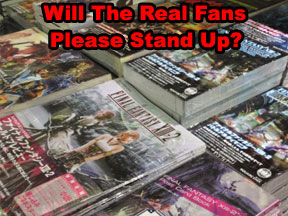 The Borderline of Video Gaming and Other Entertainment

When the act of enjoying video games comes to mind, most people would imagine a person, or several people, physically playing the game, sitting (or standing) in front of a console and a screen. But in this modern era – whether you realize it or not – video game consuming is not limited to that act alone. Video games or elements of video games are often recreated in other media in a term which most Japanese refer as "media mix" strategy, or in English, media franchise.

Back then when "Final Fantasy VII Advent Children" released in 2005, I was one of the fools who were irked at the new FFVII fans that have never played the game, but became attached with the series because they watched the movie. There’s a little bit of a superiority-complex because I feel I knew better from playing the game, and considered them not as "true fans" because they didn’t start it the way I did. And I know it’s not just me. But even if they didn’t play it, these new fans keep on purchasing resources regarding the game, character fanbooks, illustration books, merchandises; and before I knew it, they had become more absorbed into the franchise more than the gamers, thus paying back much more money to Square Enix than those of us who only bought the game software.

So, who do you consider the "true" Final Fantasy fan here?

The ones who played the game?

Or the non-gamer enthusiasts who pay more for the media franchises?

Media mix policy is a probably a common policy applied by franchises all over the world, but in the context of video game media mix, there is no country that does it like Japan. Just take the aforementioned Final Fantasy franchise. Simple ones such as figurines and dolls – from the common cheap ones, to the order-made expensive one – mug cups, perfumes, up to well-made upscale jewelries that cost $300 a piece. The FF’s potions and elixirs were even made into soda drink, sold in supermarkets and convenience stores.

The franchise keeps on producing new products while also publishing variations of the brand contents (sequels, untold side stories, arranged music) into various media such as animation, books, novels, and CDs. These actions maintain the longevity of the brand while also providing other entrances for new consumers: the ones that did not play the game at all, in such way that it is possible to be enjoyed without even directly consuming the video game. It also attends to the past video game titles consumers, who were estranged from video game consoles, who eventually can keep up with the brand through derivative consumption.

What makes new entrances become possible is the almost non-existent borderline between video game and its two neighboring entertainments: animations and comic books in Japan. In the past of Japanese culture, countless animation titles have transformed into books and games, and vice versa; making the situation now easier for consumers to switch between media of consumption; and at the same time making it difficult to actually guess which was the "original" media of a certain brand. There is also the factor of similarity on narrative and visual styles of these products that smoothens the interaction between the media.

Another factor that pays for the spread of a certain video game title is simultaneous product publications: such as books, CDs, and merchandises soon after the game release, followed by another sequel. The continuity of a product release one after another is also making the hype easier to maintain. Although this sounds like depreciating the original "video game" medium, it’s actually shows the potentiality of a "video game" medium to expand and become a "brand" that can be widely consumed. This can also be a logical explanation on why the top ranked 2011 games in Japan are held by the popular "brands" of Japanese games, such as Monster Hunter, Final Fantasy or Tales of Xillia.

Back to my friend’s blog entry about the Final Fantasy books in the bookstore in Singapore. While scenery of stacking popular video game books and related merchandises at the release of the game in a non-video game store is normal in Japan, the number of the fanbooks stacked in that corner surprised me. It’s stating that there are many of people there, gamers or not, ready to buy the secondary fanbooks. This can actually be a statement that a similar method of consumption is present in other parts of the world, at least in South East Asia.

Anyways, gamers/fan or secondary gamers fan, all of them still paying back to the developer who worked hard for these games!