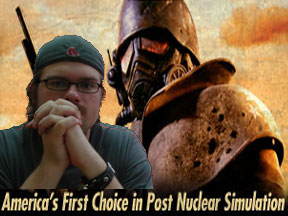 The stories of man’s fictional brushes with near-extinction will never get old. From Cormac McCarthy’s heavy account of a world lost to death to the zombies that fill any Romero flick, popular entertainment has maintained an ongoing relationship with cataclysm and mass cleansings of the population. Enter the game franchise Fallout, and what has become the quintessential post-apocalypse title of the gaming world.

Fallout takes the best archetypes of classic "Klaatu barada nikto" science fiction and brings them all together to create a world ravaged by nuclear war. And now with the latest Fallout release let loose upon the world, I find myself wondering why, with so many similarities to its predecessor, I’ve never been happier to have a game in my console as I am with New Vegas.

This won’t be a critique dominated by the new controls and features of Fallout: New Vegas beyond what we need to call attention to the similarities it holds to Fallout 3. From what I’ve seen, there are minor tweaks to the effects of items and the usage and utility of weapons, ammo, and literature, but for the most part, New Vegas delivers the same experience on the gameplay end of things as Fallout 3 did two years ago. And that’s just fine.

What this assessment boils down to is as follows: If you like Fallout 3, you’re going to love New Vegas.

The reasons why you are going to love New Vegas really never had anything to do with controls or innovations in gaming mechanics. Rather, they are all about the reasons we can’t wait for the next installment. We simply want to see what’s survived in this world of mass destruction.

The rubble that is the USA has become a treasure trove of the human condition pushed to its (often comedic) breaking point, and for glimpses of that, gamers will line up outside of game stores at midnight just to have a copy of the game in their hands as soon as possible. And if it’s stories that the players want, then its stories the players shall have.

Just in the short distance between small village of Goodsprings and the devastated town of Prim, New Vegas delivers enough decisions, interactions and ghosts of a lost past to keep a gamer entertained for hours-if the game is played carefully. If the game is played without finesse, all of these developer efforts could be lost, but even then the replay value is increased.

New Vegas has been criticized early as not being a true sequel to the franchise of Fallout, getting by with just enough of a map and just enough changes in the gameplay to push it away from being labeled an add-on package; however, to this I say those critics have got it all wrong.

In terms of gaming, the mechanics might not be a step above Fallout 3, but why would they tinker with a working system of gameplay when the praise of that system is still in full swing? The same can be said of the visuals of the game; as long as they remain engaging and expansive, there’s little need for a design overhaul.

What I hoped to see in the aftermath of Fallout 3 was simply the ability to explore new wastelands in the global setting of this game, and for that, New Vegas delivers in spades.

Now, with that out of the way, we can start working on a title set in New York, Chicago or even one of the more populated spots in China to get a view from the other side of the battlefield.

Editor’s Note: It’s great to see that sometimes, gamers just want a good sequel. Our full review of Fallout: New Vegas is cooking, and we should have it posted here very soon. Our guess is that it’s going to be a good one.