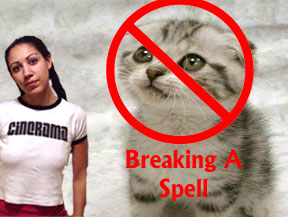 This week I’ve been trying to get through Red Dead Redemption in order to make way for Fable III. All was well and good until I discovered something I’ve dubbed a spell breaker. These little critters lurk in games and rear their ugly heads when you least expect it, ruining your gaming experience and all the developers’ hard work.

So, I’m playing RDR. There I was riding through Mexico, when an army General requested my help in suppressing some criminals. So I jumped off my horse and set to murdering women and burning houses.

The job done, I decided to have a stroll about and managed to slip off the pier into a pond. Oops I thought, until the screen turned red. I had died. Instantly. Now, let me just clarify, this was no raging river, but more of a stagnant pond thing. There was absolutely no reason for John Marston to cark it.

Then I remembered. This is a hangover from the GTA games. Fall in water and you inexplicably die. This is a spell breaker that just won’t go away.

Consequently, I was a little annoyed, because I had to ride across the desert again, talk to the General again, blah blah and do the mission over again. Of course, I didn’t complete the mission second time, or third time and frustration turned to rage and an unhealthy fear of videogame water. One slip and I’d have to repeat it all!

Why can’t we just say Marston can swim? Or perhaps he can’t swim, but he has a life bar and can scramble out of the water before it runs out. I mean, who dies, instantly, on touching water? Nobody, that’s who. It just makes no sense and is incongruous in a game that has gone to such pains to be authentic.

RDR isn’t the only culprit. Spell breakers litter games. The door that won’t open. Very low walls that can’t be jumped over. I have jump, just let me jump. Seats that you can’t sit on – another spell breaker in RDR.

We’re so used to open world gaming that we expect to be able to interact with everything. Why do we have to wait for the developer’s permission, in the form of control prompts?

"Press x to pick up apple."

But I don’t want to pick up the apple, I want to stroke the cat, why won’t it let me? That’s a spell breaker right there.

A friend of mine was playing Marvel Ultimate Alliance. As the Incredible Hulk he particularly enjoyed the "Hulk smash" aspect of the game, until he hit a spell breaker. He came upon your average sort of wooden door, so of course Hulk steps forward and tries to "Hulk smash," but he’s denied. Instead, Hulk must run around finding three pieces of the lock, despite his instinct to just kick the door down. Now, unless that door was magic or my friend had failed his damage roll, that thing should have been off its hinges. Spell breaker.

Developers create beautiful worlds, with fog and rain and the most stunning sunsets, illuminating incredible cities and fantastical architecture. These worlds are populated by characters who bring the story to life, interacting with the protagonist and enriching the world. So much effort is put into period details or real life elements. It’s a shame when a game draws you in so effortlessly, only for a sudden spell breaker to hurl you back out.

So, for heaven’s sake, can we just allow characters to swim or at least flounder!? Can doors open, fences be jumped and let us for pity’s sake stroke in-game cats if we want to.