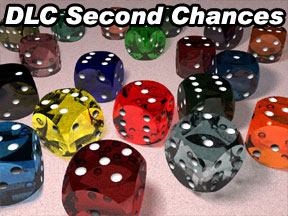 It’s been a fun week here at GiN looking at DLC (downloaded content) that is available for the consoles. It’s a whole other world now with system-exclusive titles available for download for only a few dollars each. We looked at two titles, Landit Bandit for the PS3 and Ancients of Ooga for the 360. Both games seemed like a lot of fun to our reviewers, and more than worth their low sticker prices.

Because this week was mostly handled by the reporting staff, I had a few rare moments of free time. It’s funny because when people hear that I’m an editor at a video game magazine, they assume my days are filled with marathon sessions of Halo with friends and endless gaming. While not entirely untrue, that’s kind of like thinking that a gourmet chef in a fancy restaurant spends their days kicking back eating the best food and hosting big shrimp cocktail parties with their buddies. But this week did give me a little time off, and I decided to embrace DLCs in the spirit of the theme week.

People forget that DLC gives a lot of games a second chance. It’s not all original titles like Landit Bandit and Ancients of Ooga. Some games that are originally released in traditional boxed format, or even as an arcade machine, make their way to DCL format eventually. Some are even released simultaneously along with more traditional means.

So I took my free time and decided to give some games a second chance, although for me, in one case it was actually a first chance.

I started out big, with Dragon Age: Origins. I know this game was nominated for a GiN Game of the Year Award, but I never personally got to play it. I found a copy on Steam for the PC, so I figured I couldn’t pass it up. Downloading a huge game like that took a while, one of the problems of DLC, but I’m really glad I did. And one advantage of picking up a game long after it’s released is that there are likely many DLC packs of its own by the time you get around to playing. Several were included with my copy of Dragon Age, and I have the option of buying more.

I have to say that I think Dragon Age got a bad rap here at GiN. I know several people have called it boring, but I call it in-depth. Every character has a rich back story and there’s a novel’s worth of background text talking about the world you’re in. You can read an entire history of the land, the people, the religions and the cultures. There are even six, hour-long opening stories you play, each one tailored to one character type. Some of the stories even overlap a bit. And you keep learning more about that back story as you play and develop your character. As of this writing, I’ve gone through four of the six opening stories and my only problem is that I love all my characters, so I don’t know which one to go through full the game with.

And talk about moral choices! Dragon Age is filled with them. I always complain about games with no storyline, which don’t push characters or players in any way. Here you’ve got more than you might be able to handle. You have to decide if you want to kill innocent people, rob them, sleep with them, be a good or a bad guy or almost any type of choice that an adventurer might face. Do you want to conspire to murder your brother or stay your hand, even though you suspect he’s out to get you. Do you want to entice the beautiful elf maiden to your bedchamber even though it might get her in trouble with her mistress? How about helping a friend even though it could mean a death sentence if you’re caught, or turning him in to earn huge brownie points with your superiors.

And the best thing is that there’s no slider bar for how good or evil you are. I always thought games like Fable kind of wimped out on that. Evil characters look ugly and good people are beautiful there. No, in Dragon Age, you can act as evil as you like, and will still look the same. And no powers require you to be good or evil enough to use them. Your choices do affect the story to be sure, but you are not moved up or down an artificial moral compass based on your decisions. If you can live with your choices, then do what you please. It’s called role-playing, and for once a game treats us like adults.

The combat engine is quite good too, and reminds me a lot of Neverwinter Nights with real time battles that can be paused so you can give yourself and your party orders. The graphics look good, and run well on a single core P4 gaming system. As a boon, you can even get a pet at one point (or have your character start with one) who levels alongside you and is quite an advantage in most fights.

The other DLC I tried this week was something I hinted about on our Facebook page at www.facebook.com/gameindustry which originally came out in the arcade. The game was called Rampart, and featured different stages using vastly different skills. You had to build a castle using available pieces, kind of Tetris style, in one stage and then fire cannons to defend it in another. If some of your walls get destroyed, you then have to repair them so that at least one castle is fully enclosed before the next battle stage. Even placing your castle is part of the strategy. Ones close to the water (you are being attacked by ships) will be able to fire cannons more accurately, while ones farther back will be safer once infantry discharges in later stages. The PS3 network game I downloaded looks great, perhaps better than the arcade version, and retains all the flavor of the host title.

In the arcade I was really fascinated with Rampart. The game was so cool (and sure of itself) that at some point it wouldn’t let you continue, even if you had extra quarters. Instead it wanted you to start a new game, get more skilled and then try and tackle the higher levels. I guess it was making sure you got your money’s worth. I thought the game went on forever, but apparently there is an ending if you can reach it. I’ve not gotten there yet, but I’m hopeful.

Now my only problem is that next week it’s likely back to work, and I haven’t beaten Rampart, nor even scratched the surface of Dragon Age. Thanks to DLC, I may be faced with a moral decision of my own: To call in sick or head back to work?