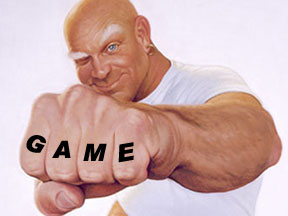 Normally when I, in my role as GiN chief editor, get roused from the mountaintop to come down and write something, there’s a bit of a crisis. Most of the time I’m too busy editing other people’s reviews or columns to do much else these days. My last couple editorials have been about the economy and games, my (proven wrong) prediction about Sony taking a hit when they refused to lower the price of the PS3 (though they did finally release the cheaper PS3 slim), and our farewell to GiN friend Gary Coleman.

But this week I wanted to point out a trend that isn’t actually disturbing. In fact, if the lifelong critics of our industry were paying attention, they might even, gasp, praise us. That won’t happen because it won’t make for good TV, or a good public hearing, but that doesn’t mean we can’t smile a bit among ourselves.

Are games getting cleaner?

I realized this about halfway though Rockstar’s latest masterpiece, Red Dead Redemption. Although there’s a lot of combat, it never really rises above what we would see in a spaghetti western. But more telling is that even though there are tons of prostitutes in the game cluttering up every saloon from here to New Austin, the hero of the game never partakes in their pleasures. This seemed a little strange to me at first, but you play a reformed outlaw whose wife and kid have been kidnapped. Although he has to do some bad things to get them back, he endeavors to remain faithful to his wife while he’s doing it. Compare that to The Ballad of Gay Tony where your character is participating in casual oral sex whenever he goes to work, and you’ve got quite a dichotomy.

That Rockstar is going clean is a bit shocking, but let’s look at some of the other games we’ve reviewed lately. Love and Death: Bitten was a casual title, one of a growing breed that seems to be steamrolling into amazing popularity. Those games, like Bitten, are almost never dirty. Then we have Yakuza 3, in which a former Japanese mafia kingpin retires to run an orphanage. We spend a lot of the game playing baseball on the beach with the kids, working on their interpersonal problems and lobbying to keep their home open. And we loved every minute of it. The same trend could apply to Final Fantasy XIII, which had an amazing plot, a good love story, lots of conflict between characters, and generally stayed completely clean with no real blood and certainly no gratuitous sex.

I’m not saying that all games are going to be clean now, or even should be. Dead To Rights: Retribution has some of the bloodiest, neck breaking, gritty, in-your-face hand-to-hand combat and slow motion kills that we have seen in a long time, and that’s fine within the concept of the game. Heavy Rain dealt with some very dark issues and was littered with character nudity and even sex between characters, but it was all done in a very mature way that advanced the plot. And anything that contributes to the story is a good thing, whether "dirty" or clean.

I guess what I’m noticing is that blood, gore or sex don’t have to appear in a game for it to be successful anymore. And it certainly doesn’t have to be the hook to rope players in. In fact, games where that’s the only thing going for it, probably won’t do very well these days. Game player’s tastes have matured and we tend to expect good story and gameplay first. If you want to give us sex and violence after that, and it makes sense in terms of the story, so be it. I for one won’t complain. But gone are the days where the fact that a game lets a player decapitate someone, or sex up a lot of girls, automatically gets it into the top charts.

As the industry gets ready to head out to another E3, which by all accounts seems to slowly be climbing back up the ladder towards the relevant show it once was, I’d be surprised if bloody or overly sexed titles took center stage like they once did. It’s almost like the world of Red Dead Redemption in which the Old West is succumbing to telephones, motor cars and law. Our industry is changing. We’re becoming more mature, more bound by society’s rules and more demanding of our developers. We might still ride the back trails once in a while and talk about the good old days of Soldier of Fortune and Hot Coffee, but it’s not our path anymore. And while we should celebrate our past, it’s time to look to the future where bigger and better games await.