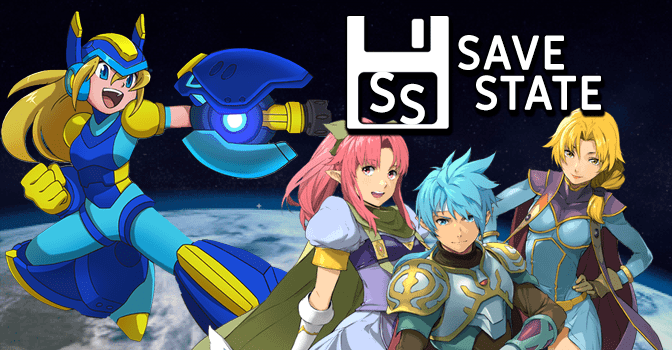 Welcome to Save State, where we like sci-fi, Mega Man, roguelikes, and indie games. In that order, in fact. It’s a mystery, then, that the game 20XX was purchased but then placed in the backlog with oh so many other games. A roguelike action platformer that controls a lot like Mega Man X, complete with procedural level generation and randomized power ups sounds like quite a unique marriage of ideas, since the core strength of Mega Man typically lay in its tight level design (except in the case of X6, which has a…. nice soundtrack). 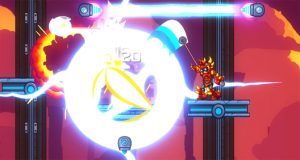 20XX arose from the backlog, begging for some play time, to which I acquiesced. The game began with a pretty typical call to action- evil robots are doing the bad, so X and Zero, I mean, Nina and Ace have to stop them. There are some quirky little story bits with humorous dialogue thrown in after defeating a boss, but for the most part story isn’t a focus of this game- you’re Ms. Jumpnshoot, and your job is to jump and shoot your way through enemies and obstacles unless you play as Ace in which case you’re Mr. Hacknslash.

For the most part, Nina is a ranged character like X with different bullet type options like wall-piercing shots, cross beams, and forked shots. Ace plays closer to Zero with weapons somewhat similar to the Mega Man Zero games, like a beam saber and a spear. You have a choice of which levels you’d like to play as you progress, and there’s a boss at the end who relinquishes a power upon defeat, just like Mega Man. Weapon weaknesses are also in 20XX, inspired by Mega Man, and you can deal more damage to the Death Lotus by using the Boomerang Blade from the Rollster boss, who is in turn weak to Flame Shield, for example. 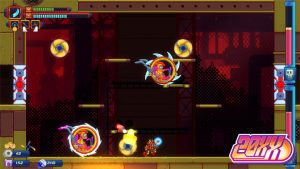 The stages you come across also increase in difficulty as you progress, with stages being made up of playable chunks that load in randomly, and after playing for a while you can get a good handle on what might be upcoming in a stage even if you don’t know for certain, or will find certain stages that you have a much easier time handling early rather than late- Sky Temple for an 8th stage is like a nightmare, for me, but an 8th stage Space Jungle level is typically no problem for me. Your mileage may vary with that, however.

What 20XX does well is throw a ton of varied level design with substantial amounts of challenge at you as you progress- stage layouts are all random, and you can find power ups that change how you can approach levels too. Of course, because this is a roguelike, if you die, you have to start over from the beginning. Thankfully, you find nuts scattered all throughout levels which can be used at various shops that pop up at specific intervals to buy things that could heal you, give you a specific weapon or power, even unlock things like a double jump, armor, or boosted speed. Soul chips are acquired from special glowing enemies and persist even after you die, and can be spent on augments or unlock new things for you to find in your next run to give you an edge. 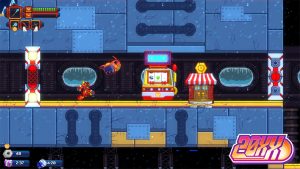 For everything 20XX tries to accomplish- it’s pretty fun. Visually speaking the game isn’t very impressive, looking reminiscent of a Flash game at points, but 20XX is simple enough to understand at a glance which is important considering the sheer volume of activity that can occur onscreen at any given point in time. It also didn’t take long for repeated chunks to pop up fairly often even with only 15 hours of play in the game, but that did give me opportunity to flex my memorization skills. Plus certain power combinations can let you do hilarious things like outright fly by propelling yourself with a minigun pointed downward- it’s a fun time with tons of things to unlock and experience for under $10.

The game is challenging but not insanely so, at least not until the last couple of levels, and gearing up appropriately can help overcome those stages without a huge amount of difficulty. So, if Mega Man roguelike has ever been a thing you have been interested in, 20XX can be an easy recommendation. It may not be the next game you sink 100 hours into, but at $7.50-15 it would be unfair to expect that much at such a price point. 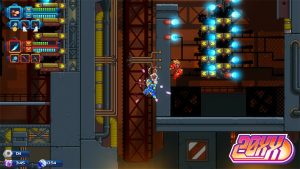 So with that out of the way, it’s probably time to talk about another sci-fi game I sank a silly amount of hours into in the past couple weeks: Star Ocean: First Departure R. Star Ocean is a series that I’ve loved ever since I played the second game on the PSX, but I’m ashamed to say that before now, I’ve never fully beaten the first Star Ocean game. I owned the PSP version of the game, but hadn’t been able to completely make my way through the game. With First Departure R having released on PS4 and Switch, I figured this was the perfect opportunity to jump back into a game series that I loved as a kid but haven’t thought about much in recent years. 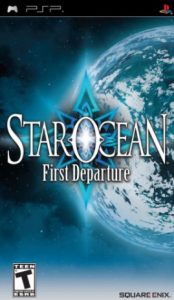 First Departure R is essentially the PSP game Star Ocean: First Departure but in a slightly higher resolution. Characters have been given newer, even better looking character portraits that look amazing but don’t quite match the sprites or the cutscene models (though the animated cutscenes are quite infrequent so that’s no big deal). You follow the tale of the unfortunately named Roddick who lives on an underdeveloped planet that is being accosted by a new sickness that turns people to stone. Roddick meets a young starship captain who assists him in spite of the Prime Directive, and the story basically spirals out from there: A fetch quest turns into a sci-fi adventure romp that was still reasonably enjoyable despite First Departure R’s age, though plot points were sometimes scant.

Where the first Star Ocean really shines, however, is in its characters. Only a few characters can tag along with Roddick at any time, though there are nine party members you can recruit in addition to the story compulsory cast. Some characters have pretty tight recruitment windows, and some are exclusionary (such as, you can’t recruit Ashlay if you recruited Cyruss). This lends well to multiple playthroughs, which is great since First Departure R isn’t an overly long game- taking just 20 or 30 hours. Skits, optional cutscenes of character development, similar to the Tales of series will pop up periodically with party members, and may even require a choice be made that can raise or lower affinity among characters which can affect which of the seven endings you get, as well. 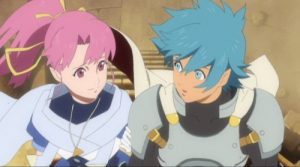 Combat is where Star Ocean stood head and shoulders above its contemporaries, especially back when the first game originally released. Rather than being turn based and require players to choose options from a menu, Star Ocean lets you move around in real time during combat encounters to string together basic attacks and special arts or symbology to control the battlefield. Symbology is basically sci-fi magic, and your symbologists can cast powerful buffs, heals, or attacks given they have the time to do so and you keep them from being interrupted (and if you’re controlling the magic user, be mindful of close enemies earlier in the game).

Proficiencies also return, a system in which using a special art hundreds of times can boost the technique effectiveness. Using a favorite art a lot can increase the damage, reduce casting time, increase the speed of the art, or add extra hits for even more damage, or any combination of these. First Departure R also features skills that can be learned at the player’s choosing, which will boost your primary stats as well as unlock different specialties with all different benefits as well. Item creation is also in the game, with different specialties tied to that, such as crafting new items or using customization to improve weapons you already have with materials you’ve gathered. 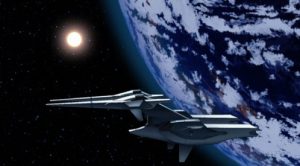 The music of First Departure R holds up pretty well- Motoi Sakuraba composed the soundtrack, and a lot of the battle sounds work quite well. Visually the game looks like an upscaled PSP game. It’s no worse than something like Legend of Heroes: Trails in the Sky, but if you were looking for cutting edge graphics, this isn’t the game for you.

Overall, the first Star Ocean game has held up quite well despite being 24 year old source material. The end game does turn a little bit special art-spammy and the entire game was actually quite easy to beat, but overall it was still a pretty enjoyable experience for an entry in a series I had never yet played through to completion, despite playing through the second and third games multiple times (as well as the fourth and fifth ones once, which was more than enough for those titles). If you want to sink your teeth into an old school action JRPG, Star Ocean: First Departure R is a great place to start.

With that, this week’s Save State comes to its conclusion. Join me in a couple weeks to find out what games my backlog demanded of me to try next. I do as the backlog guides.