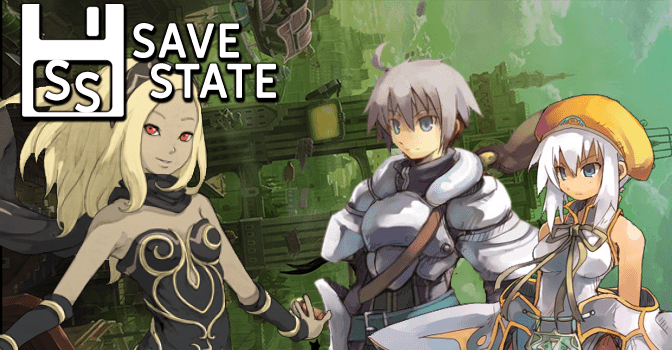 Welcome to Save State, where sometimes we make bad decisions. You see, while cleaning out the back room, I discovered a long lost object that I seemed to have forgotten: My PlayStationTV, a device I purchased back in 2014 for the sole purpose of playing Gravity Rush, Tales of Hearts R, and Persona 4: Golden. Little did I know, a PSTV out of the box couldn’t actually play Gravity Rush, so I played the other two and moved on with my life, eventually placing my PSTV in a box next to my Gameboy Colors, Nintendo DS, etc.. While browsing through the Playstation Store, I realized that Gravity Rush was remastered and ported to the PS4, and I figured this is my chance to finally play my white whale, the one that got away. So come join me on my journey of making my backlog even larger!

Gravity Rush Remastered is an incredibly original, fun, and fast game. You take control of the amnesiac Kat, and manipulate gravity to fly around the landscape, fight monsters, and complete quests for people in the cities. What really makes Gravity Rush stand out is that Kat has the ability to shift gravity however she sees fit- you can use her power to walk on walls, ceilings, or even fly wherever you’d like. The flying controls on the PS4 version of the game are extremely unique, and will likely take quite a while to get used to- Gravity Rush takes place in a third person perspective, and pressing one button will make you float. You can then point the camera by tilting the controller or using the right stick, press the button again, and Kat will ‘fall’ to that location- even if it’s straight up.

By manipulating gravity, you effectively have the ability to fly, but it will take some time for you to combine such mechanics with the combat without getting disoriented. It’s not uncommon, especially early in the game, to be fighting some creatures and be somewhat upside down and have no common point of reference, but as the game goes on you’ll get used to recognizing where Kat is in the 3D space and be able to pull off some really slick looking moves. To complement the unique controls of Gravity Rush, you also have an upgrade system that is powered by the gems you can find throughout the world or obtain as rewards from side missions.

As the game progresses, you’ll be able to gravity shift for a longer period of time, increase Kat’s health, boost your number of kicks in your attack combos, or boost your special abilities like your stasis field and gravity typhoon. Combat is mostly performed, initially, by kicking enemies, picking up objects and launching them, etc., but as you continue through Gravity Rush, you’ll acquire new powers like a micro black hole that you can use to mow down foes. The combat is mostly simple in execution, but finding the right way to damage specific enemies along with the insanely unique way you move around the battlefield completely changes how you approach combat, making it seem extremely inventive.

There’s a good number of things to find in Gravity Rush, and a decently interesting narrative as you trek across multiple cities to combat disturbances and help townsfolk. There’s a large number of side missions, though many of them are a bit repetitive, but there are also time trials and rare monsters to find that give the player trophies, among other things. Gravity Rush Remastered also comes with all of the DLC from the Vita release, so you can acquire some additional costumes and play through some bonus missions to extend the play time a little bit.

Gravity Rush Remastered is a pretty unique experience, and one that I definitely had a great time playing it, especially after having been so excited to play it back some seven years ago. While I didn’t pull an Ahab and let my obsession with Gravity Rush completely destroy me (as evidenced by the fact that I wasn’t even aware it got remastered), I’m glad to have finally played a game that I was so interested in but never had the proper hardware to play since I had no want to soft-mod my PSTV.

That said, while going through my handheld drawer that my old Nintendo DS had a game cartridge still inside it. It was at that moment I realized I never finished a particular DS SRPG called Luminous Arc, and felt there was no time like the present. Luminous Arc is a game that takes place in a fantasy land that’s ruled by the Luminous Church, and you play as Alph, a young orphan effectively raised by the church and trained from a young age to combat witches. You then follow along the story of Alph as he grows his harem of rippling young men and beautiful witches, as you later try to prevent the destruction of the planet itself (the story is JRPG inspired, of course the conflict grows to this).

Luminous Arc takes full inspiration from the giants of the PSX-PS2 turn-based SRPG era- in-battle control is handled very similarly to what you’d expect from something like Tactics Ogre. You place your units, the characters you control during battle, on an isometric map grid, and then choose their actions when their turns arrive. You move your characters, have them attack, heal, use items, or other special actions, then end their turn. You’ll be able to wield powerful martial techniques, magic spells, and even Flash Drive attacks to decimate your foes (yes, the Flash Drives in Luminous Arc are for defeating enemies, not copying illegal song downloads. You know who you are).

When multiple characters have Flash Drives available, and are compatible and friendly with one another, you can execute even powerful Synergy attacks that can yield more FP to use in later Flash Drives. Not every character is compatible with one another, and many are unlocked as part of bonding sequences that occur outside of battle. Similarly, after each battle’s conclusion, Alph will be presented with the choice of speaking to a character who participated in the skirmish. Usually this involves a brief conversation and a choice presented to the player- selecting the right one will increase affection with that character and sometimes even provide you with an item or a special scene between Alph and the chosen character. These extra moments for affection gain are limited, so it’s a good idea to try and provide the best responses possible when you can, since high bonds result in added evasion and hit rate bonuses.

In between each battle chapter, you can talk with your teammates for added world building or affection gain, or visit locations like the shop to buy items, weapons, accessories, and armor. It mostly is bog standard stuff for a strategy RPG during this era. The focus on light novel-style character development after battle and in-between chapters, which each come with tangible rewards, was pretty unique back when the game released, but for the most part it should be easy to sink your teeth into Luminous Arc since it is pretty similar to its accessible contemporaries.

Luminous Arc is a strategy RPG with a story campaign that lasts somewhere between 18-23 hours, so it’s neither too short nor too long. The graphics are quite decent, though they’re basically just what you’d expect from a DS SRPG. The game’s sound design is probably its highest point- the soundtrack has many pieces composed by Yasunori Mitsuda, who also did the compositions for Chrono Cross, Xenogears, Arc Rise Fantasia, and many more. There’s also abundant voice acting, though the DS’s compression doesn’t really do many of the actors and actresses justice (Yuri Lowenthal was all the rage back in 2007, after all).

Luminous Arc is a very competent overall package that mixes SRPG gameplay with light-novel-esque character development in between battles. While the story can be a tad bit predictable, many of the characters are extremely endearing and are, as I believe the kids say nowadays, “Top tier waifus.” It doesn’t take a terribly long time to make your way through, and is enjoyable to play in bite sized segments… at least until the final boss encounter, which may take around an hour depending on your preparation. Beyond that, though, Luminous Arc is a wonderful SRPG that I enjoyed from start to finish, and I was definitely glad to find my copy again after seeing an empty box on a shelf for what feels like a decade.

That’s it for this week’s Save State, see us here in two weeks’ time when I find more treasures in an overcrowded closet that’s slowly turning into an overcrowded back room.