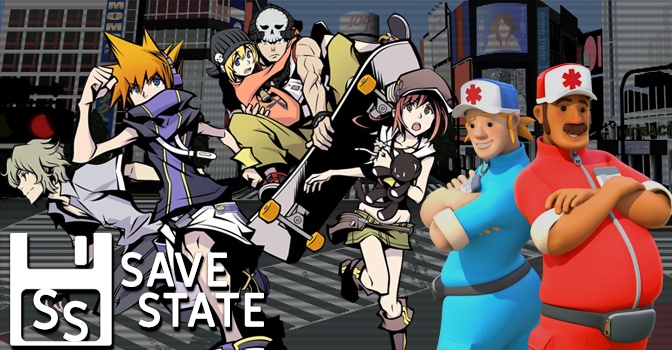 Welcome to Save State, where the backlog is so backbreaking we need to be carried in a stretcher.

Over the last couple weeks, my wife and I have both had days off at the same time, a true rarity. I wound up trying out an interesting cooperative game during that time, giving me a brief respite from my usual time hiding away, playing an extremely long single player game. As a result, the first game I’ll talk about this week is The Stretchers, found on Nintendo Switch. 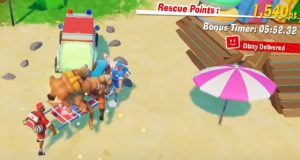 Wacky ragdoll physics and uncooperative chaos are words that describe The Stretchers to a T. Two players each take control of a paramedic, driving around an island in search of people or plants to aid. The most common way to get dizzy people to the hospital is to get them into the ambulance, but the most entertaining part is actually working with your co-op partner to get them there. Each player can grab one end of a stretcher and coordinate around obstacles to expertly move multiple people at once into the ambulance for the highest score possible. More likely, however, one of you will get hit by saw blades or some other kind of object in the way and will wind up knocking one or both of you over, dropping all of the people you needed to rescue into water, and more.

The Stretchers is a cute and quirky little casual game. You’ll largely be using only a few buttons to play and it’s incredibly easy to play with people who rarely play games, or don’t play these kinds of games (meaning: Perfect for spouses and children). My wife regularly plays games, her personal favorite being Dragon Age: Origins, but playing a cooperative game with physics similar to Human: Fall Flat while navigating through a bush maze filled with charging pigs made for a pretty entertaining time. 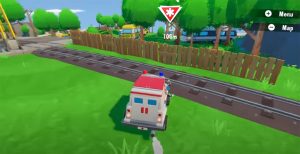 You’re always scored at the end of each level, though the score itself doesn’t have a grade or anything attached to it. You essentially gain more points by doing cool things with the gimmicks in the levels, finding hidden treasures, or placing multiple people into the ambulance at once, and you only really lose points for hitting obstacles. 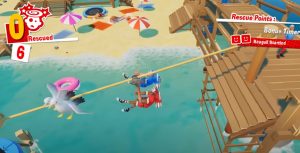 The game itself is very tongue in cheek, regularly breaking the fourth wall. There are also optional items to find like collectible hats that your paramedic characters can wear. You also drive to which mission you’d like to partake, so there’s a bit of an open world aspect to The Stretchers, though the game’s world isn’t exactly huge. This is a simple co-op puzzler with silly physics, a quirky story, and enough different set pieces and objectives to keep you interested up until the end. You, of course, can play it solo, but where’s the fun in that? It’s always better to make someone else suffer with you as you push them onto a trampoline to bounce uncontrollably across the environment!

Of course, The Stretchers wasn’t the only game I played in the last two weeks. I also had time alone. When no one was around. You know, so I could do horrible, unspeakable, absolutely unforgivable things. 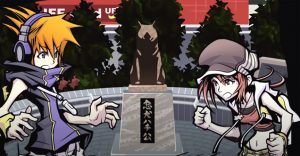 Like play The World Ends With You Final Remix on my Switch. If you know anything about The World Ends With You, it’s a game with intensely catchy music, an elaborate story with multiple twists and mysteries, great art direction, and most of all, stellar game play. This game originally released on the Nintendo DS, requiring players use both the stylus and the buttons of the system simultaneously. The DS version of the game utilized both screens in ways that games did not commonly do- players would control the main protagonist Neku on the bottom screen, using your equipped pins (weapons, essentially) to do specific motions with the DS stylus to attack.

While also controlling Neku, players would have to attack and defend with Neku’s partner on the top screen, using the buttons on the DS to do their character actions- one partner, for example, requires you press directions to do math on the top screen while dodging and attacking as Neku using a stylus on the lower screen. This mind-melting control scheme was difficult to pick up, especially considering Neku changes partners several times over the course of the story, and each has their own unique way to attack.

In both versions of the game, players will acquire various pins and clothing with special effects on them as they progress through the game. The pins are essentially your attacks- with some being shots you’ll activate by tapping an enemy, some requiring you press and hold on an enemy or an open space, some will require you draw lines or slash through your character. There’s a load of variety to the huge number of attacks in the game, all of which are branded by different in-game companies and grouped into over 50 types. Each pin can also be leveled up, which improves how much you can use them before they enter cooldown, raises damage, or can even evolve the pins into entirely new ones with different properties. To add to the complexity and customizability of the combat system, you can reduce your level at almost any time to increase your drop rate, so it can be great fun to run through the game at level 1 to maintain the highest chance of getting new pins. 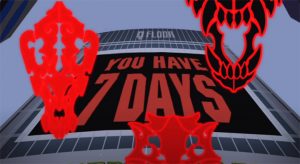 The Nintendo Switch version of The World Ends With You differs from the DS version due to how fundamentally different it is to control Neku in combat. The Switch very clearly does not have two screens- so to get around this, you can play in two ways in the Remix version. Handheld mode lets you use your finger or an appropriate stylus to control Neku and utilize the swipes or presses needed to handle his pin-weapons. You can also play docked, which will have you hold your joy con steady to move Neku, or activate your pins using different motions. Some pins are easier/simpler to learn how to use handheld, and vice-versa. The pointer control scheme works pretty well, but your partner in both modes has largely been reduced to just a singular pin you have access to, so doing that one specific action- so with the first partner, you activate her by tapping an enemy. You basically have no control over the partners in this version, which reduces them to a one-trick pony and was kind of disappointing, not going to lie. 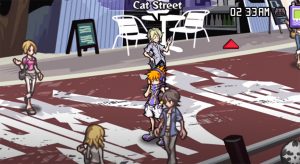 To the Remix’s credit, a cooperative mode was also included. “But Vincent,” I hear you saying. “I thought you played this game alone!” That’s correct, I did. Co-op mode for this game requires each player use their own separate joy cons to play, and the partners then get multiple pins with which they can attack- a stark difference from playing the game normally. I actually played the game with one joy con in each hand, and quickly learned to coordinate moving the cursors to overlap so I could quickly dispatch enemies and deal big chained damage using both Neku’s and the partner’s pins at the same time- this made combat substantively more difficult, but considerably more rewarding. 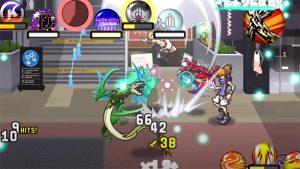 I basically returned to the game after a long break to complete the optional super boss of the game, as well as complete the A New Day, which serves as both the epilogue as the game and a hopeful connecting thread for a sequel. Battling the Noise enemies throughout Shibuya using two joy cons was immensely fun, and after a time I found myself being able to easily use slash and press pins in sequence while coordinating my left hand to do whatever motions were needed to activate a partner’s attack on the same target so I could deal huge damage in combos and score rare gear with ease even while at level 1 vs late game enemies (and some pins are so rare that you’ll need to lower your level or do chain battles on higher difficulties in order to even have a chance at them!). 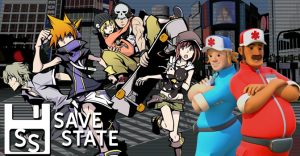 Solo co-op may not be the intended way to play the game, but it absolutely is the most fun I had with The World Ends With You, which should say something as I both own and played the DS version some twelve years ago. Of course, the DS version plays like a completely different game, and both versions have their positives and negatives. I would say you couldn’t go wrong trying either one, as each version of The World Ends With You should be reasonably cheap, and both are incredible experiences assuming you overcome the initial learning curve. There’s also some kind of new animation coming out involving The World Ends With You, which may be revealed at Anime Expo Lite at the beginning of next month. While an animation of some kind is always interesting, the source material is always better… right?

The World Ends With You is a great story of a need to protect yourself via isolation, which I sorely needed after my wife pushed me into saw blades repeatedly while playing The Stretchers. Join us a couple weeks from now when I might rope my wife into another silly co-op game to test her patience!