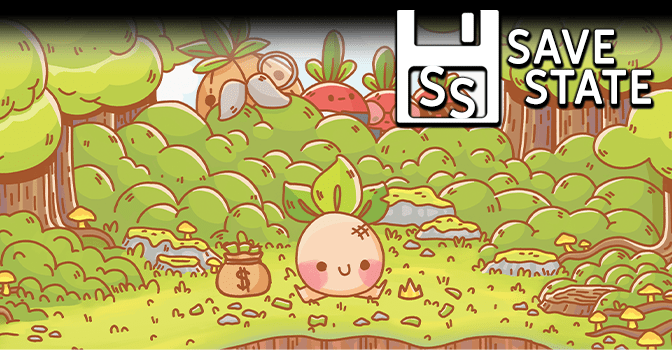 Welcome to Save State, where we apparently don’t pay our taxes. In the last few weeks, it came to my attention that my wife and I paid entirely too little in taxes for the year of 2021, but thankfully the debt collector wasn’t a giant onion. Due to this unfortunate news, I elected to play a game to take my mind off things- Turnip Boy Commits Tax Evasion. It’s always nice to play a title that lets us play out our wildest fantasies, after all. 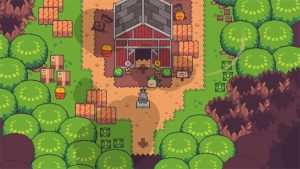 The first thing you need to know about Turnip Boy Commits Tax Evasion is that it is really cute. It is adorable to almost a saccharin degree, as all the little vegetable characters bob up and down and tell you their humorous dialogue. The next thing you need to know is that the game is pretty funny, and it features things like an acorn crawling from primordial goop and its first and most fervent desire is to own property. There will be more than one occasion where Turnip Boy will make you crack a smile. The final thing you need to know is that this is a simple top-down style adventure game, similar to the first Zeldas, with simplistic combat as you venture through locations and backtrack to complete side quests. 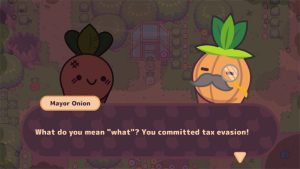 You’ll complete a variety of fetch quests for the slave-driving Mayor Onion, help out various vegetable and fruit characters in the world, and possibly tear up their important government documents. The combat controls are simple, perhaps overly so, since largely you will only use a plant sword or shovel to defeat your enemies, or use a watering can to solve puzzles… and also defeat enemies. Strangely, you have to switch from the sword to the watering can using the shoulder buttons, when those buttons could have just been used to let you use the watering can or your third item without having to switch, but it’s probably due to the game’s emulation of Zelda: Link’s Awakening that they chose this approach. 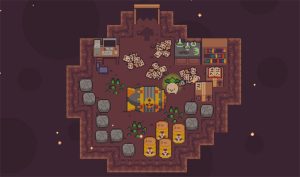 Turnip Boy’s sheer disregard for others and rampant referential humor really helps keep you invested because you just wonder how things are going to escalate next. While Turnip Boy starts off with funny non-sequiturs and references to things like Jojo’s Bizarre Adventure, the story itself transforms into something wildly different by the end of the game’s 2-3 hour run time. The boss battles, in Zelda-inspired fashion, are like little puzzles you need to solve, sometimes by using bombs or setting yourself on fire. 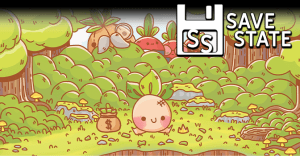 The puzzles and the humor are absolutely where it’s at in Turnip Boy, and thankfully when it comes to that, this title knocks it out of the park. Combat mostly involves getting in range at the appropriate times and hitting a button, but the puzzles themselves can be pretty inventive. Some puzzles will make use of bombs, fire, and even portals to transport the bombs you grow with your watering can. What, you don’t grow your bombs? Weakness disgusts me. 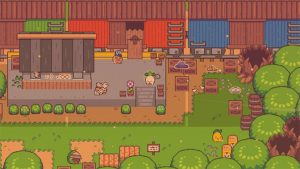 As you explore and complete tasks for the various fruit and vegetable characters that inhabit Turnip Boy’s world, you’ll unlock trinkets, documents to rip up, and a bunch of special hats that you can wear. You can also find and grow additional heart containers that can make Turnip Boy stronger as well, which can be handy if you’re having difficulty not getting hit.  This title does offer some accessibility options that allows players to increase their damage and even turn on a God Mode toggle. 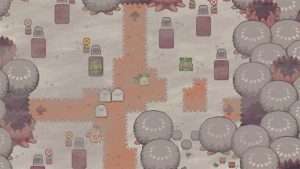 Turnip Boy Commits Tax Evasion isn’t overly difficult, but it’s nice that there are options present for those who would prefer to play in a mode that increases damage. While the title itself is pretty brief, clocking in a complete run with all achievements is maybe 2-3 hours, it’s a fun and entertaining little game that might let you live out your wildest fantasies, whether you aspire to become radioactive, or just wish you didn’t owe several thousands of dollars to the US government. Sigh. There’s also a fun little endless roguelite mode you can play once clearing the title, that offers tons more hats for Turnip Boy to wear, should you really be into that kind of thing.

That being said, we’re going to bring this edition of Save State to a quick close, because I have to work hard for the money, I work hard for it, honey. While I may not be treating you right this week, I can assure you that Turnip Boy Commits Tax Evasion will… so long as you don’t let him hold any of your paperwork. He will rip it up. That’s kind of his thing. See you in a couple weeks!