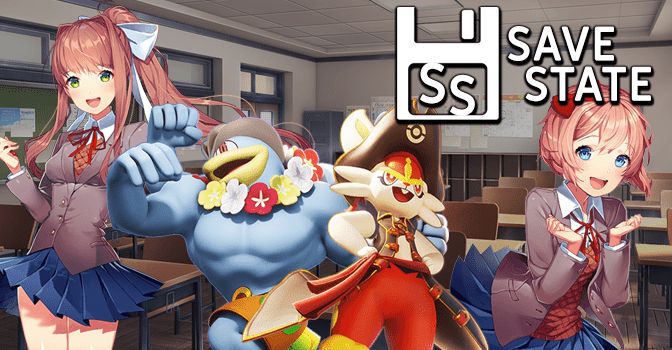 Pokemon Unite released a Japanese beta in the last couple weeks, and anyone with a Japanese Nintendo account could give it a whirl. Being an adamant Pokemon fan, but also horribly inept with the Japanese language, I navigated the eShop, downloaded the beta, and played it for several hours, and I have to say- it’s actually quite good.

For those who have never played a MOBA like League of Legends or Heroes of the Storm, Pokemon Unite is a game where you select a character, you collect Pokeballs from defeated Pokemon and deposit them into goals to bank the points (conversely, getting knocked out will lose you points). Once a goal is full of points, you can move to the next goal down the lane, and while pushing a lane you get boosted movement speed and your opponents get their movement speed reduced. This sounds like a simplistic change, given that in other MOBAs the goals are actually turrets that shoot at players and need destroyed, but all of the changes in Unite work toward making a faster, more fluid experience; especially useful since matches only last ten minutes. At the end of ten minutes, whichever team banked the most points is the winner.

I have very little experience with League of Legends, having played it for all of a week when Irelia first released, but I have played a sizable amount of Defense of the Ancients back when it was a Warcraft III mod, and I was extremely concerned with how Pokemon Unite would control since Arena of Valor uses the analog stick like a mouse cursor for movement and targeting, which I found to be less than ideal. I was pleasantly surprised to discover that Pokemon Unite is intuitive to control- simple analog movement, basic attack tied to the face buttons, and skills attached to the shoulder buttons which can be aimed by using the right analog stick. Movement in Pokemon Unite is both simple and satisfying, and navigating the battlefield with your chosen Pokemon will be easy enough for those unfamiliar with the genre. Activating and aiming your skills or ultimate attack is easy- which is great, especially when getting mobbed by Snorlax and Garchomp while you’re trying to knock out a Zapdos for bonus points. 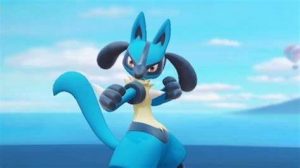 Speaking of chosen Pokemon, Unite has a large number of characters that can be selected. Fan favorites like Greninja, Lucario, Pikachu, and Charizard are available, but players can also choose from fun Pokemon like Edelgoss, Mr. Mime, Wigglytuff, and Crustle. Different Pokemon have different niches- Crustle, for example, can set up a wall of rocks for a brief time to prevent hurt opponents from escaping or to help yourself escape from pursuers. Mr. Mime has a similar ability with psychic barriers that it can pop up, but other Pokemon like Cinderace have high attack power to compensate for them having next to no crowd control capabilities at all.

Each Pokemon in Unite starts at level 1 with two normal skills and an ultimate attack, but as you raise your level by defeating wild Pokemon in small jungle areas, like in other MOBA games, you raise your level and will be able to choose different skills, with many of them also becoming more effective the higher the level you reach. Evolution also plays a role in leveling- you start as Bulbasaur and level your way to a powerful Venusaur. Players can also get and use held items that you can upgrade with acquired in-game currency, which function like runes or perks in other games, so there’s a sense of progression, as well. 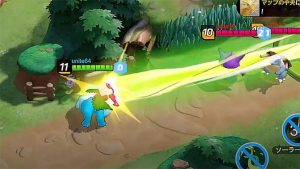 All in all, Pokemon Unite was a very fun beta experience, certainly more interesting than I thought it would be, going in. The game is free to play, which is almost always a detriment, and there are already a variety of costumes for the various Pokemon which makes me hope that the purchasable items are purely cosmetic- though it is really cute to see a pirate Cinderace, or beach Venusaur. I very much look forward to Pokemon Unite releasing worldwide so I can read the in-game text and probably lament the monetization, but for right now, this is probably the most fun I’ve ever had playing a MOBA.

For the next game we’ll talk about this week, I decided I needed a more calm game to relax after intense matches of Pokemon Unite, so I picked up a random visual novel. All right, so maybe the matches weren’t that intense, but I did play a visual novel to unwind. Doki Doki Literature Club Plus released at the end of June, and all of my friends recommended I play it while snickering to one another, for some reason. I started up what seemed to be a perfectly normal visual novel: You begin the game joining your childhood friend’s literature club, where you can experience perfectly normal school days with a book worm, a midget, and a robot. Well, that’s probably disingenuous, but in Doki Doki, you’ll mostly be spending your time getting to know the four main heroines and writing poems using keywords that make them happiest. 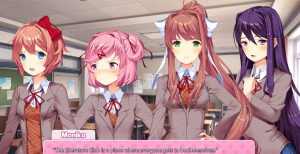 There are choices to be made by the player as you progress the story, though which ones you pick largely determine what CG images you may be presented with as you progress through the game. Getting one girl to like you over another by choosing the right words during the poem sections can shift you to her route, where you’ll experience more scenes with that particular character. It is worth noting, though, that due to some of the content of Doki Doki Literature Club, the game is rated M for mature, I would imagine this to be due to the fact that during the game one of the heroines steals your pen, and pen theft is a very serious crime (also likely due to another event that occurs with that character later, which was an extremely cutting meta-commentary on modern visual novels).

The visuals of Doki Doki Literature Club, especially for its free version, are superb given that it was made by such a small team. The soundtrack of the game really enhances the experience, especially in the second half where the music will shift in pitch or tempo in order to increase how believable the scene is. Really, it’s one of those things you’d need to experience for yourself, because otherwise, this is just a perfectly normal visual novel. Around halfway through the game, things do change a little bit, but you’ve just got to hang in there- it only gets better. 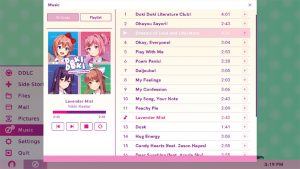 There are some interesting twists and turns throughout the story- the childhood friend leaves around halfway through and was very unexpected, though my copy of the game seemed to have suffered from a lot of audio/visual bugs that I just couldn’t quite get rid of. Tampering with the game’s files made things more bearable, though, and afterwards it was nice to see my favorite girl swoop in and save the day at the end. Normally, I wouldn’t list spoilers, but really it is a story you’d have to play, yourself, to fully understand how great all of the girls are. You’ll laugh, you’ll cry, you’ll wonder how Natsuki made such delicious cupcakes with such tiny hands. Truly, the story runs the full gamut. 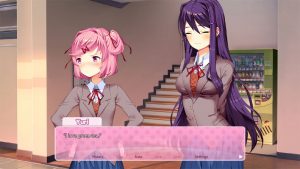 The Plus version of Doki Doki Literature Club has a variety of side stories that further enhance the characterizations of the different heroines, though this side content is excruciatingly normal in comparison to the main game’s story, which is merely perfectly normal. The side stories all take place before the main game, proper, and are actually quite touching and no doubt would be loved by fans of the original Doki Doki Literature Club. 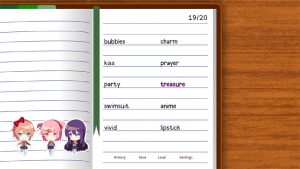 That being said, if you’re even remotely a fan of visual novels, you should definitely check out Doki Doki Literature Club Plus. You don’t need to Google anything about it, first: It’s only $15 to play it on the Nintendo eShop, though it is a game for more mature players out there. Also, everything I said above was nonsense because I don’t want to give anything away, but I do highly recommend anyone who can appreciate visual novels to try Doki Doki Literature Club.

With that said, we’ll consider this Save State saved and closed, so join us in another couple weeks where I inform you of some random games of which you may not otherwise had been aware. Until next time!