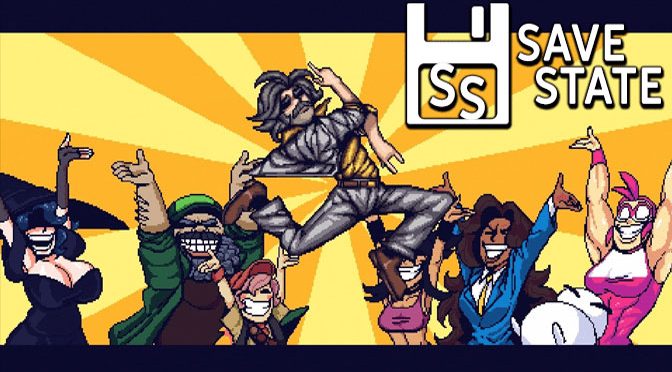 Welcome to Save State, where it’s show and tell and I’ve brought yet another indie roguelike to class. Some people refer to roguelikes like they’re the video game equivalent of a root canal- immense pain before a sudden wash of relief. I figured since I went to my dentist and had two teeth crowned, I might as well talk about the roguelike experience I’ve had for the last couple weeks just to round everything out. So, strap yourselves in, because over the last couple weeks before Elden Ring’s release, I found a roguelike that’s less of a root canal, and more of a 3/4ths crown. 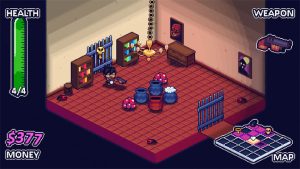 Dead Estate is a game that released just a week or two before last Halloween, and it combines many of the best elements from a variety of roguelike titles to present a game experience that feels familiar, but still has a number of its own elements to keep the player engaged. While at first, Dead Estate might simply look like a fan service game due to one character having large… tracts of land, there’s actually a sizable roguelike experience if you can look past that. Dead Estate is an isometric roguelike that’s pretty heavily based on the player using quick reaction speed and judgment to determine when to jump, shoot, and handle the various monster mobs that will accost you while you explore the rooms of the mansion. 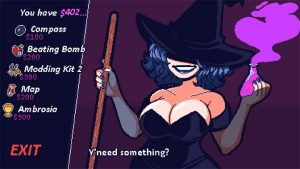 Dead Estate isn’t anything new- it’s very similar to games like Enter the Gungeon and Binding of Isaac. Most enemies will mindlessly chase you through the rooms, but most enemies and traps are fast enough that you’ll need to quickly prioritize what to shoot and when to jump to avoid taking damage. There are items that provide a bunch of various benefits, a ton of different weapons, and eight characters for you to use to clear the game and achieve the true ending. 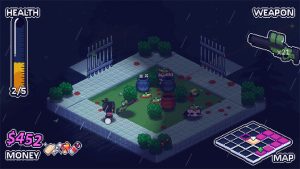 In Dead Estate, you explore numerous floors of a monster-filled mansion, blowing away any zombies and eldritch horrors you find, dodging traps, and avoiding a giant, mutant rat named Chunks who chases you like Nemesis from Resident Evil 3. As you clear rooms, you’ll find varieties of weapons and items that can make your character better (or worse, if the item ruins a synergy you have going), and the weapon variety definitely helps keep such a fast-paced game feeling fresh.

Progression in Dead Estate is very similar to The Binding of Isaac, since you go from randomized room to randomized room until you eventually encounter a boss, and clearing a run has a good chance of unlocking a new playable character for you to use. 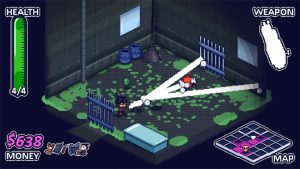 The sorceress Cordelia, a character who is effectively Dead Estate’s mascot, shopkeeper, and main driver of plot (in more than one way), can be found in rooms throughout each of your runs and sell you items that prove to be invaluable the further you get into the mad scientist’s estate. The story itself is kind of an excuse for the game to happen, but the story of Cordelia and her family (and the science experiments within the mansion) is actually pretty fun, and you unlock Cordelia for use pretty early on. She can float above traps like Princess Toadstool in Super Mario Bros 2 which can be pretty useful in a lot of rooms, but each unlockable character has some kind of special benefit like this that you can utilize. 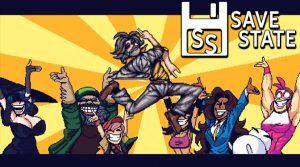 To make your way through the estate, you can use everything from the horror classic chainsaws and shotguns to clear out the creatures in the estate, but you can also bop foes with a paddleball or a bazooka, so there’s some decent variety among the gun-melee-throwable triangle in Dead Estate. The items can have basic uses, such as increasing the damage for machine guns or explosives, but you can also stumble across items that regenerate ammo, damage all enemies when you take damage, or make killed monsters damage other enemies when they die. Finding which items work best for your character and how you play can be pretty important, though there is something to be said about just jumping around a room and shotgunning until things stop moving. 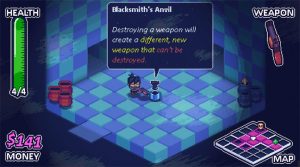 For your starting characters, you have a nimble girl with low health and a shotgun, and a slower fellow with only a handgun but substantially more health. There are a number of unlockable characters each with their own strengths and weaknesses, and maximizing their strengths is the best way to fully explore the mansion and its many basements. There are a number of additional characters to unlock, each with their own unique unlock conditions and traits: Finishing a run with 12 or more health unlocks a masked wrestler who can dash and punch enemies into bits, for example. 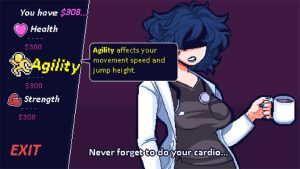 Due to the simpler chasing nature of enemy AI, players of Dead Estate should find themselves getting acclimated to how the game plays pretty quickly. The bright visuals and art design coupled with an excellent soundtrack all fit the theme of the game, and even the more nightmarish enemy designs work well in the game’s cheery pixel presentation. There’s quite a bit of humor in Dead Estate, as well, which adds a considerable amount to the game’s charm, despite it not having the endless replayability of games like Binding of Isaac, though Dead Estate will give you 30-40 hours of enjoyment out of $15, which is by no means bad at all.

With Elden Ring on the horizon, though, we’ll bring this week’s Save State to a close, hopefully letting more people know about a little indie gem from last year. A bit abrupt, but this should give me time to ice my jaw after visiting my dentist this morning. As with everything, stay healthy, and remember to save your work!