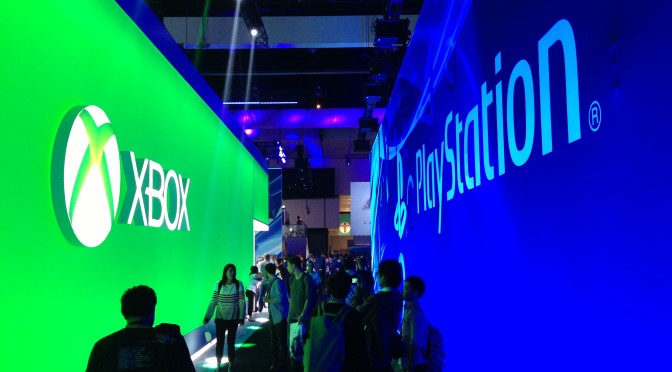 Sony, Why U No Cross Play?

In previous console generations, I’m sure there were those who wondered what it would have been like to play someone from a rival console. Imagine how it would have been like for me to load up Super Street Fighter II on my Sega Genesis against a friend of mine who would be on his Super Nintendo. I know there are going to be those who will call me out for using these two systems, but they did have something in common. There was a service called XBAND that used a 2400 baud modem to connect a Genesis or Super Nintendo to their service and play online. Granted it didn’t allow cross play between systems, but it was the start of their online services.

We wouldn’t have anything similar to it until the Dreamcast, a system that included a 56K modem, with an optional broadband modem available. The original PlayStation had plans for a serial modem, but they never were released. But in the next generation online play really took off with the broadband only Xbox and its Xbox Live network. Sony would eventually get online capability of its own with a network adapter for the PlayStation 2 that was bundled with Final Fantasy XII and a 40 GB hard drive. Granted the PS2 Network Adapter really didn’t take off that well, but it was a start of online gaming.

Then we come to the Xbox 360 and PS3, both of which supported broadband connections, and with them we started to see both systems have the same games playing online. People wondered at the time if both the 360 and the PS3 would allow cross play with each other, but at the time, it was Microsoft who denied it.

But now it’s 2018. We now live in an era of 200Mbps cable/fiber optic internet, 4K gaming and social network integration. It would be the perfect time to have the systems co-exist and allow Xbox One and PS4 gamers to go up against each other, and while at it, have PC and Switch gamers play as well. We first saw it with Rocket League which allowed only PS4 and PC cross play gaming, but Xbox owners were left out. Last summer at E3, we saw that Minecraft got the same treatment, where players on Xbox, PC, and even Nintendo Switch are able to play along well with each other. Rocket League on Xbox followed up with the same formula. But PS4 is nowhere to be found. Since then everyone has been asking why everyone can’t just get together.

I too asked that as well. As someone who warmed up to cross platform purchases via Xbox Play Anywhere, and cross saving of games, why not let us cross play as well? Over time I found it was not “greedy Microsoft” as everyone wants to say it is, but it was actually Sony who is shooting down cross play. In an interview with Eurogamer last July, Jim Ryan of Sony responded with this:

Yeah. We’ve got to be mindful of our responsibility to our install base. Minecraft – the demographic playing that, you know as well as I do, it’s all ages but it’s also very young. We have a contract with the people who go online with us, that we look after them and they are within the PlayStation curated universe. Exposing what in many cases are children to external influences we have no ability to manage or look after, it’s something we have to think about very carefully.

I’m sorry Jim, but that sounds like a sad excuse to me. I know that the Xbox Live community can be, let’s just say it, a bit toxic. But in the end so is the PC gaming community that you are embracing. It’s not just Xbox that is doing this, so why leave them out of it. Is it because you want to keep your console lead at the expense of giving more options that Microsoft is giving to their customers? It’s not bad enough you deny true backwards compatibility in favor of having PS4 gamers rebuy PS4 compatible versions of your games, and why you don’t support services such as EA Access or even offer a Game Preview program. Now you won’t allow us to play each other?

And again, who is really #4ThePlayers?

Thankfully I’m not the only one calling out Sony about it. Last week Epic announced that the latest update for Fortnite would support cross play. But once again, the Xbox One version would not allow PS4 cross play and vice versa, but they do allow it with PC and even mobile. On Twitter, a post was made to Phil Spencer:

@XboxP3 hi. I wanted to ask that can XB1 and PS4 players play together in Fortnite? We really want cross-play system between XB1 and PS4 :/

To which, Phil responded with “Me 2.” And even Epic responded with “We 3.” So yes, even Epic wants it, so why must you deny it, Sony? Are you really “4ThePlayers” like you say you are, or is it really Microsoft that is for the players?

I’m starting to think it’s the other way around.