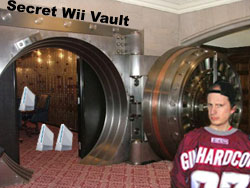 Ok, I own a Wii. I was lucky enough to find one back in April of 2007, when I happened to have enough money with me to buy it. Nonetheless, when I picked up the Wii, I had to ask the store rep whether or not it was a legit box. After all, we've seen boxes that were filled with phonebooks to make them feel legit.

And since Nintendo did not want to do anything about the shortages, I was very skeptical until I opened the package and there was an actual Wii inside looking back at me. It was not a phonebook or one of those cheap Vii ripoffs either, but an official Nintendo Wii that seems impossible to find.

But still, that's over a year ago. Here we are, it's June 2008 and Wiis are still hard to come by. Everywhere I go they are not on the store shelves, and when some retailers, namely Best Buy, get them in, they decide the best thing to do is hoard them until Sunday so they can draw a crowd.

It is not fair for someone who comes in with cash ready to purchase a Wii, only to have a blue shirt say they are not selling them until Sunday, thereby forcing you to get up early on Sunday, having to bear a mob of greedy customers, and end up getting screwed over in the end. Been there, done that!

And to think when both the Wii and PlayStation 3 were released almost at the same time, we all thought it would be the PlayStation 3 that was near impossible to find. Oh how times have changed.

But almost two years after the launch for Wiis to still be hard to find is just inexcusable. I just do not understand why it is so difficult for Nintendo to get more of them ready to be shipped to the stores.

Last winter when I gave my Dumbass of the Year award, I nearly gave it to Reggie Fils-Aime for this exact reason. (The award actually went to Jack Tretton of Sony for his $1,200 comment.)

But with the Wii shortages continuing this day, I am actually considering Reggie as a strong candidate for this year's dubious honor as well.

But it's not just the lack of Wiis that are the sole criteria.
Wii Fit came out last month, but if you check the stores, I'm sure you'd call me a liar.

Just like the Wii, no one has them, and I'm sure Best Buy is going to hoard them just like they do the Wii. Even worse, I'm sure that retailers are going to force BUNDLES on those who want a Wii Fit. And forcing people to buy both a Wii and Wii Fit will easily screw those who already own a Wii. Then again, with the shortages, maybe they can resell the unopened Wii for a profit.

And speaking of profits, the Fit is going for upwards of $150 on eBay, which is way above the $90 retail that we would pay if Nintendo actually decided to get more units in stores.

However, they feel that American gamers are not worthy of their product because Nintendo saw it appropriate to only ship 500,000 units. Meanwhile in Europe, they shipped two million! Why did they get more? Analysts say it's because of the struggling US Dollar, but I know there are those who will do anything to get a Wii Fit. Come on, we are so much fatter here in the US! We need it more! So why hold it up? What's the deal Reggie?

I think I know your deal. Nintendo's biggest fear is that the novelty of the Wii and its unique control scheme is short lived. After the experience of Wii Sports, and eventually Wii Fit is over, what's left? Sure there are some very impressive first party titles, (Brawl, Mario Galaxy, and Twilight Princess come to mind.) And Virtual Console is a good legal method to play some 16 and 64-bit classics, plus the GameCube compatibility is near perfect. But after that what is really left?

Third party games, with the exception of No More Heroes and Zack & Wiki, are downright horrible. In addition, the average aggregate scores of all Wii titles are significantly lower than the scores of the 360 and PS3 games. After more people find out about the lower quality titles, and realize the novelty is short lived, the sales will slow down, and that hurts Nintendo in the long run.

So what is their answer? Limit shipments as much as they can, both with the console and with Wii Fit, and keep the demand going.

But when you think of it, that's a bad business decision. If you got such a hot product, whether or not it has a short novelty value, wouldn't you want to get more of your product to the stores, increase sales, and rake in the profits? That's what puzzles me the most. I'd like to know what Reggie is thinking about all this, and for someone who is supposed to be a cult figure to hardcore gamers, I'm sure he'd want to do what he can to appease them.

If I were him, the first thing I would do is to make sure stores are stocked almost on a daily basis. Then insist they don't hoard product. That way anyone can walk into a store and pick up a Wii. That will keep your customer base happy.

Let's see what is done about this, but in the meantime, what's with the hold up? Your public awaits your reply.