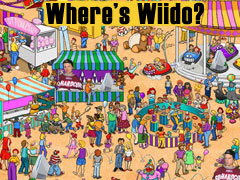 I just don't get it. Aren't we passed the holiday season yet?

I know that when a new console is debuted before the holidays, it sells out until Christmas, and then once the holiday is over it is available everywhere. We saw it all the way back with the Nintendo 64, and I still remember how someone offered me nearly a grand to buy mine, but I was stupid enough to turn down the offer.

And then of course the PlayStation2 insanity, including mobs of anxious buyers in a Paris store. We went through it again with the Xbox 360 last year, but once the holiday was over, the units were available to the masses. And yes this year it is happened again.

Nope, they can be found in stores! It's Nintendo's Wii that I can't find anymore, and go figure that I was going to use my tax refund to purchase one!

It doesn't make sense to me. I thought it was supposed to be the other way around. After all, the Wii is based on currently existing technology. It is running on DVD-ROM based media, the graphics are slightly above that which you might see on the GameCube, and aside from the innovative controller (which itself can also be considered current technology) there is not much special.

Meanwhile we have the PlayStation3 which is using Blu-Ray technology as its Trojan Horse. It is that same Trojan Horse that should be causing the limited supplies due to a shortage of the Blu-Ray diodes, and as a result I thought it was going to be the PlayStation3 that would have all the shortages.

The stories of PS3 launch related crimes, as well as the majority of systems that ended up being resold on eBay, could be a sure sign that the PS3 is selling out, right?

Apparently not. The exact opposite is occurring. No one wants the PlayStation3. A few weeks ago I went to a local Best Buy and there were about 15 60 GB PlayStation3s ready to be sold. As for Wiis, none at all. In fact I haven't even seen a Wii even prior to the launch.

Then again look at what Nintendo has to offer. They have a unique gaming experience with the Wii, and for only $250, which in today's console market is a steal. That's why it's selling out all over the place. In fact a store I went to today said they got 3 new Wiis in, and sold out in minutes.

But even with simplistic technology, I don't see how it is that Nintendo is not making more Wiis available to the massages. Do they want to have people resell them on eBay as well?

Come on Nintendo, get off your lazy butts and make more Wiis. You're only hurting yourself and leaving a hungry crowd waiting, including me.

Oh well, if they don't get them out in time, I can always use my tax return to buy a new LCD HDTV"

Waiting For: MLB 2k7 (If they fix the Freeze Bug)