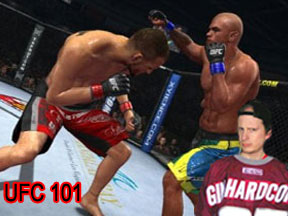 But my how times changed. The UFC is now owned by another company (Zuffa, LLC as opposed to Semaphore Entertainment Group) is now sanctioned by unified MMA rules and is now visible everywhere: not just on pay-per-view, but also on network television (via Spike and Versus) as well as a popular reality television series, and the Undisputed game series published by THQ.

Of course when something becomes popular, the competition starts to heat up. An early competitor was Pride Fighting Championships, based out of Japan. Pride even went as far as releasing their own game for the PlayStation 2. Ironically it was also published by THQ.

But what came of Pride? It was eventually purchased by Zuffa in 2007, and many of its fighters came to the UFC label. The next major competitor came in the form of Elite XC, a rival promotion that broadcast events both on Showtime and CBS. While it was not purchased by the UFC, it did end up the subject of controversy in itself, centering around their main eventer, Kimbo Slice.

Slice was involved with two controversial fights. The first incident occurred against James Thompson, a fighter who was dominating the match, but had an Achilles’ heel, in his case, a cauliflower ear. Slice struck it cleanly and the referee instantly stopped the fight. An incident referred to as a travesty by, who else? That’s right, rival UFC President Dana White.

But the second incident would eventually lead to XC’s bankruptcy and downfall. Slice was to fight former UFC fighter Ken Shamrock, but Shamrock had to withdraw due to an eye cut. In his place was Seth Petruzelli, who knocked Slice out in 14 seconds. However during a radio show, Petruzelli said that EliteXC told him to not use specific moves to protect Slice. Despite eventually being found with no wrongdoing, the damage was done and EliteXC folded.

On a side note, Slice ends up for a short time in the UFC, starring in the Ultimate Fighter season 10 and eventually fought in the finale, which was a unanimous decision, and one poor showing at a pay-per-view.

But both CBS and Showtime found another promotion to back up in the form of Strikeforce. It was also at this time that EA Sports announced they would be publishing EA Sports MMA, an announcement that infuriated Dana White, who said that EA Sports told him that MMA is not a serious sport and spoke out against the game, even going as far as blacklisting fighters who appeared in the title from competing in the UFC. He has since retracted his comments, as the best-known as EA Sports MMA co-cover athlete Randy "The Natural" Couture still competes in the Octagon.

To cement their foothold in the MMA video game genre, EA Sports selected Strikeforce as the premier league for their game. So it looks like there would be tough competition between THQ’s UFC Undisputed and EA Sports’ MMA series, right?

Uhhh….maybe not. Last Saturday, Dana White announced that Zuffa had purchased Strikeforce, but unlike previous acquisitions that were eventually integrated into the UFC (including Pride, the World Fighting Alliance, and World Extreme Cagefighting,) that Strikeforce will continue to run as an independent production.

Still, this has to make me wonder about the game side of this announcement. After all, Dana went to EA about making a UFC based game. They claim MMA is not a sport and deny him. He goes to THQ and Undisputed is a runaway hit. Afterwards, EA sees the money and announces EA Sports MMA and adds Strikeforce to the mix. Now Dana White owns Strikeforce.

While there is no announcement of a UFC Undisputed 2011 yet, nor an announcement of EA Sports MMA 2, what will this mean for the latter? Will they have to look for another US based MMA promotion for their highlighter, such as Bellator or King of the Cage?

Will Strikeforce be added as a minor league promotion in the next Undisputed (similar to the WFA?) Or will Dana be able to make a deal with EA and receive income for TWO MMA games from separate publishers?

Forget a Brock Lesnar/Cain Velasquez rematch! Give me EA vs. THQ Round 2 with Dana White as one of the judges!