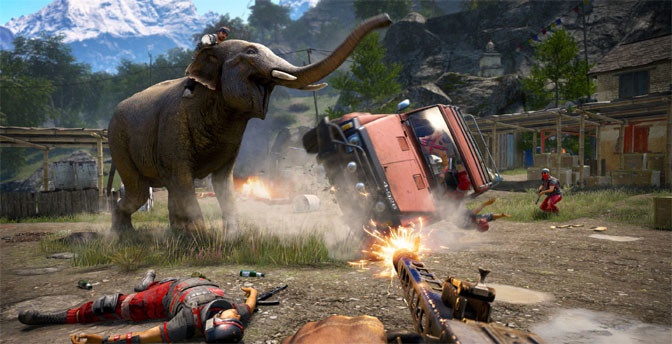 Ok, you all knew this was coming…

Your picks for our annual Game of the Year awards were announced, which you can read here, and my fellow colleagues did a recent GiN Lounge episode discussing the results. Now it’s my turn to take on what you all think of which games deserved such honors last year.

Before we get started I will need to mention again, that I am basing my take on these awards based on the games that I HAVE PLAYED LAST YEAR. As a result there will be some titles or platforms that I will not be able to provide my opinion on them. For those I will say that is the cause. Anyway, let’s begin.

First off, let me mention about Far Cry 4 getting four awards last year. I do not agree with them at all. Don’t get me wrong, Far Cry 4 is an amazing game, but the way I see it, Far Cry 4 just felt more like Far Cry 3.5 with a new Himalayans setting, it didn’t wow me as much as Far Cry 3 did. Also the categories it won for just don’t fit for me. Adventure game? Maybe, though I have other great games such as Sunset Overdrive or Middle Earth: Shadow of Mordor that could easily have walked away with the title. Shooter? I know many other shooters that were better than it, even if in the traditional shooter sense (i.e. Wolfenstein: The New Order.) As for the other two categories, I will get to those later.

RPG of the Year. I will have to admit you all got this one pretty much right. I know I’ve been a harsh critic of the Dragon Age series in the past, but Bioware finally got it right with Inquisition. It finally did the one thing that the other two games didn’t do…keep me interesting. Origins was flat out boring, and Dragon Age II was flat out dull. Inquisition is just fun, and now with the first DLC being released on Xbox One for the time being (sorry PS4 honks, you’ll have to wait,) I’ll be sure to go back to it soon.

Family Game of the Year. Imagine my lack of shock to find out it would be a Nintendo game to win this, but I’m not complaining. Again you all got it right. Mario Kart 8 on the Wii U is amazing. You’d figure when you get to the 8th game in your series it would start getting a bit stale, but someone Nintendo keeps the Mario Kart series fresh, and I know those who will all group together on the console and game pad to play. Heck, if it worked for 7 where families are pulling out their own individual 3DS’ to play, why not here. Again, good pick.

Sports Game of the Year: I don’t normally watch soccer, in fact I like to ridicule it (especially when you have great moments like Brazil’s epic meltdown to the mighty German team during last year’s World Cup. Their tears are like cotton candy to me.) However, I will not deny how good a game FIFA 15 is. This year’s sports games were pretty much a disappointment. Sure Madden 15 is a vast improvement over last year’s Gen 8 debut, and NBA 2K15 finally added a shooting meter to make it easier for me to actually score. But then we had moments like NHL 15 coming out barebones and featuring perhaps the worst goaltender AI since NHL 2001. But FIFA 15 continues to evolve the series, and if it can win over a soccer critic like myself, maybe there is hope for the series. Again, you all got it right.

Strategy Game of the Year: I will admit I never played Supreme Ruler Ultimate. The truth is the only new strategy game I really played last year was Civilization: Beyond Earth which would make it win by default. However, as the game felt pretty much like a reskin of Civ 5, it would not be enough for me. So I’ll give you all a pass on this award.

Puzzle Game of the Year: Same story here with Atlantic Quest. I never played it, but there are a lot of puzzle games I played, but they all have the same problem: micro-transactions. Any puzzle game that forces me to pay to beat it will be disqualified. Another pass here.

Simulation Game of the Year: Seriously? A chess game won as a simulator? Again I did not play this game, but I don’t see how a board game could win as a simulation. Maybe if it has amazing AI to compete against, then maybe the award would seem legit. Sadly the closest game I could consider for this category would be Forza Horizon 2, but the Horizon series is more arcade than simulation. I’m sure next year when Forza 6 comes out we will have this discussion again.

Best Environment: Okay, if there are any awards that made me ask “WTF” more than any other, it would be this one. Seriously? Watch_Dogs? Where do you see this having such a great environment? It’s nothing more than a sandbox version of Chicago with a hacking element just slapped on top. Sure being able to tap into other peoples’ phones is a nice little novelty but it wears out way too quickly. How about something like Alien Isolation, a game that is so creepy and haunting to the point where a player jumps at seeing DUST on the ground? Don’t believe me? Just watch my friend Desirai’s reaction to how creepy this game is! Or how about Sunset Overdrive and its use of self-aware humor? Calling out NeoGAF for complaining about a fake ending was a stroke of genius, as well as the built in Sunset TV channel that is a dead on parody of YouTube celebrities, and let’s not forget the main character…oh wait…we’ll get to that.

Best Story: Another one I didn’t play, or even heard of before today. Another pass

Best Original Soundtrack: DESTINY? REALLY? I’m not even going to comment on this. You already know how I feel about Destiny to begin with. My pick would have gone to Wolfenstein: The New Order. Sure it might have some “covers” by a fictional German band, (House of the Rising Sun will still never sound the same to me ever again,) but the rest of the soundtrack is outstanding. That should have won, and I’m sure Old Blood will continue this tradition.

Best Male Game Character: This one will be a contradiction for me. Trevor Philips is an awesome character. After all, he won my award for 2013 Badass of the Year. But the problem is that, he’s a 2013 character. With the recent trend of remastered games coming out to X1 and PS4 we are seeing them come back on this year’s lineup. I might have given the award perhaps to the snarky lead character in Sunset Overdrive or maybe Deathshead from New Order in all his creepy glory. But the truth is, and this is where Far Cry 4 should have won, Pagan Min in particular. I had my doubts about Min after the awesomeness that was Vaas in Far Cry 3, but where Vaas was a total psychopath, Min is the perfect troll with the way he taunts you during the whole game. Even his last comment was troll worthy: “you can have the kingdom, but I’m taking the helicopter.” (And yes, I shot the helicopter down afterwards.)

Best Female Game Character: 100% agree on this one. Cereza, aka Bayonetta is as awesome as she was in the first game. And yes, she does show elements of a strong independent, yet very sexy female character. Sure there are those who are going to claim she is another typical misogynistic stereotype, but keep in mind the character was designed by a woman (Mari Shimazaki,) so she knew what she was getting into. Anyway, glad to see Bayonetta back, and glad to see you made the right pick.

Now for the console awards. These have always been a lightning rod for me. I’ve always said the award should go to a console exclusive game, and we should also have another category for multiplatform titles. With the exception of the Xbox One and Wii U, all the awards were for games that were on other consoles. Yes I know the Xbox 360 and PS3 are slowly dying out, and that PS4 AAA exclusives were quite limited, but still there were some exclusive games that could have won instead of a multiplatform title.

But for the exclusives that won, I agree and disagree. For the Xbox One, I would easily have picked either Sunset Overdrive or Forza Horizon 2 over Titanfall. As for the Wii U, Smash Bros is the perfect choice, though Bayonetta 2 would have easily been a close second.

And that brings me to my Game of the Year. If you all remember my awards earlier this year, I gave it to Smash Bros on the Wii U, and I still stand by that decision. I’m actually surprised Far Cry 4 won. In fact it wasn’t even on my top 5 of the year, though it did end up on my Honorable Mentions list. It’s a great game, yes, but not Game of the Year material.

I know there are those who will disagree with me on this (when has that ever not been the case?) But again, this is my opinion and I completely stand by it. It’s been like this since the first awards (and yes, I still feel that the original Starcraft was badly snubbed.)

(Special thanks go out to John “PsychoVandal” Henry and Desirai “SickNdehed” Labrada from A Match Made In Halo for allowing me to use footage from their Alien Isolation Twitch stream. Sorry about the dust joke though. Check out their Twitch stream.)