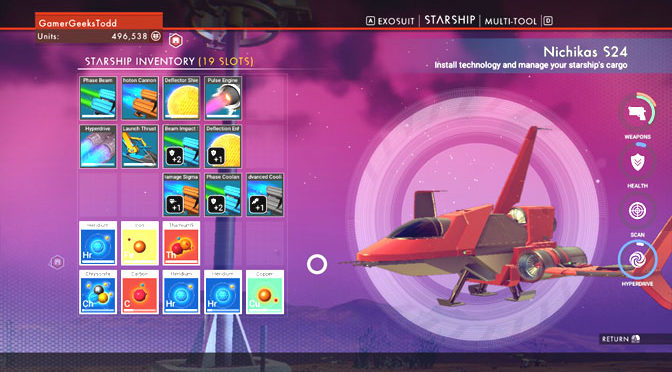 Ok, I think it’s time I come clean with all of you. If you remember two weeks ago, I did not write a column, and the official “word” was that I was taking a short vacation. That is partially true. I needed a vacation from writing, but it was far from an enjoyable experience. My “vacation” was spent looking for a new place to live. Yup, I was given a notice on the 30th of last month from my landlord telling me that he was going to sell the house. Since then I’ve been trying to find a new location, and thankfully as of this writing, I was able to find a new home and this column is the last one that I wrote from the former location.

But, I’m getting ahead of myself as this column is going to be about what I went through to play No Man’s Sky. However, the relocation notice was the first sign of trouble of how I might not be able to play. That’s because in order to help procure the funds to cover the move, the rent, and the security deposit, I had to sell some of my more valuable items. My Tetris cocktail table that I won at E3 2006? It’s now in South Carolina after I sold it for $700. My Kylo Ren Force FX light saber? Sold for $150. My Power Rangers Legacy Dragon Dagger? Sold for $100, and then there is one more item that I know my selling will result in potential death threats from fanboys: my Limited Edition Destiny Taken King PS4 with a built in 2 TB hard drive sold for $400.

Join Todd in space with a copy of No Man’s Sky from Amazon!

And yes, the reason I held on to my PS4 was so I could play No Man’s Sky, but when you get hit hard like this, you have no choice sometimes. Thankfully there was still the chance I could play NMS on my PC, and when I looked at the system requirements for the game, I figured it would run quite well. It only required a Core i3, 8 GB RAM and a GTX 480. Considering my rig has a Core i7. 16 GB RAM and a GTX 960m, that would be more than enough to handle No Man’s Sky, or at least I thought.

My first sign of trouble came at the PS4 launch on Tuesday. I thought the game would also come out on PC that day, and then I found out the PC version would not be released until Friday. Then Friday rolled around and I thought it would unlock at midnight…

Lana’s right. Steam didn’t unlock the game until 1 PM that day. While waiting, I found out that was standard routine for Steam. Considering how both Xbox Live and PlayStation Network unlock their games at 12:01am the day it’s meant to be released, why does Steam decide that 1pm is the best time to unlock games? Get with the times, Gaben!

So 1pm comes along, and I finally am able to download the game and try to start it. It’s going to start up fine without any issues, right Lana?

Game does not start. Although I will admit this time it was partly my fault. While dealing with the move I had another disaster on my list. My laptop fell off a table and as a result the hard drive was corrupted. I ended up having to buy a brand new hard drive (albeit a 2TB instead of 1TB) and reinstall Windows 10 and all of the ASUS ROG drivers to get the laptop back in working order. However, I didn’t test too many Steam games and found out I needed to update some extra codecs to get the game working. So I get that done, and I thought the game would finally run. Well, it did. Just not well.

The performance at the default 1080p medium settings was awful. Despite the frame rate counter stating the game played at 40 frames per second, it seemed like it capped at 20, sometimes even falling as low as single digits. Keep in mind this is a laptop that plays Fallout 4 at 900p Ultra at 60 frames per second! 40 frames per second on the same settings with Far Cry Primal. Heck even the virtually unplayable Homefront: The Revolution ran surprisingly well on it. But not the case with No Man’s Sky! In fact, I had to set the graphics to these settings in order to get the game to run at a somewhat decent pace:

You’re not reading this wrong. I have to play No Man’s Sky at 720p LOW detail in order to get it to work. Performance on planetary surfaces is downright abysmal! After doing some research, I found out that I wasn’t alone. The PC version is apparently an un-optimized port of the PS4 version, which started to make me wonder. Did Hello Games intentionally gimp the PC version in order at Sony’s request to make the PS4 version look superior?

Considering the numerous negative reviews posted on Steam, I wouldn’t be surprised. No Man’s Sky has a Mixed overall reaction where 56% out of 42,782 reviews as of this writing are positive, but keep in mind some of the positives are sarcastic, such as one that says “at least the refund button works.” There are even those who are comparing NMS with the disaster that was Batman: Arkham Knight on the PC. Since I played that on the Xbox One, I cannot vouch for how bad it was.

Eventually I was able to get started on the game, and after spending hours on the first planet just trying to get the parts I needed to repair my ship and blast off, I started to enjoy the game for a while. Going on into space actually made the game run much smoother than it does on planets, but then more trouble started showing up. For one, knowing that I needed to keep a supply of plutonium ready so I can refill my launch thrusters, otherwise I would end up stranded on a planet, which actually happened. Go figure it was a planet where supplies of plutonium were very trace. Yes, there were cases of plutonium near save beacons, but not much. And it was then that I learned how much the inventory system completely blows. I finally locate a rich supply of plutonium. I try to mine it and am greeted with…

NO FREE SLOTS IN SUIT INVENTORY!

And even worse, once you mine something and cannot put it in your inventory, it’s gone for good. They could have at least dropped it on the ground like in Diablo III or allow you to drop another item before you collect the plutonium, but nope, it’s gone forever. The Destiny-like inventory system badly needs an overhaul. Thankfully later on I was able to upgrade my suit to add more slots. And after landing on planet where I found THREE suit upgrades, I was able to get my suit to this level.

As well as my current ship here:

Still, I don’t know. With all the issues I have had with this game, I am still playing it. I don’t know why. Maybe it’s because I like exploration. I love Elite Dangerous with all the exploration that is possible in that game, and while I became more of a space trucker and a drug dealer in that game, I could not get into the mining because of how slow it is, let alone making sure my refinery is completely operational. Mining is so much easier here and it almost rivals that of ARK: Survival Evolved (though that game is smart enough to use a weight setting instead of inventory slots.) I’m currently four systems into my journey and I know I’ve got a long way to go until I reach the center of the galaxy. I hope to get to it, but then there are moments like this that make me want to facepalm.

This game needs a lot of work, especially on PC. I know there is an “experimental” patch that is in beta right now, and should hopefully be online by the time of this posting, but we’ll have to see for ourselves.

Waiting for: Deus Ex Mankind Divided (Xbox One or PC)

8/21 PATCH UPDATE: After this column was posted, I was able to test out No Man’s Sky on my laptop with the recently released “3xperimental” patch. After an initial startup process that caused my laptop to run as low as ONE FRAME PER SECOND, it seemed the patch has resolved many of the performance issues of the game. Granted there are still a lot of times when the game bogs down to access the hard drive, but in the end, when all was running according to plan, the 720p Low settings mode I originally played in now ran in upwards of 90 frames per second. Upgrading the graphics to 900p Medium settings kept most of the game running between 40 and 60 frames per second, with it dipping down to 30 for elements such as activating a signal beacon. I will give Hello Games credit; this is a good start. But they have a long way to go if they expect this to beat Elite: Dangerous.