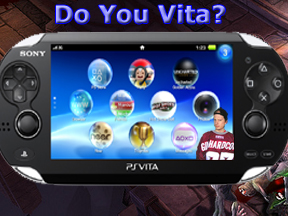 Tax time is upon me again, and just as in previous years, I ended up with a nice little refund. Usually I take this time to look towards spoiling myself and purchasing something that I normally can’t afford due to bills, clothes, food and housing, you know, the normal barriers that prevent me from excess.

In the past, this usually is spent on a new laptop, new cell phone, and one year, even a new television. But this year I purchased a new Android gaming tablet (the ASUS Transformer Prime) and still have a fair chunk of change left.

By the time this column is out, the PlayStation Vita will be out in stores. In fact, it was released this past Wednesday (unless you were one of those who bought the First Edition Bundle the week before) and as many of you know, I have been on the fence about whether or not to purchase one.

I have looked at the Vita since it’s announcement at E3 2011, and from what I see so far, it looks like a darn impressive piece of hardware. I am a big fan of the Samsung Super AMOLED display (based on my experience with my Galaxy S phone) and if the Plus version on the Vita is the same, I will be blown away with the display’s color depth.

The addition of a much needed second analog stick will be what fans of the original PSP have wanted from the start without having to buy an external shell, as is the case with the 3DS.

Seeing the touchscreen interface is quite impressive. CNET referred to it as a cross between Android and webOS, two mobile operating systems I am familiar with, and they sound promising. I’m curious as well as to how the rear touch panel will work out. The Vita is impressive technology.

I’m also looking forward to all the games coming out. Not just those that will be available for the Vita, but also those I missed playing on my original PSP. Sure I don’t have the discs anymore but I can get the ones I wanted again from the PlayStation Store and transfer them right onto the Vita.

Yes I am still hesitant about using my credit card info after last year’s security breach, but I can always purchase a game card from the store and use the funds that way. Just to be able to play Gradius Collection on the Vita will be worth it.

I so miss Gradius Gaiden, and I still wonder why Sony will not offer the imported version on the store, but just the PSP game.
Yes, I know I ripped on the PSPgo for the exact same reason, but what killed that was the PSPgo was designed for games that originally ran on the UMD format that the Go lacked, and Sony’s refusal to offer the Passport system to UMD owners was a red flag. I have since traded in my PSP and the games that went with it, and I know I will have to repurchase the PSP games I want, but I will bite that bullet.

But there are other factors that are a concern for me. For starters, it’s the choice of the system I want. I could have went with the First Edition Bundle that came out last week. For $350 it would have come with a 3G enabled Vita, a Limited Edition Case, a DataConnect Season Pass, the game Little Deviants, and a 4GB Vita Memory card.

But that system is a turn-off for several reasons. First of all, I do not want to get a 3G enabled Vita, especially since Sony went with AT&T for their data services. It’s the WiFi only version that I want to purchase, with the base system costing $250.

But there is also a caveat for getting the base system, and this is the huge concern for me. I still need to purchase a memory card. In what they claim is an attempt to combat piracy, which was common on the original PSP, the Vita’s memory cards will be a proprietary format, and as a result, they are very expensive. A 4GB memory card will clock in at $20, but the high end 32GB memory card is $100! As a comparison, other handheld devices, namely Android tablets and cell phones, use microSD cards, and a 32GB card can be found for about $40.

I might end up just getting an 8GB card for the time being. After all, I won’t use the Vita to watch movies, because unlike my Android tablet, which can play multiple video formats, the Vita will only play MP4 videos, meaning I would have to convert them using a program such as Handbrake and then transfer them using Sony’s proprietary software. It would be too much of a hassle, so I would just use the Memory Card for games.

I am hoping this will get resolved in future software updates, and I’m sure it will. Look at how much the PlayStation 3 has changed since its somewhat lackluster launch.

So the PS Vita is very tempting. The technology looks quite amazing, and I’m still wondering whether to purchase one. I guess I’ll mull it over a bit more before I make my final decision…