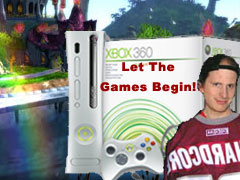 (and it works fine)

Lately it seems that obtaining an Xbox 360 is like searching for the Holy Grail. All the stores, as expected, are sold out and when new shipments arrive, most of which I checked out are arriving in single digits, they are snatched up or given to those who pre-ordered. Even online retailers, with their exorbitant bundles, are no longer taking pre-orders.

My preorder, in particular, has still yet to be fulfilled. The store I preordered my system at gave away only 50 so far. Another 44 to go until I receive mine.

But to make matters even worse, for those who have been able to acquire an Xbox 360, there have been reports about consoles malfunctioning. Images posted over the Internet display the 360 crashing during a game of Project Gotham Racing 3, with another image displaying an error message. According to Rumor Control on Gamespot, aka the "(insert company name here) does not comment of rumors or speculation" section, is reporting that Microsoft is aware of isolated hardware defections, and have offered to overnight shipping boxes to those with problematic consoles. They have also claimed that said consoles will be either repaired or replaced within five business days.

I'm hoping that this situation will be settled, but I am not so confident. Not only does Microsoft have to deal with the US launch, but also Europe, Japan, and the rest of the world for that matter. To complicate matters, Peter Moore stated that Microsoft will ship out three million Xbox 360 consoles by year's end.

I'm sorry Peter, but I don't believe you. If you remember correctly, you don't have a strong track record in my opinion. If you were true to your words, then I would have a happy Dreamcast ending after playing through Shenmue II rather than waiting for the Xbox version to come out.

Even with all the troubles that Microsoft might be having with their X360 launch, on the bright side, in my last commentary, I wrote about having to take "desperate measures" in order to procure my own system. Now that the launch is behind us, let's take a look at the final results, which I'm pleased to say, had a happy ending.

Let's being with the bundling. Online retailers such as EB and Gamestop still have bundles listed on their website, and I'm sad to say that they will be here to stay for a while. However, every bundle listed (even the insanely priced $4,000 plasma TV bundle) are listed as "Sold Out." This would seem like a strike, but since I'm anti-bundle, we'll just call this Ball 1.

Next is the eBay matter. As expected, hours after the launch, Xbox 360 consoles sprouted all over the web. At the minimum, prices were hovering around $525 for the Core System, and upwards of $800 to 1,000 for the Premium Package. Add the potential of bundling, and the price goes up significantly.

But nothing can be more significant as one eBay listing that I noticed, with an unheard of $13,000 final bid! Even more shocking is the fact that the auction listing was for a CORE SYSTEM! What moron would spend 13 grand for an X360, let alone just a Core System? However, if you look at the feedback ratings of those in the bid history, and they all have feedback ratings of 0.

From my experience on eBay, a 0 feedback rating usually means a deadbeat bidder, and with the final price coming out to $13,000, there is little doubt that this transaction will not be fulfilled. But still, having to pay $800-1,000 is still way too much for me. Strike 1.

Another option I had was getting a friend of mine to buy a second X360, and pay him right after he gets it. The day after launch, I called my friend, and he told me that he was unable to locate any extra systems. Strike 2.

That left one other option, to brave the lines myself. Last Monday I decided that I was going to wait in line at a Best Buy to pick up my own 360. I was originally told that the store in question would have 75 units, and the line would start at 5pm.

Having been screwed over in the past, I decided to leave my apartment at 12:30pm, and my hunch was right. There were about 25 people ahead of me already lined up, so I decided to wait in line as well.

It was a difficult wait at first, because around 1pm, it started to rain, and didn't stop at all. Fortunately the others waiting with me were nowhere near the crazed mobs we heard about in the press. One guy's wife set up a tent that he didn't want to use, so he let me use it. Other people actually went to McDonald's in the same shopping area and brought me lunch. What happened to the mobs? The robberies? The near riots? They were nowhere to be found here so far.

Sure there were those who jumped in line, but those like myself who waited patiently were able to alert Best Buy staff, and they at first said that if you leave your place in line, you will be sent to the back of the line. Naturally that caused a problem in case someone needed to use the bathroom, so the next idea was to write up mini-vouchers. Ripped out of an employee manual, each strip had a number on it, which would eventually be traded in for a TRUE X360 voucher. The system count was also revealed as well, and it was actually a mind blowing 200 systems: 140 Premium Package and 60 Core Systems!

To make the matter even better, with voucher in hand, I was able to hold my place after all, using the rented tent as a holder. As a result, I was able to wait inside Best Buy, get a hands on of Madden 06, Perfect Dark Zero, and Project Gotham Racing 3. I mostly played Madden, because I didn't want to spoil the other two games. Being able to wait inside, as well as avoiding the rain and crowds, was a breath of fresh air. At least until 10pm.

After Best Buy closed at 10pm, it was back to waiting in the rainy cold. Despite being armed with my XM MyFi, the two hours seemed to take forever. It went even slower when the real vouchers were given out. Having received number 27 (not number 19 as was previously mentioned), I felt relieved that all the waiting was worth it, and when midnight got there, I entered Best Buy, picked up my X360 Premium Package, along with a Play/Charge kit, paid it off on my credit card and rushed back to my car before I got mugged. Fox 5 tried to stop me and do an interview, but I pushed them aside saying "no comment."

I didn't play much the first night, because I was so tired of waiting in line so long, but I did simple tests such as DVD playback quality test (which is even better than that of the original Xbox), access to Live (which worked out just as well), and image quality on my HDTV, which despite being only a 1080i tube set, looked stunning.

A few days have passed, and I started to hear reports about crashing 360 consoles. Even after seeing the pictures online, I still had doubts. There were always reports of crashing systems in the past: skipping PlayStations, PlayStation 2 consoles with Disc Read Error problems. Defective Thompson DVD drives on Xbox 1s, and of course, dead pixels on the PSP. Defections are commonplace in launch titles, but I asked my friends if they had problems with their systems. They, like myself, have had no problems at all, but we all made a consensus about the overheating issue, wondering if those who reported crashes are keeping the system (as well as the power supply) well ventilated. Come on, it's common sense to not lie a console on a carpeted floor, or in a crammed space with no ventilation at all!

Since picking up my 360, I got a good amount of time in with four of the key launch titles that were made available, and I am able to provide mini reviews of all of them:

To start off, I was shocked to see Rare release PDZ on launch day. Rushing through the final testing procedures to get the game shipped out was a big risk, but it seems to have worked. Game quality is impressive, and those who are fans of the original PD should feel quite at home. Visuals are definitely adequate for the 360, even if the characters look a little cartoony compared to the original, and the voice acting is kinda laughable. But if there is anything that really irks me about PDZ, it's the fact that anyone who gets a headshot stands up without a problem. Now wait a second? I shot him with a Magsec 4 in the head, and he just brushes it off? What happened to the rule about head shots being an instant kill? Oh well, at least they are with the Jackal sniper rifle. 4 1/2 GEMS

The flagship title of EA Sports' franchise looks gorgeous, there's no doubt about it. Finally the jerseys are accurate, right down to the type face on the names and the warning labels on the helmets. Gameplay however is basic. Aside from single play, franchise mode, and Xbox Live, there's not much else. No Owner Mode, no Superstar mode, no Madden Cards, and I can’t even let the computer play by itself, meaning this year’s Hardcore Bowl might have to be cancelled. Oh well, at least the gameplay is dead on, and for the first time in who knows how long, I can actually play on All-Madden mode without having to adjust any of the gameplay sliders. 4 GEMS

In what might be the biggest surprise on the Xbox 360, Call of Duty 2 might just be a port of the PC version but it looks much better. Featuring some of the most realistic smoke effects on a console, the gameplay can be best described as intense. Never before have I been able to watch hordes of German soldiers come at once without any critical slowdown. And being one of the first 360 games to run at 60 frames per second doesn't hurt either. 5 GEMS

Now this wins the award for most beautiful game on the 360. The car models are spot on, as well as the recreations of New York, London, Tokyo, Las Vegas, and the Nuremburg in Germany. Blur effects actually look real for a change, and believe it or not, it actually increases the frame rate so it never looks like it's running at only 30. Try racing in Las Vegas at night and tell me that you're not impressed with the visuals. Like its predecessor, PGR3 takes full advantage of Xbox Live, even allowing spectators to watch full races, be it friends or the best racers (aka Gotham Heroes) on Gotham TV. The single player mode might be a little short, but it's the multiplayer where Gotham 3 will really shine. 5 GEMS

In my opinion the X360 is off to a great start. I didn't fall for all the stories about defective consoles and am actually looking forward to the next wave of 360 titles. Bring on Gears of War!