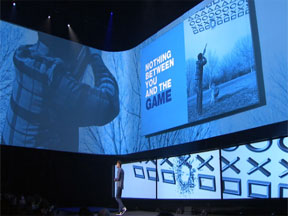 Should Gamers Be Getting Ready To Buy The Next Great Console?

With a roaring show that was equal to any E3 extravaganza, the next generation console from Sony was revealed this week. We didn’t learn all its secrets, but there was a lot of details offered for information-hungry gamers.

The PlayStation 4. Yes, that will be it’s official name. Really, it’s all we’ve been hearing about the past few weeks since Sony announced the sort-of-secret press briefing to take place at the time of this writing. If you all remember a few weeks ago I wrote about my concerns about the next generation Xbox and whether or not it will play used games, and of course its always-on internet DRM.

But now the PS4 briefing has concluded and we know all that Sony would tell us so far. Apparently the so cleverly named PlayStation 4 will run on an ‘supercharged PC architecture’ with an X86 CPU and 8 GB of GDDR5 memory, as well as a secondary processor which is used for performing downloads and game updates while they are being played.

The new, also cleverly named, controller called the Dual Shock 4 was on demonstration, and while the most of it looks like previous Dual Shocks, it now features a touchpad similar to that on the back of the PlayStation Vita. There is also a sensor that makes the controller function like a PlayStation Move. But in a move obviously taken from the Kinect and the original Wii, it will use a camera called the Light Bar. Once again, it looks as if Sony is taking another competitor’s idea and using it for their own. Remember how the PS3 took the Wii’s motion control with the Sixaxis and ultimately the Move? Well now it’s the Kinect that is the inspiration for the Light Bar. Bit of a trend?

There might be, at least in terms of backwards compatibility. As if the later model PlayStation 3s not playing PS2 games isn’t bad enough, the PS4 will not natively play PS3 discs. Instead, the PS4 will go the way of OnLive and Steam, and stream not just PS3, but PS2 and PS1 games via their Gaikai streaming service. I’ve never been a fan of such streaming services, and I fear that lag issues might affect these cloud based games, though Sony says that with Gaikai, you can even start playing games before they are fully downloaded. There is a secondary chip that handles all the download issues, keeping the main processor free for gaming. Supposedly the console will also figure out what you like to play and have those games ready to go before you even buy them. Shall we play a game?

And though it hasn’t been mentioned in the briefing, I still have to wonder on the used game situation. Keep in mind that in January, that Sony patented an ‘anti-used game technology’ for possible use in the PS4. We have heard the rumors about the next Xbox using this technology, and if the PS4 uses it, the only console that will allow used games would be the Wii U.

Editor’s Note: After the briefing, a reporter from Eurogamer asked Sony officials this question directly. Their response was that when gamers buy physical media, they should be able to play it wherever and however they want. They went on to directly state that the PS4 would allow used games to be played. So that controversy seems to be finished, at least for the PS4.

The PS4 is also capable of recording all gameplay as it happens to send online and show your friends. I only hope that all the attempts to censor such footage such as SOPA, PIPA, CISPA, and even what Sega has done with Shining Force III videos never happens to mess this up. If they stay away, then this PS4 feature would really improve the longplay/let’s play community on Youtube.

But as for the games themselves, a few have been shown, including a new IP called Knack, a new Killzone, a new Infamous, Bungie’s latest called Destiny, and the first console appearance of Diablo III (which will also come out on PS3.) But of course, there is still no mention of the impending vaporware called The Last Guardian.

And of course, aside from the previously mentioned used game issue, the other announcement I was waiting for was not mentioned: the price. All we need is to hear another ‘599 US Dollars’ outcry when the PS4 is released, but thankfully we do know it will come out this holiday. And who knows, perhaps it will be released at a good price. You can bet there will be multiple tiers of machines.

I must also wonder, is it too soon for Sony to release the PS4, or are they having remorse over what the PS3 is capable of? Keep in mind the PS3 came out on November 2006, which means the PS3 will only have a 7 year life cycle, whereas the Xbox 360, with its November 2005 launch date, is still running strong despite at least an 8 year life cycle. Then again, the Wii’s life cycle is only 6 years, with the Wii U’s launch last November.

I’m guessing we’ll hear more about the PS4 come E3, but until then the jury is still out on whether or not I will personally get one. Of course there is also the announcement of the next Xbox for me to make my final decision on the next generation machines.