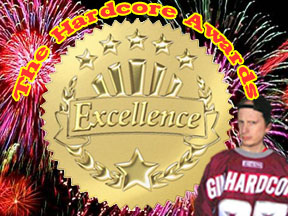 So what happened to me in 2011? Well, aside from going to my second ever MAGFest in January and getting back on the PlayStation 3 system (just before an event that will be mentioned later occurred) it had been a pretty uneventful year for me. Sure, I had tons of great games that came out the last few months, but in all, 2011 was a pretty slow gaming year for me.

Still, I have my moments, and there were some I wanted to give special mention to, as well as praise to those who impressed me, and of course, curse those who really fueled my fire. So again, it’s time for this year’s Hardcore Awards.

Now keep in mind that I will not be mentioning my picks for best and worst games of the year. For the third year straight, both Kelly and I will be doing a special GamerGeeks season finale (although Season 5 should just be considered the "lost season") where we make our picks. These are special awards that I want to make sure they get their own special attention.

To start off, I want to give a new award, which I call the "180 of the Year." This award is given to a game that I once hated, but then eventually enjoyed playing a lot. It goes to Deus Ex: Human Revolution. Those of you who read my column last summer know how much the early parts of the game infuriated me, especially when trying to use stealth during the Police Station mission. I was so close to quitting the game and putting it into the trade in bin. But I persevered, finished the game, watched all of its endings, and am glad I did. The rest of the game was very enjoyable, and a surprising turn of events leading up to the original Deus Ex.

Another game I ended up doing a 180 on actually wins another award, which is for the "Most Criminally Mistreated Game of the Year." In my opinion, the so called "professionals" (and you know who you are) ripped Duke Nukem Forever to shreds. I KNEW when the game came out it wasn’t going to rival Modern Warfare 3 or Skyrim or any other Triple A game. What I got was an enjoyable flashback to 1999 with a slightly modern twist, as well as the crude humor I was used to in DN3D, and of course, the return of Jon St. John as the main man. I am still playing DNF, especially with the release of the "Doctor Who Cloned Me" DLC, which brought back Duke’s first nemesis, Dr. Proton, who ironically was to be involved with DNF early in the game’s long development cycle.

Yes, this game is not great, but it is NOT as horrible as some people have said, and I stand by my "slightly above average" rating of 3 out of 5 Gems. It should NOT have been treated as badly as it was!

Ok, enough with the good. Time to start going off on the bad. You all know how I feel about those who sell out in this industry rather than support everyone equally. As a result I have my first ever "Sellout of the Year" award. Technically this should have been given out last year, but since Portal 2 came out this year, and Gabe Newell decided after all of his comments against the PS3 to give them the better version, while making the 360 and PC releases look inferior, one has to wonder how much cake Sony offered to him to kiss up to him like they did.

Speaking of Sony, they aren’t out of the woods yet. While part of it isn’t technically their fault, they are the co-winners of the "Clusterfrak Moment of the Year," as it involves the PSN Security Breach. The other winner of this award are the hackers that did it, stemming from the outrage over Sony suing George "GeoHot" Hotz for jailbreaking the PlayStation3 and posting the root codes. Sony, to their discredit, did not even bother to warn PSN members that they may have had their personal information leaked until ONE WEEK after the hack. Way to provide trust to those who provide information to you, Sony. Sure, they apologized. I admit that Jack Tretton’s comments at E3 were sincere. And yes, there was a nice little compensation package that came out of it. But still, the damage was done, and from now on if I want something from the PlayStation Network, I have to buy a prepaid card from the store to get it.

But is Sony the worst, or even, the dumbest offenders this year? No, believe it or not that wasn’t even close. Even to this day I am still getting candidates for "Dumbass of the Year." Just a few days ago, PR rep Paul Christoforo of Ocean "Marketting" nearly stole the award with his now infamous reply email to a customer checking on the status of his "Avenger Controller," a rant that has been covered to great extent by Penny Arcade, and even turned into a hilarious video parody on Youtube.

But no, one PR rep did not do as much damage as a whole company did, and that one company was CAPCOM. Talk about a company that is on a downward spiral. Yes, they are a company notorious for milking their franchises, but why in the name of all that is holy in games did you have to KILL off two games from one of your most respected franchises? Both Mega Man Universe AND Mega Man Legends 3 were cancelled and the response was apocalyptic.

Why do it Capcom? Is it because Keiji Inafune left your company last year and you aren’t going to make any new Mega Man games? And that’s not the worst of it. As if DLC leeching wasn’t enough to make us mad, look at what they did with Marvel Vs. Capcom! They ruined the control scheme with MVC3, making the game barebones compared to the excellent MVC2, and made the netcode as basic as ever. No spectator mode or fight view mode that the far superior Super Street Fighter IV had? Making us pay for DLC characters to add to the already weak roster?

Oh, but that’s not enough. What do they do a few months later? Announce ULTIMATE Marvel Vs. Capcom 3! Add 12 new characters, 8 stages, the spectator mode the original should have had, and force people to pay $40 for the whole disc, instead of offering it as a DLC option in the same way Super Street Fighter IV did with the Arcade Edition add on. So it appears that Capcom cares less about its fans and more about how much money it makes, but the moves they did this year are just mind-boggling.

But enough negativity, I’m not Yahtzee, after all. There were some very impressive events that have taken place this year, and one I was really proud of, and in fact, it’s surprising to many that it will get my "Holy ****! Moment of the Year" award. Whoever thought that a fan based developer can work on a game for eight years, writing every line of code from scratch with no reverse engineering whatsoever, can make a game that far surpasses what the big companies would do? That’s what Bomberlink and his cohorts at Bomber Games did with the phenomenal Streets of Rage Remake, an SOR fan’s dream come true taking everything that made the Genesis trilogy so amazing and mixing it all into one sweet package.

Of course, leave it to the Grinches at Sega Europe, who had the freeware game pulled shortly after Version 5 (the final one) was released. These guys were not creating it for monetary gain; it was designed for the love of the series, and Sega had to pull it just so they can keep releasing inferior iPhone ports of the game instead of the GOOD version we all want. Please Sega, if you really want to win me over again, put this on Xbox Live! You are somewhat on the mends after releasing a great port of Sonic CD with BOTH soundtracks, but you still have a long way to go. SOR Remake would be the final block on the road to forgiveness.

In conclusion for my awards, I have to do something different for my annual "Badass of the Year "award. Originally this award was given to a game character who takes being totally and completely awesome to a whole new level. But yes I have had some that were not gaming related as well (Kara "Starbuck" Thrace from BSG 2003 is an example.) But this year I am giving it to a group of real heroes, and that is the United States Naval Special Warfare Development Group (DEVGRU.) More commonly known as "Seal Team 6," these are the guys who on May 1, committed the ultimate pwning, as they found and killed Osama bin Laden. Seeing this madman get what he deserved was a huge boost to American morale, and if you see the videos of everyone’s reaction, especially the USA chants that took place during that night’s Mets/Reds game, you will know what I’m talking about.

I didn’t know about it when it happened. I was taking a nap and Kelly called me, telling me to check the news. I couldn’t believe it happened and was still in disbelief for a while, but then it finally settled in, and the mastermind responsible for over 3,000 deaths on September 11, 2001, finally got his comeuppance.

But the best reaction I heard came from one of my favorite Youtube ranters, Gineriella. "Here’s a nod…to the awesomeness of technology. I found out Osama bin Laden was dead…over Xbox Live. America…**** yeah!"

Couldn’t have said it any better, Gines. And Seal Team 6, here’s one to you too. Congrats. You deserved it!

With that, I officially end my last column for 2011. Next week is MAGFest, and I will be covering it along with Kelly, not to mention we will give out our picks for best and worst of the year. It looks like it will be big, starting with the launch of the PlayStation Vita. Still don’t know if I’m going to get one though…I don’t like that whole proprietary memory card route they are using. Come on Sony, give us an option for SD cards. Might be an early Dumbass of the Year candidate for 2012 if this keeps up.