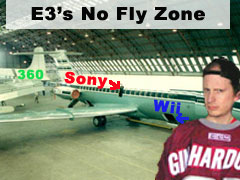 Go figure. This week is normally when I would be reporting from Los Angeles and the grand Electronic Entertainment Expo, commonly referred to as E3. In fact, at the time of this writing, I'm sure I'd be attending of the many after parties that I always looked forward to, as well as the opportunity to break in a new cell phone that Sprint would have provided me.

But thanks to the ESA and their idea to downgrade E3 to a "more intimate event," relocate the event to an undisclosed location in Santa Monica, sending out invitations to only 3,000 people, and changing the name to the "E3 Media and Business Summit," the days of great E3 shows are now a shadow of their former self.

Just recently, I have come across the final location of where the new E3 is going to take place. Aside from being in several hotels in the Santa Monica area, the heart of E3 will be taking place in, of all places, an airplane hangar!

That's right, no longer do we have the majesty of the Los Angeles Convention Center to bask under, as it will now be taking place at the Barker Hangar. From a floor plan that I obtained from a rival web site, there are only going to be 32 exhibitors on site.

The front twelve booths will be used for the big league companies (Sony, Microsoft, Nintendo, EA, Konami, Capcom, Square Enix, Sony Online, Vivendi/Sierra, Namco/Bandai, Sega, and THQ,) while the back half of the show floor will be small office style booths. But the back half has only a fraction of all their space used! Anyone who has ever been to Kentia Hall of E3s long gone will know what I am talking about. Why all the empty space in the background? Even the booths in the front of the "hall" are only 20 by 20s.

Really, Kentia Hall was where all the major innovation was taking place. Sure, the big halls like South and West with their mega displays and Army Special Ops guys running around were cool, but it was really nice to see what the developers down in the basement were doing, since that where the real innovation was taking place most of the time. And that component is what seems to be really missing from this new "more intimate event."

Yes, I know that some hotels will also be hosting events in the area, but this is not the E3 that I have known for the past seven years. Yes, the fact that there will be a smaller crowd would mean that I would be able to check out new products that would be blocked out for "appointment only" status, and would obviously keep the rabid fanboys out.

Still this is not what I want from my E3.
And again, what about the smaller companies? Those who are trying to get their foot in the door to unveil their products? Would Guitar Hero have become such a huge success if RedOctane was not allowed to have a Kentia Hall booth at E3 2005? What about 10Tacle Studios and their GTR series? Would we have even heard of them?

It seems as if the ESA is trying to push the new E3 for what I call the New York Yankees of the gaming industry, and leaving all the other small market developers out in the cold. That's not what this business should be all about! The ESA, formerly the IDSA, made no bones about being the representative of the biggest companies in the industry and their former president said as much to our reporters many times. That is how the IDSA made its money, so its no surprise that the big guys get all the glory.

Just last week, much to my surprise, I found out that I actually received an invite to attend this year's E3. I vehemently refused to go however because of what the show has become, and now take a stand for the small market developers who will not get their games shown off to an unsuspecting public.

I am now more than ever determined to see if Gamepro's E for Everyone Expo will succeed, and hope that this year's E3 will fail.

At least, if there was something good that came out of this week, I was finally able to find a Nintendo Wii to add to my collection"